MANILA – Children are not spared from rights violations. Under the administration of President Benigno S. Aquino III, the Children’s Rehabilitation Center (CRC) has recorded 14 cases of killing of children. A more recent case happened last Oct. 19 in Tampakan, South Cotabato where a pregnant woman and her two sons were killed after soldiers fired at their house. Ironically, October was declared as national children’s month.

The CRC expressed alarm over the increasing number of children victims of state perpetrated killing. Jacquiline Ruiz, CRC executive director said these killings and other human rights violations create fear, anxiety and anger among the relatives and loved ones of the victims, as well as other children in the community. “The Capion massacre claimed the lives of the mother and two children and definitely blurred the future of the five-year old survivor. In spite of the facts, the military tries to escape their accountability by accusing the victims of being affiliated with their enemies”, Ruiz said.

In an earlier report, on Oct. 19, soldiers of the 27th Infantry Battalion strafed the house of Daguil Capion at Fayahlob, Sitio Datal-Alyong, Danlag village in Tampakan.

The soldiers under the command of Lt. Col Noel Alexis Bravo killed Daguil’s wife Juvy, who was two months pregnant, and their two sons Jorge, 13 and Jan-jan, seven years old. Their five-year-old daughter Vicky was wounded. The soldiers even brought the bodies of Juvy and her sons outside their house to compel Daguil to surrender. It was only after eight hours when the soldiers allowed the relatives to attend to the remains. 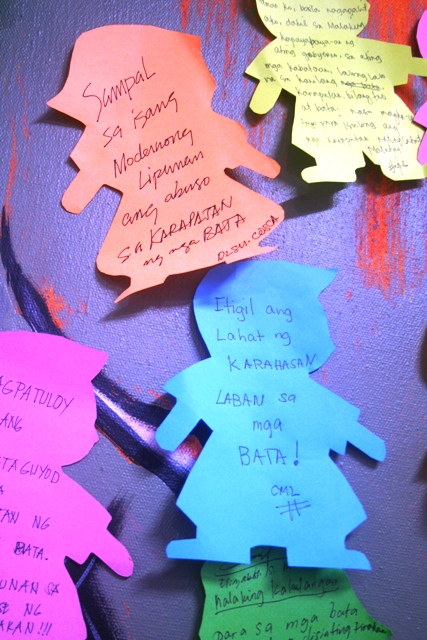 The head of the 27th IB, Lt. Col. Alexis Bravo claims that the incident was a legitimate encounter between the soldiers and Daguil. The military accused Daguil of being a leader of an armed group opposing the entry of Xtrata-SMI.

The Salinlahi Alliance for Children’s Concern stressed that the massacre of the Capion family is yet another proof that there is no substantive change even after the pronouncements of the Armed Forces of the Philippines of its supposed campaign promoting respect for human rights, including safeguarding the rights of children. “The AFP’s claim remains futile and imaginary, a mere rhetoric to win the hearts and minds of the Filipino people while violators remain unpunished,” Reina Requioma, spokeswoman of Salinlahi said.

Salinlahi executive director Melissa San Miguel said that aside from the impact on their socio-economic rights, children’s rights to life and security are also being directly attacked under Aquino’s counterinsurgency plan Oplan Bayanihan.

Under Aquino administration, CRC has documented 14 cases (including the Capion children) of killing of children, 13 of which happened in this year alone. San Miguel added that there were 18 cases of frustrated killings, 17 illegal arrests and detention, five cases of torture, five cases of children used as guides for military purposes, 10 attacks on schools and 12 branding of children as child soldiers and four rape cases and sexual assault by military personnel.

According to CRC, on Feb. 16, around 12:10 noon, Christian, Jaycee Perez, 31, “Ramon”, 15 and “Luis”, 18 were hunting for bats and frogs to sell in Majayjay, Laguna when they were fired upon by the joint forces from the Special Action Unit of the AFP based in Candelaria, Quezon and the 1st IB led by a certain 1st Lt. Nazatya. Christian and Jaycee were killed while Ramon and Luis were wounded.

According to CRC’s factsheet, the wounded were brought to the Liliw Hospital also in Laguna. The body of Christian was brought to the funeral home and was left unattended until 2:00 p.m. while the body of Jaycee was left at the site. The victims were tagged by the military as members of the NPA but their relatives firmly denied the accusation saying that they were just hunters. According to the CRC, at present, Luis who was hit in the head remained in shock and is not able to talk while Ramon is still in the intensive care unit at the AFP Medical Center in V. Luna, Quezon City.

On Aug. 8, Gaily was hit by a stray bullet at her back that resulted to her death. Between 9:00 to 10:00 p.m., residents of the Officers’ Line Compound in Marawi City, Lanao Del Sur heard a series of gun shots. The Officers’ Line Compound is near the Agus hydropower plant where the 65th IBPA was stationed. Gaily was not rushed to the hospital immediately because the military barricaded the streets and the compound. Gaily was already dead when she was brought to the Amai Pakpak Medical Center, Marawi City.

San Miguel lambasted Aquino’s inaction on the increasing number of cases of killing of children perpetrated by state agents. “The President’s inaction to curb the continuing grave child rights violations and hold the perpetrators unaccountable, only exposes his lack of concern for the lives, much less the welfare, of our children. As the government remains deaf and blind to the cries of children, the people’s movement consistently stands up to take on the role of ensuring the children’s future.”

NDFP Declaration for the protection of children

Meanwhile, the National Democratic Front of the Philippines (NDFP)’s Declaration and Program of Action for the Rights, Protection and Welfare of Children that was launched last June 29 was welcomed by human rights groups

Cristina Palabay, spokeswoman of Karapatan also welcomed the Declaration. “We see this as a relevant document amidst intensifying human rights violations committed against children. Our documentation also shows increasing cases of children being paraded as child soldiers; in one case the AFP even detained the child. We also submitted together with the CRC an alternative report in the Universal Periodic Review stating violations of the AFP and other state agents against children,” Palabay said.

Makabayan Coalition president Satur Ocampo said the Declaration is an effective challenge to the government. “While the Philippines is a signatory to different international conventions (like the Universal Declaration of Human Rights), it remained inept in addressing violations of children’s rights. The Declaration challenges the government of the Philippines to do something on violations of children’s rights,” Ocampo told Bulatlat.com in an interview.

Article I of the Declaration states that the NDFP recognizes that majority of children belongs to the lower class of the society and therefore they are often victimized of an “unjust social system.”

“In the provinces, under the guise of ‘Oplan Bayanihan,’ minors are recruited by soldiers by making friends with them while these minors are undergoing trainings,” Ruiz told Bulatlat.com.

“We will stand by our mandate to document the violations of state against children’s rights. In the first place, the government should be promoting and protecting human rights. Since it is a signatory to different international conventions; the government has a responsibility to adhere to these conventions,” she added.