It is a different kind of Halloween for the residents of coastal towns of Pangasinan. For them the scare is real and takes the form of black sand mining.

MANILA – Wearing Halloween-inspired scary costumes of the Grim Reaper, community leaders from coastal towns of Pangasinan trooped Monday (Oct 29) to the Office of the Ombudsman in Quezon City to file a prayer for the suspension of Pangasinan Governor Amado T. Espino over the issue of black sand mining operations. They explained that their attire symbolizes the scary dangers brought by black sand mining to their communities.

Aside from the plea filed Monday by AROMAS, the group has previously filed administrative cases against the governor on January 13, also with the Ombudsman. The group complains of Espino’s alleged abuse of authority, neglect of duty, violation of the local government code, as well as graft and corruption. The group also alleges that Espino has been ignoring the cease and desist order issued by the Department of Environment and Natural Resources (DENR) since January 30. It seeks to stop the extraction of magnetite from the black sands of Lingayen.

Locals of Lingayen and San Fabian of Pangasinan found out about the black sand mining in their areas July of 2011 – their efforts to stop it had led to the DENR’s cease and desist order issued January 13 this year, or about half a year since they discovered it. But “Our stockpile of black sand continues to go down – it used to be tall like a mountain,” said Oliquino in Filipino. The problem, he said, is that parts of this stockpile are being carted away “in secret at night.” 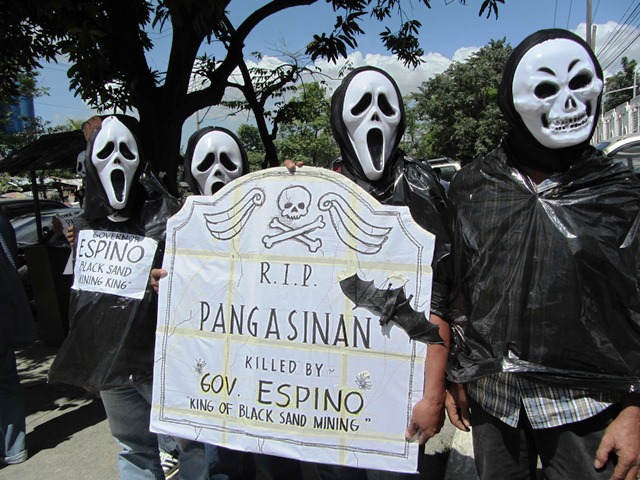 People of Pangasinan find no treat, just plenty of threats and tricks, from their governor’s blacksand mining (Photo by Marya Salamat / bulatlat.com)

AROMAS stressed that despite the DENR order, “the illegal mining activities of Governor Espino continue to happen in a numbers of villages in Lingayen and San Fabian.” They added that exporting and smuggling of black sand from the shorelines of Pangasinan to China are still being reported despite the DENR’s cease and desist order.

Although black sand mining is relatively new to their experience, the residents’ sources of water have already been affected. “What used to be potable water in areas near where the black sand mining is being done has become salty today, forcing the locals to fetch water from other areas,” Oliquino said.

Aside from calling for the governor’s suspension, AROMAS also urged the Ombudsman to act on the cases of harassment of their members. Oliquino said “The suspension of Governor Espino from office will automatically mean stoppage of this worst case of plunder to the environment, bureaucratic robbery of black sand in the province and physical harassments against individuals and organizations that are opposing these illegal activities of Governor Espino.”

Led by the local group, AROMAS or Aro Mo Ako Sambayanan (Mahalin mo Ako Sambayanan), leaders cried foul over the series of harassments against their members allegedly being initiated by the hired goons and armed forces of the provincial government.
AROMAS said they will also hold a protest caravan against black sand mining on November 21 from their province to Manila in time for International Fish Day.