You Are Here: Home → 2012 → December → 6 → One tragedy after another, Bae Adelfa Belayong stands up again and again

One tragedy after another, Bae Adelfa Belayong stands up again and again

MANILA – A few minutes before she was to speak, Bae Adelfa Belayong, 47, was already wiping her tears.

As she spoke, those who listened shed tears. Her story was too tragic to be true – one that could pass as a material for a telenovela only that everything was not a product of imagination.

In the 80s, the Nasipit Lumber Company started its logging operations in Kinamaybay, Esperanza, Agusan del Sur. Bae Adelfa recalled how state forces bombed their community to drive them away from their ancestral land. For months, they were forced to live inside a cave and were branded as monkeys.

“I did not know what to do,” Bae Adelfa said in the local dialect. “I was also thinking about my husband and my son.” It was only after two days that the family got reunited but Bae Adelfa no longer recovered the head of her beloved daughter. 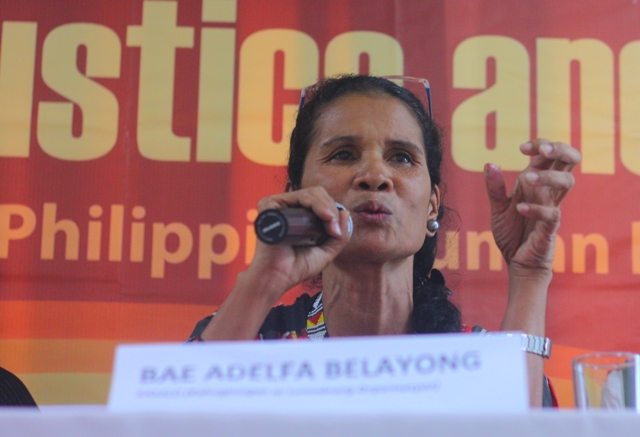 When logging operations stopped, Bae Adelfa said she thought they would live in peace at last until a Japanese mining company came.

Her husband, Datu Maampagi, chairman of Linundigan, a local Lumad organization and leader of the Higaonon tribe, refused to sign any contract for the entry of mining in their land.

On September 2, 2009, Datu Maampagi was shot dead inside their home by elements of the Bungkatol Liberation Front (Bulif), a paramilitary group created by the 402nd Infantry Brigade of the Philippine Army.

“A bullet pierced through my husband’s neck,” Bae Adelfa related. “We wanted to take him to the hospital which is two hours away from our place but he did not want us to. He said he preferred dying in our land.”

For four hours, Datu Maampagi was lying on her arms. “He wanted to talk and so I covered his wound with cloth. He told me and the other tribe leaders to continue our resistance to the encroachment of mining in our land.”
Until his last breath, Datu Maampagi made his fellow tribe members vow to continue the fight.

On June 30, 2011, Arpe was killed by elements of Salakawan, another paramilitary group supported by the Armed Forces of the Philippines.

Like Datu Maampagi, Arpe was shot in front of his family members. His wife and three of their children were able to escape. When the family went back to their house the next day, Arpe’s body was lying over his four-year-old son, who was alive but sustained a wound on his leg.

Bae Adelfa, the only elder in the tribe who is still alive, was forced to leave the community. Since Arpe’s death, she has sought sanctuary in cities.

Members of the Task Force Gantangan roam the community, Bae Adelfa said. “They told my daughter that they would behead me and would make me dance with bullets.”

For their safety, Bae Adelfa said she left her four children. They would communicate once in a while through text messages.

“I now live with uncertainties,” she said.

Bae Adelfa is here in Manila, along with more than 70 other Lumad and farmers from Mindanao. She has but one message to the government: “We are only fighting for our land. We do not want the money from mining.”