Her more than six years of searching for Sherlyn, second of her five children, led her to this court. Sherlyn, her companion Karen Empeño, both students of the University of the Philippines (UP), and farmer Manuel Merino were taken by suspected state agents on June 26, 2006 in Hagonoy, Bulacan.

Mrs. Cadapan was asked questions pertaining to her personal data and she answered almost mechanically – she is 63 years old now; a former businesswoman; a resident of Los Baños, Laguna. She said that Sherlyn, a student of the UP College of Human Kinetics, is her daughter.

Mrs. Cadapan narrated how she went to military camps, police stations; wrote to government officials; went to the Court of Appeals and to various courts – all to find her daughter, who was pregnant at the time of the abduction.

“I am tired already, physically, emotionally and even financially,” Mrs. Cadapan said. “But I cannot afford to stop.” 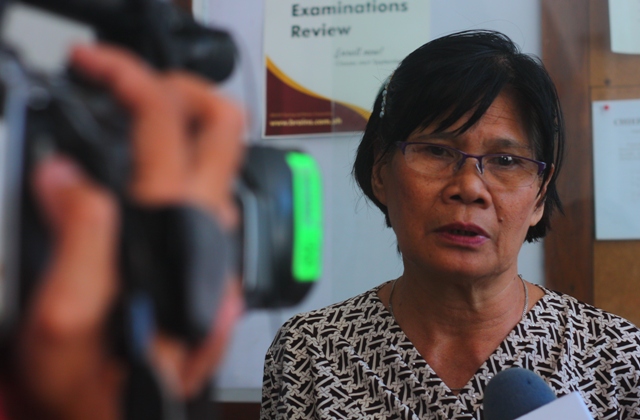 Mrs. Erlinda Cadapan tells media she will not stop looking for her daughter immediately after the December 10 hearing in Malolos, Bulacan. (Photo by Ronalyn V. Olea/ bulatlat.com)

Abner M. Torres, Anotado’s lawyer, asked Mrs. Cadapan the exact location of the headquarters of the 24th Infantry Battalion of the Philippine Army. Mrs. Cadapan said it is in Bataan. Not contented with her answer, Torres asked her to be more specific and Mrs. Cadapan admitted she could not remember.

“I did not mind the name of the town. I was focused on searching for my daughter,” she said.

Mrs. Cadapan took a deep breath before she answered: “I have not found her dead body so she is not dead.”

“Did you exert all efforts to look for your daughter?” Cruz asked. “Yes,” she replied.

“Atty. Santos said the two are still alive,” Mrs. Cadapan said, referring to a statement by Jesus Santos, lawyer of Palparan, during the January 30 hearing in the same court.

In an interview shortly after the hearing, Mrs. Cadapan told Bulatlat.com: “I wanted to throw the mineral water bottle at Atty. Cruz. They are the ones who know where my daughter is and what has happened to her. They are involved in the abduction.”

She added: “Are they testing me if I have already accepted that Sherlyn is dead?”

Mrs. Cadapan would go back to the same court in February next year for the next hearing. In the meantime, her family had to do with Christmas without Sherlyn. The last time Sherlyn was with them was during the Christmas season of 2005.

“We would put her photograph at the center of our table during noche buena,” Mrs. Cadapan said. “All of her siblings would be there.”

Asked if she has any message for Sherlyn, Mrs. Cadapan said: “My daughter, please continue to be strong and we will see each other again someday.”