President Benigno “Noynoy” Aquino III pledged to install a transparent government, the opposite of scandal-ridden administration of Gloria Macapagal-Arroyo. But a global survey on budget transparency gives his administration a lower if not the same score as during Arroyo’s.

MANILA – How does our government allocate and spend public money? How does it arrive at “savings” and who decide where these are to be spent? Does it share information about all these to the public who foot the bill and who stand to gain or lose from the budgeted projects (and from unbudgeted ones)? All these and more, with some limitations, are assessed in the Open Budget Survey, a global assessment of government budget systems held biennially by US-based International Budget Partnership.

Said to be the only independent, comparative and regular measure of budget transparency and accountability around the world, the Open Budget Survey 2012 results came out this week. It reveals that the national budget of 77 of the 100 countries assessed fail to meet basic standards of budget transparency. This means that three of every four nations analyzed fail to meet basic transparency standards, the International Budget Partnership said. With inadequate public accountability, they said poverty reduction is undermined.

The Philippines is one of the 77 countries that failed to meet basic standards or budget transparency. 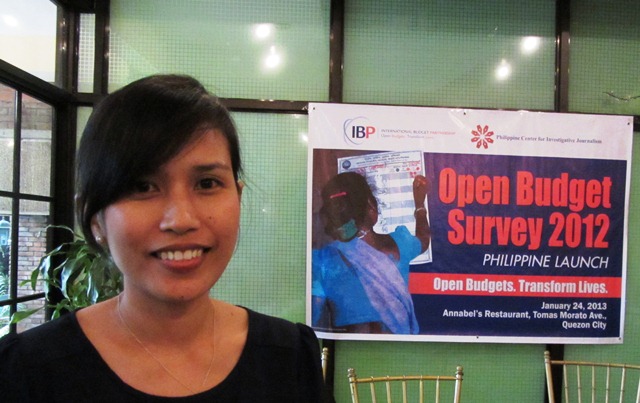 The Open Budget Survey country researcher here is the Philippine Center for Investigative Journalism (PCIJ). It conducted research for the 2012 Survey from June to December 2011, covering the latest documents available during the formulation and enactment of the 2012 budget, the implementation of the 2011 budget, and the audit reports for 2010.

The Open Budget Survey measures three aspects: state of budget transparency, public participation in the budget process, and oversight, in countries around the world.

President Benigno “Noynoy” Aquino III had pledged to install a transparent government, something he said would be the opposite of the scandal-ridden administration of Gloria Macapagal-Arroyo. Aquino’s buzzword for it is “tuwid na daan” (righteous path).

About how it managed public funds, “the Aquino government has indeed followed through with transparency reforms,” Karol Ilagan of PCIJ said in her report. But these have been proven wanting, she said.

Based on the 2012 Open Budget Survey report, under Aquino, not only did the Philippines’ score in the biennial survey slid seven points from its 2010 score (from 55 in 2010 to 48 in 2012), the part where it shows promise, the part about public participation, seems attributable more to ordinary Filipino citizens’ efforts to assert their views. Public participation is apparently still subject to much limitation and restriction. PCIJ’s Ilagan, who shared with the local media the survey results, praised the seeming progress in public participation. She qualified though that the survey “covers only opportunities, not the quality of participation,” or actual participation.

In the conduct of budget hearings in Congress, for example, the public can only listen; they are not allowed to speak. It is the lawmakers who can. Yet, as Gabriela Women’s Partylist Rep. Luzviminda Ilagan said when PCIJ interviewed them for the survey, “we were given but a few minutes to raise objections or clarificatory questions on the proposed budget.”

That is on top of the lateness, if at all, of availability of pertinent documents. The 2012 Survey found that the Philippines had published only four of the eight key budget documents during the research period.

The Aquino government and his predecessor had been consistently remiss at sharing pre-budget documents. Since 2006, much of documents about the framework of parameters for formulating the budget were not publicly available. These documents would have shed light on policy and budget link.

One of what should have been supporting documents of the Aquino government’s proposed 2012 budget, the Organization Performance Indicator Framework (OPIF) Book, was published only a week after the enactment of the 2012 budget. The said book, based on Survey guidelines, is expected to provide an explicit explanation of how the government’s policy goals are reflected in its budget choices, including both a narrative discussion and quantitative estimates.

The Aquino government shared documents to the public only starting from the budget approval stage. And even from there, survey results show it has not been fully candid.

During the PCIJ’s presentation of 2012 Open Budget Survey results, some members of civil society organizations noted that in the quest for an “open budget,” the “appreciation seems to be only in letting out the data, (but) not in terms of participation.”

Prof. Leonor Magtolis-Briones, lead convenor of Social Watch Philippines, shared that in various focused group discussions with civil society organizations (CSOs), they found government agencies and CSOs have different notions of public participation: government considers their information dissemination as already participation. On the CSO side, participation goes with empowerment and their suggestions being included in the final budget.

At budget implementation stage the 2012 Open Budget Survey gave the Aquino government a mixed score, “to say the least,” said PCIJ’s Karol Ilagan. Only in one out of three documents to be shared to the public while the budget was being implemented did the Aquino government score high. It was in producing the ‘in-year reports.’ This document, said Ilagan, should show revenues collected, expenditures made and debt incurred.

The Aquino government got a zero for failing to publicize a Mid-Year Review and a Year-End Report.

According to the Survey, a Mid-Year review should summarize the actual budget data for the first six months of the year (revenues, spending, debt), reassess the economic assumptions upon which the budget was initially drafted, and adjust the budget figures for the remaining six months accordingly. The Year-End Report, meanwhile, should show the situation of the government’s accounts at the end of the budget year and include an evaluation of the progress made toward achieving the policy goals spelled out in the Enacted Budget.

The Aquino government did “a bit better” during the audit phase, said the 2012 Survey, because “it had covered the annual expenditures that need to be published in an audit report two years after the end of a fiscal year.”

The PCIJ report on Open Budget Survey 2012 underscored the critical role of legislatures and supreme audit institutions in planning and overseeing the implementation of national budgets. In making the budget process more open, governments should not only ensure its transparency, it should also ensure the existence of a strong legislature and a supreme audit institution, IBP said.

Under Aquino, the strength of Philippine legislature and supreme audit institution (COA) remains to be only “moderate” according to the global budget survey. Plus, the survey noted that “improvement is needed on the aspect of conducting a formal debate on the overall budget policy prior to the tabling of the budget proposal and consultation with members of Congress to determine budget priorities, among others.”

The survey praised the Department of Budget and Management’s (DBM) pilot consultations with six national government agencies and encouragement of other state agencies and corporations to initiate consultations with civil society organizations. But it noted also that these efforts still have a long way to go, beginning with the DBM expanding the number of agencies covered and looped into the budget preparation process.

Also, the 2012 Survey said that as evidenced by actual experiences of civil society organizations, public participation in discussion and enactment of the budget remains limited.