MANILA – It’s an old tale one can narrate over and over again – with varying settings and back story – but one would still get the same enchanting result.

The Philippine Educational Theater Association closes its 45th season with a comedy-musical “D Wonder Twins of Boac,” a modern adaptation of William Shakespeare’s “Twelfth night.” The play is directed by Maribel Legarda

The story begins with twins Viola (Cris Villonco) and Bastian (Chrome Cosio) from the small town of Boac in Marinduque. They spent their childhood joining singing and dancing contests in their province, which, in real life, is a reality for many Filipinos.

Their journey to Manila, however, was met with misfortune when Viola lost Bastian in a shipwreck. Believing her brother to be dead, Viola pursued their dreams until she, disguised as man named Cesar, was hired as the Friday boy of Doc Orsino (Lex Marcos), owner of a big film studio Campanilla Pictures.

There have been several adaptations of Twelfth Night that was produced both in theater and in film, among the most recent was the American film “She’s the Man,” (2006) where the character Viola was struggling to prove herself as a soccer player, disguised as her brother, to get into the school team. 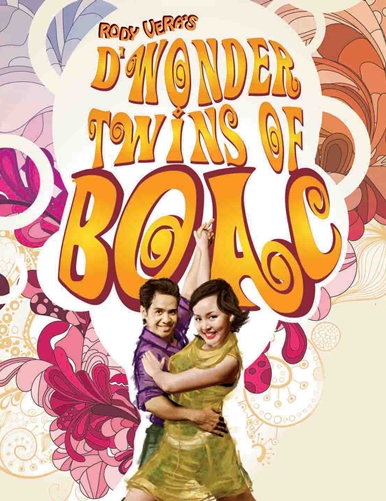 As expected of PETA, its long tradition of theater did not fail its audience as it adapted the classic literature to the Philippine context. Its playwright Rody Vera said there was no other way to depict Shakespeare’s duke and the rest of the cast than to set it during the decline of the Golden Years of the Philippine Cinema, an aftermath of a period in the country’s history where movie producers were treated as royalty and their stars as minions.

“What a delightful setting where actors can overact, passion can overflow, and comic twists and turns can aptly punctuate a fantasy world all its own. And yet, the underlying rumblings of a movie industry that is beginning to fall through slowly, is just the background of this entire sensational, spectacular dazzle,” Vera said.

Though the setting was in the 1960s, the critique of the quality of films that were being produced at that time still applies today. Many believe or claim that there is now a reawakening of Philippine cinema as more and more independent films are being produced.

Malvolio (Gino Ramirez, Lao Rodriguez), an award-winning director who fancies Olivia, described the then emerging musical and comedy films as “bakya” (literally wooden sandals), meaning unsophisticated. These films, he said, treat their audience as if they were dumb.

Is his description not applicable to the themes of the films we have today? Overused themes of films today are about a man who has to choose between his wife and his mistress, love developing between a man and his girl Friday, a mother looking for her lost child, a cruel stepmother oppressing a step or adopted daughter who would later turn out to be a scion of a rich family, and the list goes on.

Round stage and live music

The story is filled with varying levels of conflicts between and among the characters and the characters, too, against themselves. But Vera managed to weave the story smoothly; everything just fell into place.

Their punchlines, though some were not exactly that new, were delivered with timing and at the most unexpected circumstances. It filled the theater with laughter.

The play, however, was not able to establish well how and when Viola started to fall for Orsino, at least when one is not familiar with the original Shakespeare piece.

The music was well written. And to everyone’s amazement, they played the piano live.

The production design by Lex Marcos, who also played Orsino, made use of arena theater or theater-in-the-round with the audience sitting around the stage. The director Maribel Legarda said during the press preview that it was a challenge to the staff and crew on how they would adjust to the round stage. This is only the second time in Peta’s history that it performed in an arena theater. And, bravo, they did.

Theater-in-the-round, of course, has its disadvantages because there were scenes where the characters had to turn their backs on the audience. But the good thing, too, is that you can sit anywhere in the theater house and still get a good view of the play.

The play ends in a surprising twist. If you want a clue, here is an excerpt from the song “Ang Pelikula’y Isang Panaginip” (A film is a dream), which they sang in the end: “Ang pelikula’y isang panaginip na di tayo magigising. Ang akala nating happy ending ay may nakatago palang dillim.”