Read also: After SMI-Xstrata, it is now Philex’s turn to receive go-signal to mining operations

MANILA – Last year’s failure of Philex’s tailings dam deposited heavy metal copper in the Balog-Agno junction, the confluence of Balog and Agno River which flow from Padcal, Benguet to Pangasinan. This was reported two weeks ago in a forum at the University of the Philippines in Quezon City by environmental and science groups that conducted a fact-finding mission on the Padcal mining disaster late last year. Its results prompted the groups to warn the Aquino government that reopening the Philex mines now would be disastrous to communities and environment.

This is despite the company’s payment of a P1.034-billion ($25.2 million) fine to MGB last Feb 18 for the waste spill in August last year. It is facing another fine – amounting to millions of pesos – that continues to increase until the Balog and Agno rivers, which it had polluted, have been rehabilitated.

Two weeks ago, after the company paid MGB a fine, two unions of Philex mining workers affiliated with government-backed Trade Union Congress of the Philippines made an appeal to the government to allow Philex to resume mining operations. They said they fear for their jobs. Since August 1 when the dam failure was first reported, Philex’s operation was suspended, dashing the mining company’s previously announced expectations of higher production and profits from the mining site in the second half of 2012. 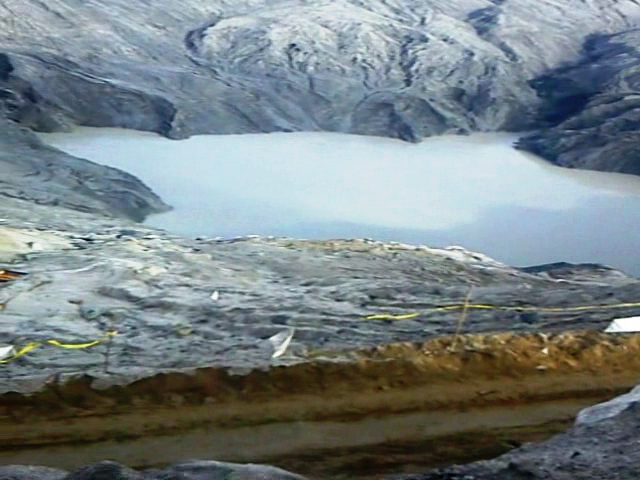 This sinkhole in Philex’s tailings pond is partly the source of spillage of an estimated 20MT of mine wastes into the Balog river. Even the mining company’s bulldozer, 2 load-haul-dump equipment (LHD), and large industrial container boxes reportedly fell from here to the river, Sept 2012. (bulatlat.com)

As the company reportedly tried to plug the hole in its dam by trial and error, it was revealed that, as per public documents, the said Philex’s tailings dam had reached the end of its lifespan early last year. While Philex had projected more mining years at the site, it had not set out to build a new tailings dam to replace the old dam or TP3.

A tailings pond or dam is a necessary part of mining, Virgilio Aniceto, an Ibaloi engineer and one of the leaders of Cordillera Peoples Alliance, said in a forum two weeks ago. He pointed out that despite Philex’s claims of responsible mining, it holds a record of dam failures and unleashing mine spill in all three tailings dam it had used since it started operations.

Unleashed poison in the environment

Green groups and the Cordillera Peoples Alliance expressed opposition to Philex’s drive to resume mining operations especially when it has not yet begun to rehabilitate the compromised dam, contrary to Philex’s claims and the seeming agreement to it of Mines and Geoscience Board director Leo Jasareno.

“A company with a history of disastrous mining like Philex deserves to be punished for its negligence, and not to get a second chance at operation and mindless exploitation,” said Clemente Bautista, national coordinator of Kalikasan Peoples’ Network for the Environment.

Laboratory analysis of sediments collected by independent fact-finding groups in the mine spill impact areas pegged the highest concentration of copper in the area at 450 ppm.

“At that level, the amount of copper in the junction is four to five times greater than the threshold limit for copper in sediments based on international standards,” said Center for Environmental Concerns Senior Rsearcher Rog Amon. The maximum tolerable copper concentration in sediments in mining country Australia is set at 86 ppm.

The sediments reportedly underwent elemental heavy metal analysis performed by UP Los Baños BIOTECH and the Philippine Institute for Pure and Applied Chemistry.

Before Philex’s minespill, Balog River was deemed a Class A water body where plants and animals thrive. “But during our visit (two months ago, December 2012), the fact-finding team observed that the river was biologically dead as indicated by the absence of macroinvertebrates. This change can be attributed to the massive deposition of mine tailings and high concentration of copper in the soil,” said Feny Cosico, environmental expert from AGHAM (Advocates of Science and Technology for the People).

The groups’ findings contradict the laboratory findings presented by Philex and its commissioned scientists and corporations that heavy metals in their mine tailings and Balog River is below the standard limit of the Department of Environment and Natural Resources.

High level of copper is toxic to plants, insects and invertebrates, according to the US Environmental Protection Agency. To humans, toxic copper levels can cause diarrhea, stomach cramps and nausea and at its worst, it can damage lungs, liver, kidney and pancreas.

“Ingestion of heavy metals by aquatic organisms may increase the toxicity of the metals due to biomagnification along the food chain,” Amon said. She surmised that the downstream communities’ complaints of digestive illnesses immediately after the mine spill could be signs of contamination.

All these toxic wastes are now in the river system from Balog to Agno to San Roque Dam and the irrigation canals it supplies water to. It disperses and dissolves as it flowed further downriver and spread to farm lands.

With the government giving Philex the go-signal to resume mining, citing the “excuse” that it needs to fill up again its tailings pond 3, green groups warned of more catastrophes.

“TP3 should never be used again. Instead, a thorough rehabilitation and eventual decommissioning should be implemented immediately,” said Aniceto who is also a nominee of Katribu Indigenous Peoples Partylist.

In a statement today, Aniceto warned that any attempt to use TP3 poses greater danger to life, property and the environment. He excoriated MGB’s approval for Philex to resume operations as “ill-advised and baseless.” He accused the MGB of not fully understanding the cause of dam failure that had brought all these toxic dangers to the environment.