Progressive groups are protesting against high prices, high rates of utilities and mishandling of Sabah issue.

MANILA – While President Benigno “Noynoy” Aquino is busy campaigning for his Team Pnoy, the impact of his programs and policies are driving the people especially the organized sectors to set up protest centers all over the country.

“There’s a defeaning silence on oil price hikes by Team Pnoy,” Steve Ranjo, secretary-general of Pagkakaisa ng mga Tsuper at Opereytor Nationwide (PISTON), said at a press conference in Quezon City this Wednesday March 13. Oil overpricing is just one of the many things that aggravates the people’s misery, Ranjo said, and they blame the Oil Deregulation Law for causing this.

In his campaign for the presidency in 2010, Aquino had promised to look into the matter, but last year’s review committee which he formed only after many peoples’ protests, ended up absolving and defending the oil companies. The committee had relied only on the books and information the oil companies voluntarily shared to them. 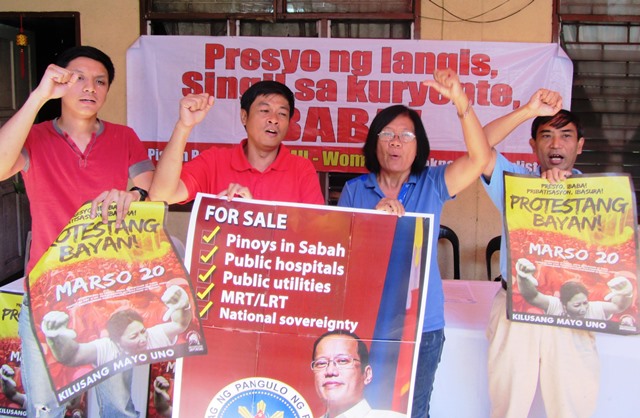 Against rising prices, privatization and the Aquino government’s handling of the Moro people’s Sabah claim, Ranjo of Piston and leaders of other sectoral organizations announced a “peoples’ protest” to be held on March 20. The groups blame the rising prices on government policies such as liberalization and deregulation.

With Piston were Elmer “Bong” Labog of the Kilusang Mayo Uno (KMU), Bea Arellano of the Kalipunan ng Damayang Mahihirap, Vencer Crisostomo of Anakbayan, and Joms Salvador of Gabriela. They called on the public to participate in various protest centers on March 20.

The sectoral leaders invited the public to drop by at the following areas in Metro Manila where they will set up protest centers: Baclaran transport depot, Monumento, Cubao, Litex-Commonwealth, Airport Road, Puregold Sta. Mesa, Zapote in Alabang.

On March 20, Piston will drive a caravan from Quezon City Hall to Department of Energy; Anakpawis will picket in front of the Department of Health, Gabriela will hold pickets against water rate hikes, KMU against increases in rates of utilities like electricity. Labog of KMU said protest centers will also be established in some cities outside of Metro Manila.

Ranjo belittled the recent rollbacks in oil prices. He compared it to a badly orchestrated cha-cha, saying the oil companies may give an illusion of stepping back, but at the end of the music, oil prices have moved further forward than backward.

Piston called on the country’s drivers and operators to join the protest centers to be set up by various sectoral organizations on March 20. “There remains the problem of oil overpricing, and the deafening silence of the energy department on high oil prices,” Ranjo said.

Piston is calling for a “big-time rollback.” They said the oil companies operating in the Philippines continue to be at the top ranks of biggest corporations, as a result of its immensely profitable operations. According to Ranjo, it is unbelievable that oil prices are increasing worldwide when economies are sluggish in Europe, US and China.

“The overpricing being undertaken by the oil cartel is obvious. It should be implementing a big-time rollback amidst the weakening of the dollar but instead it has hiked prices since the start of the year,” Ranjo said.

He warned that if the people will not take action, we would likely be burdened further with more price hikes including this coming Holy Week. The oil companies notoriously raised prices especially during holidays. He also maintained the claim disclosed by multisectoral group Bayan last year, that diesel is overpriced in the Philippines by almost P10 (US$0.25). The amount may only be the tip of the iceberg, he said, as they had analyzed only the data available for researchers. “This huge overpricing is maintained (by oil companies) despite rollbacks,” Ranjo said.

Prices hikes brought by oil price increases threaten to get worse as a result of continuous privatization being pushed by the Aquino government, the group Piston said in a statement. They cited as one of the biggest examples the case of Petron, now controlled by tycoon and former Marcos crony Danding Cojuangco.

“Where will the poor go the moment public hospitals are privatized?” Arellano of urban poor group Kadamay asked.

She added that administrations including Aquino’s have paved the way for the privatization of hospitals by reducing its budget every year.

The same is true for public schools and universities. Crisostomo of Anakbayan said that the PUP students would hold a strike in protest of an impending tuition fee hike. PUP is the biggest state university in the Philippines in terms of students enrolled.

Aside from PUP, some 400 other schools are set to raise tuition fees this coming June, Crisostomo announced.

Meanwhile, “The big capitalists in the power and water sectors are having a grand time while Filipinos suffer from increasing rates. The government should junk the Electric Power Industry Reform Act and revoke its contracts with the Independent Power Producers,” Joms Salvador, secretary-general of Gabriela said.

Because of these actions of the Aquino government, the sectoral leaders branded Pres. Noynoy Aquino a “bentador ng bayan (traitor to the people).” They unveiled a poster of the chief executive with the following words: “For Sale: Pinoys in Sabah, Public hospitals, Public utilities, MRT/LRT, National sovereignty.”

The leaders said that increases in the prices of petroleum products and the rates of public utilities are untenable in the face of stunted wages and incomes.

Aquino to blame for carnage in Sabah

“The Aquino government should stop blaming the media about the bad news that’s happening in Sabah. It has no one to blame but itself for authorizing the massacre of Filipinos in the disputed territory,” Vencer Crisostomo, chairperson of Anakbayan, said.

Asked to comment on CHR Etta Rosales’s seeming gag order for the media on the issue of Filipinos’ maltreatment in Sabah, Crisostomo replied that Rosales’ response is in line with Aquino’s sell-out to Malaysia.

“There is ongoing carnage in Sabah because of Aquino government’s inaction, and now the Philippine CHR itself is defending Malaysia’s action. The CHR spoke in favor of Malaysia,” Crisostomo said. He urged the public to take Aquino to task for his government is “fueling the trouble in Malaysia. “The Aquino government itself is encouraging Malaysian troops to kill Filipinos, since Aquino himself calls for their surrender,” Labog said.“Perhaps Etta Rosales would like to set up office in Malaysia instead of here,” Crosostomo added.

The progressive leaders praised the media’s diligent efforts in uncovering the plight of Filipinos in Sabah, including the likely violation of human rights and international humanitarian laws.

“If the president wants to be the campaign manager of Team PNoy while Filipinos are dying in Sabah, then he should take a leave of absence or resign from his post. This is the height of irresponsibility, campaigning to death while Filipinos are being mowed down,” Labog said.