“How could we have peace when our government does not care for the poor?” – urban poor leader

MANILA – Estrellita Bagasbas, a leader of an urban poor group, yearns for peace.

“If we are losing our homes and livelihood and our children do not go to school, how can we say that we have peace?” Bagasbas, a resident of sitio San Roque, Bagong Pag-asa, Quezon City, told a gathering of church workers and peace advocates, March 19.

A native of North Cotabato, Bagasbas said she went to Manila to find a better life. “Here in the city, I did not expect that I would still be confronted with guns. Every night, security guards of Ayala (corporation) roam our community,” Bagasbas said.

Sitio San Roque is a part of the Quezon City Central Business District project, a joint venture between the National Housing Authority and Ayala Land. The 250-hectare project aims to develop the area into a prime property at the center of Quezon City through constructing commercial and residential units. It, however, currently serves as home to some 20,000 urban poor families.

Bagasbas and the other residents oppose the demolition of their homes without proper relocation. 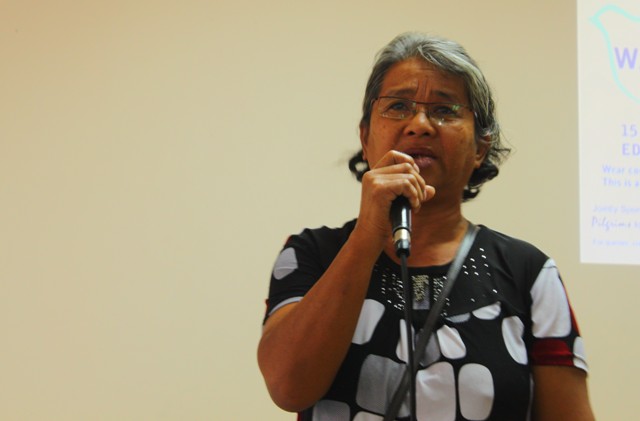 “How could we have peace when our government does not care for the poor?” the woman leader asked.

Bagasbas said that during one of their protests last year, some of the young residents were beaten up and arrested by the police. “What’s worse is that the four women who accompanied them were also detained. They were made to pay for bail to get out of jail.”

“In this country, justice is only for the rich. The poor get no justice,” she added.

An Aeta from Subic, Zambales, also shared his sentiments in a forum organized by the Pilgrims for Peace and Sulong CARHRIHL titled “Tales from the Ground: Compelling Reasons to Resume Peace Talks.”

“We only wanted the government to respect our ancestral domain,” the Aeta who requested that his name be withheld for security reasons, said.

The man said that he was tagged by soldiers as a member of the New People’s Army (NPA) because he was vocal about their rights as indigenous peoples.

The NPA is the armed wing of the Communist Party of the Philippines.

Two women narrated how they and their loved ones became victims of human rights violations.

Marilou Mariano, a resident of Doña Remedios Trinidad, Bulacan, said her husband was mistaken as a member of the NPA and was killed. Her son is also facing charges.

According to the account of Sulong CARHRIHL, the incident took place on July 19, 2011. The Mariano family was sleeping when they were awakened by gunfire. It turned out that the shots were directed at their hut. The victims shouted that they are civilians. When the gunfire stopped, Marilou’s husband was already dead. Her son, Norman, sustained three gunshot wounds but survived the shooting. The soldiers brought Norman to the V. Luna Medical Center, the hospital of the Armed Forces of the Philippines.

On February 13, Norman was surprised to receive a letter from the Prosecutor’s Office of Malolos, Bulacan. The resolution states that Norman and his father were NPA guerrillas. He is being charged with illegal possession of firearms. A separate charge of frustrated murder has also been filed against him before the Municipal Trial Court of Doña Remedios Trinidad.

“I am here to plead for your help,” Marilou said.

Marites Chioco, common-law wife of Rolly Panesa, recalled how authorities arrested them without any warrant shortly before midnight of October 5, 2012. 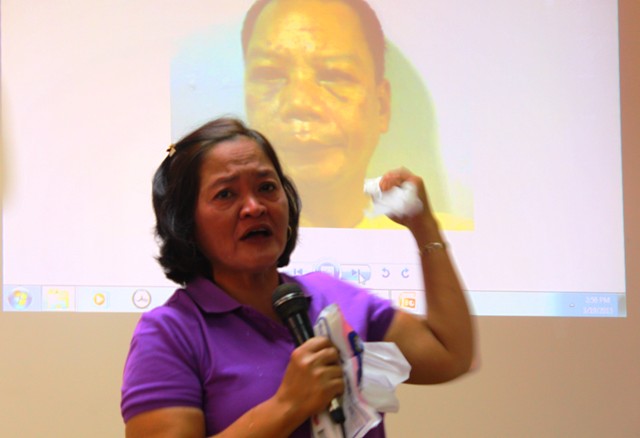 Marites Chioco shows the photograph of Rolly Panesa who was tortured by state security forces.(Photo by Ronalyn V. Olea / bulatlat.com)

Chioco said her husband is an ordinary security guard and denied allegations by the military that Rolly Panesa is Benjamin Mendoza, a high-ranking officer of the CPP. There is a P5.6 million ($136.5 thousand) reward for the capture of Benjamin Mendoza.

“He remains languishing in jail up to this very hour,” Chioco said. “My husband is not an NPA. He is an ordinary security guard.”

According to Sulong CARHRIHL, the GPH initially confirmed that they would send a representative but called a day before to say that they would no longer attend the forum.

Malayao said the NDFP remains open to both the formal track and the special track in the peace negotiations.

The regular track, the formal peace negotiations, has been at standstill since February 2011 and the special track has been stalled after the meeting of both panels in Amsterdam last February.

Malayao denied accusations that the NDFP is imposing preconditions when it insists that detained consultants must be released. Malayao said it is the GPH that is not complying with the Oslo agreement that states the GPH shall work for the expeditious release of most, if not all, detained NDFP consultants. Malayao added that the demand for the release of the consultants is also in compliance with the Joint Agreement on Safety and Immunity Guarantees (Jasig). 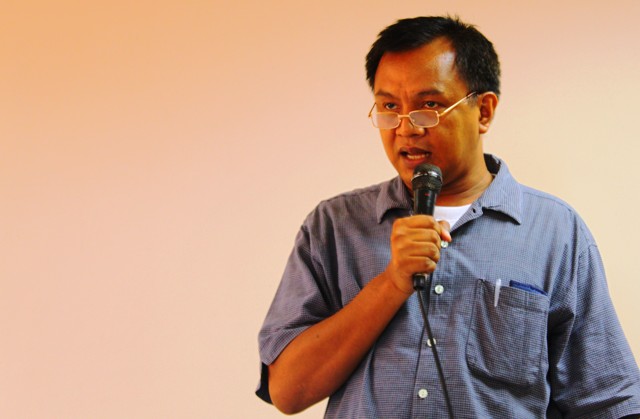 Randy Malayao, a consultant of the NDFP, explains the obstacles in the resumption of peace talks .(Photo by Ronalyn V. Olea / bulatlat.com)

“We have a big problem when the chief political adviser of the President in the peace talks does not respect the framework agreement in the peace talks, the Hague Joint Declaration,” Malayao said, referring to Office of Presidential Adviser on the Peace Process (OPAPP) Secretary Teresita Deles.

Malayao explained that Deles called the agreement signed in 1992 as “a document of perpetual divisiveness.” “In order to push through with the talks, we need to abide by the previously signed agreements,” Malayao said.

Reacting to the stories of ordinary folk, Malayao said the NDFP is determined to pursue a just and lasting peace through various means.

In a petition, the Pilgrims for Peace and Sulong CARHRIHL called on both parties to resume the formal talks, comply with agreements and end impunity.

Next in the substantive agenda of the formal talks are social and economic reforms.

“Is peace for the poor, too?” Bagasbas asked.