“Dear Kristel, we are thankful that you reminded every iskolar that education is a right and must be accessible to all.”

MANILA – University of the Philippines student Kristel Tejada was laid to rest on Saturday, March 23 at the Manila North Cemetery.

“Maybe you got tired of talking and having no one to listen to you. So you chose this kind of silence so that you would be the voice of the youth,” her mother Blesilda, 38, said after the mass at the Immaculate Concepcion Parish in Tondo, Manila.

16-year-old Kristel committed suicide on March 15, allegedly when the university made her file a forced leave of absence. As a policy, the University of the Philippines – Manila does not allow delayed payment of students’ tuition.

Due to mounting pressure, both from the UP community and the public, university officials recently lifted the said policy.

“Our struggle is not a personal fight. This is a fight of many people who have a children, nephews, nieces or siblings who see education as the only way out of poverty.” Christopher, Kristel’s father, said, adding that education is a right and everyone should get it. 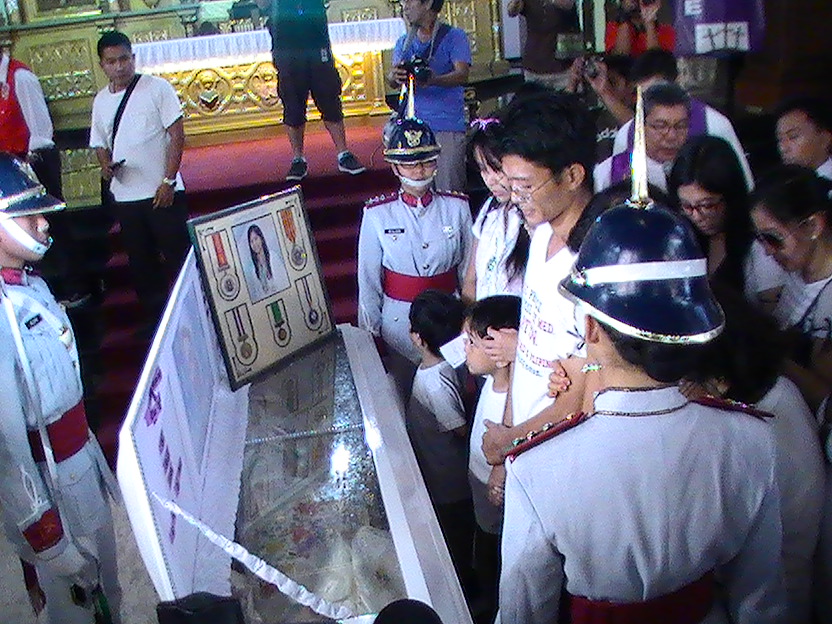 Among those who attended the funeral to pay their last respects to Kristel are professors and students of the University of the Philippines.

On March 21, the remains of Kristel was also brought to the University of the Philippines – Manila. According to students, this was part of their initiative, along with their professors, to pay their respects for Kristel. Officials of UP Manila allowed it but cancelled classes in the College of Arts and Sciences for the public viewing.

Students like 18-year-old Charleen, an Industrial Pharmacy student at UP Manila paid their last respects to Kristel even if she has never met her before.

“I found out about her death via a text message, disseminated by our student council in our college. I was very surprised. I never thought that it could come to this,” she told Bulatlat.com, “There has been a lot of discussions about the FLOA (Forced Leave of Absence). I heard it then. But I never thought it would trigger a student to claim her own life,” Charleen said.

Like Kristel, Charleen said there was also a time when she almost filed for a leave of absence. But good thing, she added, that they still managed to find money to pay for her tuition, which is about $575 per semester.

Charleen, after passing her requirements to the Socialized Tuition and Financial Assistance Program, was assessed to be part of Bracket B, which means that her annual family income is close to nearly $25,000. She said it is not true because her father, in fact, has no permanent job as a carpenter. But she was told shortly after her enrollment that they factored in the fact that two of her older sisters are already working.

“This policy (FLOA) is not good. It is an anti-student policy,” Charleen said, “A student should not be assessed based on their financial capabilities, especially when it is a poor but deserving student.”

“Maybe this is also their way of calming the students because they are really angry,” Charleen said.

Inside the auditorium of the College of Arts and Sciences, a soft music is being played while photos of Kristel, along with her friends from her Behavioral Science class, were being flashed on the screen. Only five students at a time were allowed to pay their last respects. But they waited patiently in line.

Among those in line was Pol, a third year Behavioral Science student from the university. Like Charleen, she did not get the chance to meet Kristel in person. But she and her friends still came.

“We wanted to pay our last respects to her. We are also sorry in behalf of the UP community because we have failed her,” Pol said, “It had to reach to this point for us to wake up and see how rotten this system is.”

Pol added, “We were not able to fight for them, especially on their right to education.”

18-year-old KC, Kristel’s classmate, for her part, said Tejada was very quiet. “She talked in class only when she raised her hand and knew the right answer,” she told Bulatlat.com, “But outside class I hear her laugh with her friends.”

“Though we are not that close, she would always mess up my hair every time she would see me in the restroom,” she added.

All along, KC said she thought Kristel was doing okay, despite the fact that she needed to take a forced leave of absence at the university. “I regret that I did not get the opportunity to know more about her.”

She added UP Manila officials allowed her public viewing here to perhaps show their concern.

For Pol, however, she does not feel that the UP administration has shown its sincerity to the Tejada family. “It hurts that they could not even say the simple word ‘sorry.’”

Outside the auditorium, students wrote their short letters and notes to Kristel on a white, plain tarpaulin.

“Dear Kristel, we are thankful that you reminded every iskolar that education is a right and must be accessible to all.”

Students expressed their gratitude for the sacrifice that Krystel has done for them. Others vowed that they would continue Kristel’s fight.

“Kristel, you will always be remembered. The sacrifice that you made will never be forgotten. We will make sure that you will not die in vain,” a student wrote. 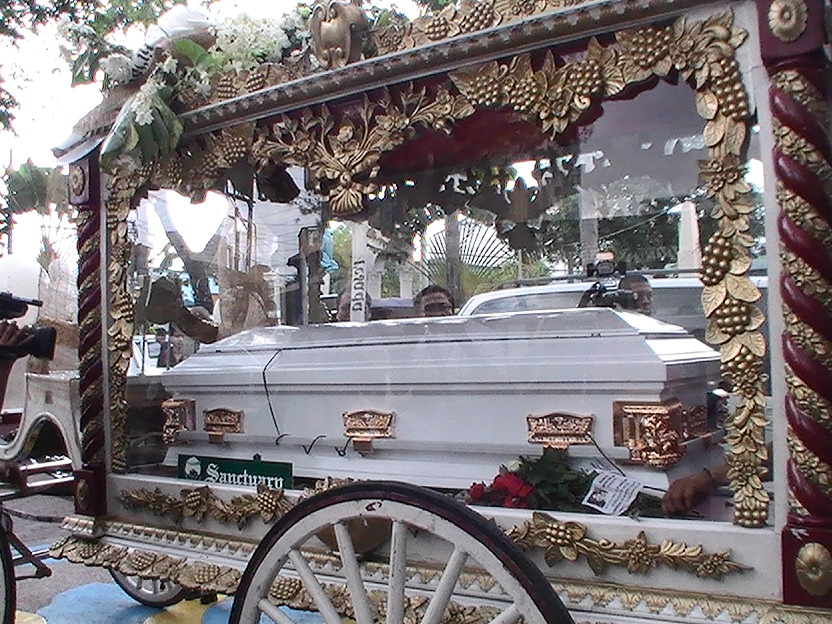 “Kristel, thank you for everything. I’m sorry that I wasn’t able to do my share. We’ll miss you. I know you’re happy.”

“Kristel, I’m sorry I failed you,” a message from a Behavioral Science student read.

Another student who signed by the name of John T. said, “Kristel, I personally would continue the fight for a better tomorrow. For this country.”

Fr. Anton Pascual, executive director of Caritas Manila, for his part, said Kristel’s death is a tragedy and a scandal in a country, which some people claim is “developing.”

“It is a shock and a shame that it happened in a Christian country,” Pascual, who led Kristel’s funeral mass told the media. He called on the church and most especially the government to act on it.

Caritas Manila will allocate some of its funds to the “Caritas Manila Educational Emergency Funds in memory of Kristel Tejada” for students from state universities and colleges who are facing situations like what Kristel had. Pascual said this is outside the regular and full scholarship they offer to students.

Christopher said that with the elections at hand, it is high time for voters to ask whoever will win if they will provide for free access to education and health services.

In a press conference last March 21, Christopher said that while he yearns for reforms in the University of the Philippines, he asked, “How long is it going to take before these reforms would be implemented?”

He asked for a dialogue with UP president Alfredo Pascual. “It will be a talk between two fathers,” he said.

Christopher urged UP officials to form a panel that would decide on possible reforms for the University of the Philippines. “The laws that would be crafted out of this should not be just for the good of the majority but for everyone.”

He said that it would be difficult to start their life again without Kristel but they are hopeful that the support they are receiving will give them the strength to do it.

Christopher said, “I don’t want this to happen to anybody again.”