What is the gov’t doing about the stranded OFWs in Saudi Arabia? – migrants group

“Repatriation of the stranded OFWs, especially the sick, old women and those who have children is within the purview of the state’s responsibility as mandated in the amended Migrants Workers Act of 2010 or Republic Act 10022.” – Migrante International

MANILA – Victoria Aquino, 56, is worried when she heard about the crackdown on undocumented migrant workers in Saudi Arabia. Her son, Dominador and his three nephews, Danilo Natividad, Ariel delos Reyes and Rene Villanueva, are working there as drivers. Their employers did not provide them with a residency permit.

Some five years ago, an Arab employer recruited the four of them to work in a trucking company. Danilo, Ariel and Rene left for the job first on July 1, 2008. Three months later, on Oct. 26, Dominador also flew to Saudi Arabia.

Aquino said the first few months went well for the four of them. That was until she was told that their employer lost a lot of money gambling. The trucking company where the four were working was eventually sold.

“They were sent to work with his employer’s brother instead. They worked as taxi drivers,” Aquino told Bulatlat.com, “It was difficult because they did not have regular income.”

Though Aquino does not know exactly how much her son is earning, she said she knows that it is meager and barely enough to keep him alive in Saudi. “He hardly sends us money here. There are times he would not send us money for seven months. I now pay for his child’s schooling.”

Aquino is subletting her house in Mapulang Lupa in Valenzuela City, where she earns a small but decent income to support her needs and her 58-year-old husband Dominador Sr., who, in Oct. 2012, suffered a stroke.

“Ariel told me they want to go home. But they can’t because they do not have money to pay for their Iqama (residency permit). Their employer said they won’t get one because he does not have money,” she said.

Camp out outside the consulate

Aside from the four of them, hundreds of undocumented overseas Filipino workers in Saudi Arabia are also asking the Philippine embassy for immediate repatriation. The crackdown on undocumented migrant workers is a result of the implementation of the Saudization policy. 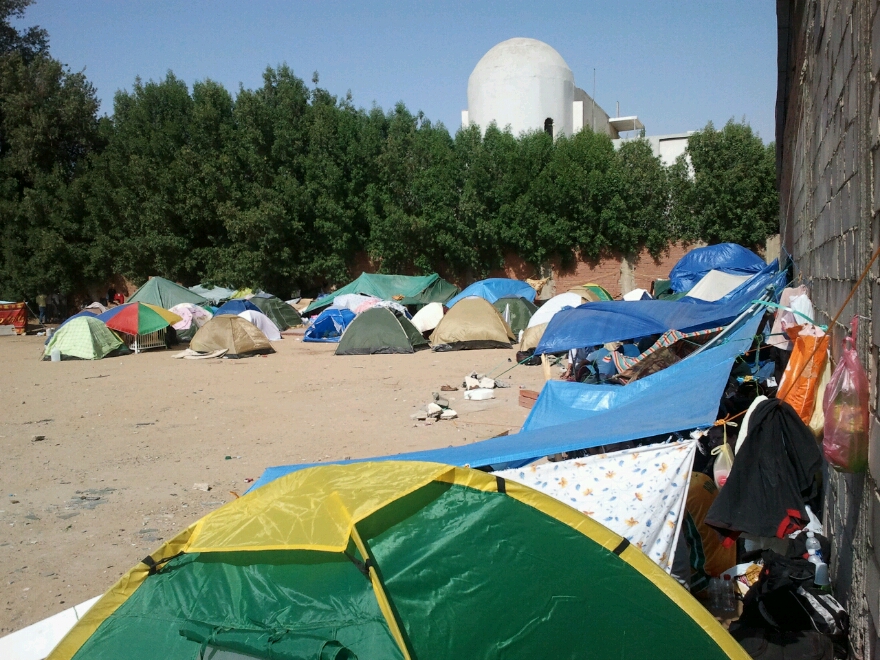 John Leonard Monterona, regional coordinator of the Migrante – Middle East, said in a statement that the continuous flocking of migrant workers outside the Philippine consulate in Jeddah could “lead to a full blown humanitarian crisis if not properly attended to.”

“We raise serious concerns about the stranded OFWs’ daily sustenance and their health especially the children and the old and sickly given the high weather temperature reaching 38 to 42 degrees Celsius or even higher,” Monterona said.

On April 10, some 80 Filipinos went outside the Philippine consulate in Jeddah and built their makeshift tents there. A few days later, Monterona said, their numbers have increased to about 1,450 and “still counting.”

“Repatriation of the stranded OFWs, especially the sick, old women and those who have children is within the purview of the state’s responsibility as mandated in the amended Migrants Workers Act of 2010 or Republic Act 10022,” Monterona said, adding that the law requires the government to allocate repatriation funds amounting to $2.5 million.

Monterona said there is now a “considerable number of stranded OFWs who want to go home and be reunited with their families.”

“We note that since the last quarter of 2012, there were already 7,000 stranded (Filipinos) who wanted to avail of the Philippine government’s repatriation program. This does not yet include those who have applied at the Philippine embassy and POLO-OWWA offices in Riyadh and Al-Khobar, respectively,” Monterona added.

If President Benigno C. Aquino III wanted to extend help and solidarity to stranded OFWs, Monterona said, he could “allocate funds from his social funds and other sources.” But that is, he added, if “his government has the political will to act on the mass repatriation of the stranded and undocumented OFWs in Saudi Arabia.” 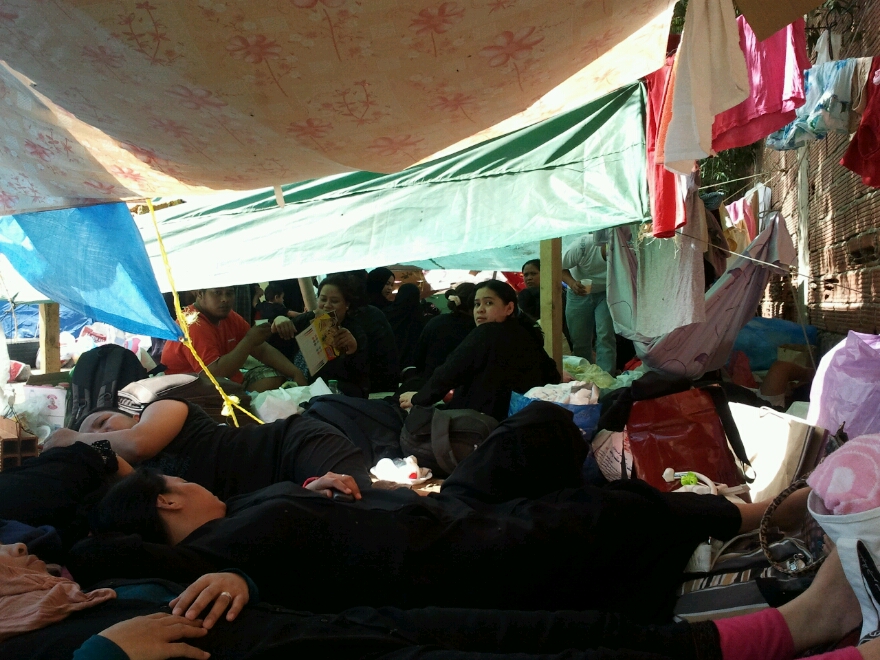 He also urged the Aquino administration to help its people “lobby to the host government for the granting of general amnesty and fast track the repatriation of all undocumented OFWs.”

In the immediate, Monterona said, the government should provide the stranded OFWs with a safe shelter to live in. He cited as example what the previous Macapagal-Arroyo administration did: it leased a shelter inside the Al-Mina Haj seaport terminal for some 200 undocumented OFWs who lived under the Khandera Bridge in Jeddah.

“It would be a good idea to rent again the Al Mina Hajj terminal as a temporary shelter for the stranded OFWs just like before to lessen their burden and put them on a safer and convenient place,” Monterona said.

The government, however, needs to pay 1.4 million Saudi riyals or $375,000 in unpaid rent before the current stranded OFWs could move in.

Monterona said he already sent a letter to Foreign Affairs Undersecretary for Administration Rafael Seguis and to OWWA administrator Carmelita Dimzon to look into the unpaid dues for the shelter but “did not receive a favorable answer from the two officials.”

He also sent a letter to Vice President Jejomar Binay as early as August 2012 but did not receive any reply.

“Allowing the stranded Filipinos to stay under the heat of the sun and doing nothing to relocate them to a safer and more comfortable shelter is tantamount to criminal neglect,” Monterona said, adding that it would be a disservice to “its own people who have been hailed by the government itself as its modern heroes.”

While waiting for the government to act on this potential crisis situation, migrant rights groups based in Saudi Arabia are doing their share to help their fellow Filipinos. 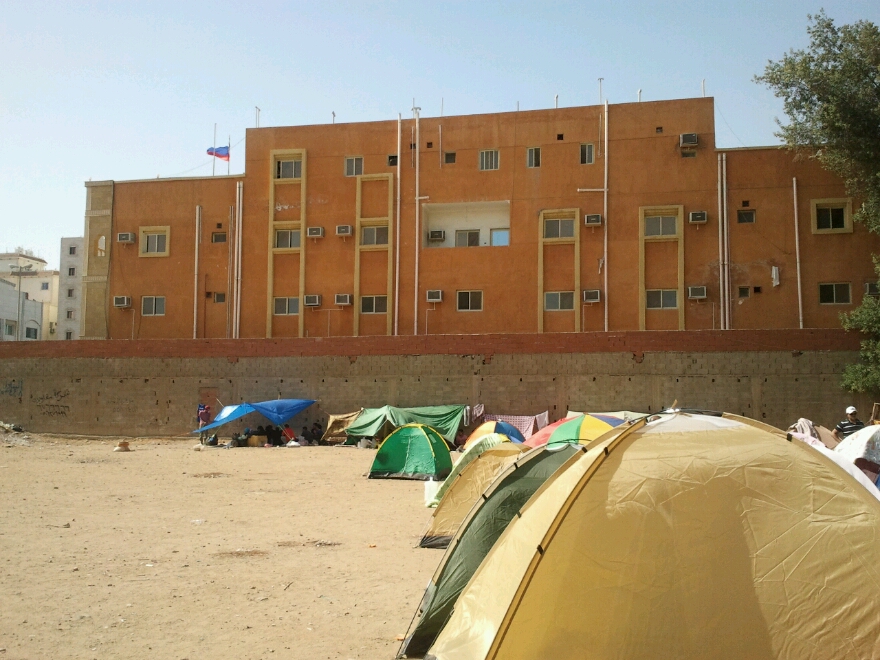 “We are worried about their conditions, especially the health of the children and women considering the high temperature this summertime, and where to get their daily sustenance,” Bobby Fajarito, vice chairperson of Migrante-Jeddah chapter and spokesman of Jeddah Filipino Society (JFS), said.

Gabriela-Jeddah chairperson Beng Medina said their group is seeking donations for food, water, and other needs of the stranded Filipinos, especially the children. “We will also conduct a medical mission to monitor the health conditions of the women and children,” she said.

Aquino, for her part, said life would have to go on. “But my thoughts are always with my loved ones who are far from home. I hope they will remain safe all the time.”