BAGUIO CITY — Various groups labeled as anti-mining for being very vocal critics of large- scale mining operations declared that they are not against mining per se but have long been demanding a mining industry that benefits the Filipino people.

“We are not against mining. We recognize the need for mining. But it’s different if foreigners are the ones utilizing our mining resources…” Sister Nilda Balaba head of the Social Action Center-Justice and Peace of the Diocese of Marbel in South Cotabato, said in a forum at the University of the Philippines (UP) Baguio.

Balaba shared the plight of the B’laan, the indigenous people adversely affected by the operations of SMI-Xstrata in the south. She described how Philippine Army troopers stared a house and killed a pregnant woman and her sons just because they the family was opposed to mining. She was referring to Juvy Capion and her sons.

“Where is the military’s rules of engagement? They [victims] are humans, not animals. They have dignity. They have rights. Who will protect them?” Balaba said.

The nun also pointed out that military detachments are all over the area and that soldiers have encamped even in schools, disrupting classes and endangering school children. She further disclosed that the soldiers deployed in the area are not there to protect the indigenous peoples but to facilitate the operations of the foreign mining company.

Balaba said that the government should give primacy to the common good and the interest of the Filipino people over foreign capitalists.

Judy A. Pasimio of SOS Yamang Bayan (SOS-YB) said that SMI-Xstrata was able to operate the Tampakan Gold-Copper project, said to be the largest gold mine in Southeast Asia affecting Sarangani, Davao del Sur, Sultan Kudarat and Cotabato. She added that the said project is the size of 17,000 basketball courts with open pit mines as deep as a 160-storey building spread over watershed and prime agricultural lands in the said provinces.

Pasimio also mentioned how the mine operations of Climax Arimco Mining Company, now Oceana Gold Philippines Inc., has devastated Didipio, Kasibu, Nueva Vizcaya. She said Didipio used to be among the fruit bowls and the rice granary of the province but now, mine constructions have covered rice fields.

Pasimio also described how the Provincial Water Regulatory Board (PWRB) of Ifugao ruled in favor of Oceana granting the company water rights that resulted to conflict among the affected villages. She added that the PWRB cited provisions of the Mining Act, particularly the Financial and Technical Assistance Agreement (FTAA) provisions that include water rights.

Pasimio also pointed out that there are “hidden costs” of mining. She said mining operations and applications breed division and disunity in communities that used to value close family ties and community harmony. She said that due to the adverse impacts of mining to the environment, women who used to be food growers are now left with limited choices of odd jobs that include washing clothes and cooking for mine workers and cleaning for mine offices.

More disturbingly, she said that due to the influx of migrant men mine workers, entertainment like videoke houses and brothels has become a lucrative business resulting to increase in prostitution.

Santos Mero, deputy secretary general of the Cordillera Peoples Alliance (CPA) reiterated the over 100 years of hosting large mining companies, Benguet has remained to be among the poorest provinces in the country. He added that until today, agriculture remains to be the leading source of income for the province.

Mero also pointed out that over 100 years of large scale mining operations resulted to dead rivers, deforestation and continuing mining disasters, the latest being the breach in Philex Mining Corporation’s tailings pond 3 (TP3). He also mentioned the decades-long operation of the Lepanto Consolidated Mining Company resulted to the continuing sinking in Mankayan and the death of the Abra River due to mine wastes.

The CPA leader also pointed out that mining applications and operations have violated the Cordillera indigenous peoples’s right over their ancestral lands and resources. He explained that large-scale mining contradicts tribal communities’ resource management traditions that take into consideration the environment and the right of the future generations. He said that the indigenous peoples view the land as their source of life and that they are just care takers for the future generations. He added that nearly 70 percent of the total land area of the Cordillera is covered with mining applications.

Makabayan senatorial bet Teddy Casiño, on the other hand, underscored the unjust sharing of profit from mining, and the present mining laws that allow very minimal share for host communities and even for the government. 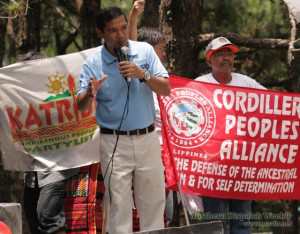 Mining is an issue that has ecological, social justice, industrial, moral and generational dimensions that should not be ignored by the current and future government officials,” Makabayan senatorial bet Teddy Casiño says.(Photo by Noel Godinez/ nordis.net)

He explained that the Department of Environment and Natural Resources (DENR even issued an administrative order interpreting the provisions of the Mining Act that the government’s share from the mineral resources will be limited to the usual taxes, duties and fees.

“If we want mining to be truly beneficial to the country and the Filipino people on the long term, we need to do away with the current unconstitutional mining policy that leaves us with miniscule revenue, permanently destroyed environments and no agricultural and industrial advancement,” he said.

Casiño, however, said that money is not the only benefit from mining. “We want a mining industry that benefits the community and the country. When we speak of benefits, we do not just refer to monetary revenue. The real value of our mineral resources is being a catalyst for economic growth and national development,” he said.

He reiterated the need to craft a new mining law that will reorient the present mining industry. “Mining should be part of a National Industrialization Policy that will ensure the sustainable utilization of our resources while taking care to minimize the industry’s ecological and socio-economic impacts,” he said.

The progressive lawmaker, who authored the People’s Mining Bill in the current Congress, believes that the government should prioritize biodiversity protection and the wise utilization of natural resources as a prerequisite in an all-round national development roadmap.

“The 1987 Constitution clearly mandates that the State must receive its just share in the utilization of our mineral resources aside from taxes and duties normally paid by taxpayers. Mining is an issue that has ecological, social justice, industrial, moral and generational dimensions that should not be ignored by the current and future government officials. The Filipino people should have fullest participation on decision-making and control over our natural resources in all our laws,” Casiño said.

Peoples organizations, environmentalists and religious groups rallied behind Casiño and called on the magistrates to junk Philippine Mining Act of 1995 as they urged the passage of an alternative mining law that is pro-people and pro-environment. Northern Dispatch