“Aquino cannot dismiss torture victims as isolated cases, and not a government policy, because torture is resorted to all over the country as a component of its Oplan Bayanihan.” – Karapatan

MANILA – Marking the International Day in Support of Victims of Torture, relatives of victims and members of human rights groups marched toward Chino Roces (formerly Mendiola) bridge to denounce the use of torture by state agents.

Marie Hilao-Enriquez, chairwoman of human rights alliance Karapatan, said that despite the fact that the Philippine government signed the United Nations Convention against Torture and Other Cruel, Inhuman or Degrading Treatment or Punishment, “state security forces resort to torture and apply it to their victims, inside and outside prison.”

The United Nations General Assembly proclaimed June 26 as the International Day in Support of Victims of Torture in a resolution dated on December 12, 1997.

Karapatan documented 76 incidents of torture in the three years of the Aquino administration. In 2009, the Philippine government enacted Republic Act 9745 or the Anti-Torture Act but Karapatan said the law “has not prevented the government from using torture to extract information from detainees or abducted persons.”

“The government violates its own laws,” Hilao-Enriquez said.

Panesa is a security guard arrested by state agents along Aurora blvd. in Quezon City on October 5, 2012. Authorities claim that Panesa is Benjamin Mendoza, a top communist leader.

Speaking during the rally, Josie said in Filipino: “My brother is an ordinary security guard. He is not a communist leader.”

Her voice breaking, Josie related that her brother was tortured. Medical examination showed that Panesa had bruises and scratches and there was a blood clot in his right ear. 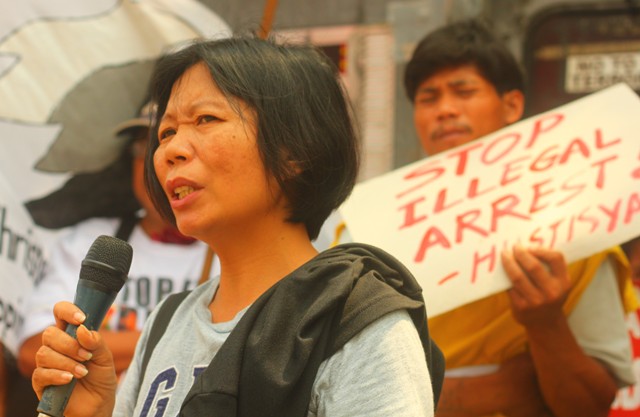 Josie Ranesa calls for the release of her brother Rolly Panesa in a rally marking the International Day in Support of Victims of Torture.(Photo by Ronalyn V. Olea / bulatlat.com)

“Where is the righteous path that Noynoy Aquino is saying?” Josie asked. “I call on our government to release my brother.” Panesa is detained at the Camp Bagong Diwa in Taguig City.

Mothers of missing University of the Philippines (UP) students Karen Empeño and Sherlyn Cadapan expressed frustration over the failure of the government to arrest retired Gen. Jovito Palparan Jr, the main suspect in the abduction of the two students.

Today is also the seventh year since Karen, Sherlyn and farmer Manuel Merino were forcibly taken by alleged soldiers.

In a court hearing, an eyewitness testified that Karen and Sherlyn were tortured, even sexually abused by soldiers.

“We have gone to the courts and followed your slow process and still we have not found our daughters,” Erlinda Cadapan, mother of Sherlyn, said. “Noynoy Aquino, I hope you will hear my voice. Surface Sherlyn Cadapan, Karen Empeño and Manuel Merino! Arrest Palparan!”

Palparan and three other military officials have been charged with kidnapping and serious illegal detention in relation to the disappearance of the two activists. Palparan and another suspect Master Sgt. Rizal Hilario remain at large despite a standing warrant of arrest. Two other suspects are in military custody.

According to Families of Desaparecidos for Justice, today is also the seventh year of the disappearance of National Democratic Front of the Philippines peace consultant Prudencio Calubid, his wife Celina Palma, a staff Ariel Beloy and his niece Gloria Soco. They were abducted at the boundary of Quezon Province and Camarines Norte on June 26, 2006 and have remained missing to this day.

“In all the cases of enforced disappearances, none of the perpetrators is ever punished or put to jail,” Lorena Santos, secretary general of Families of Desaparecidos for Justice said.

“The government cannot fool the people by simply dishing out pro-human rights hype in media. What is happening on the ground is humiliating the Aquino government. Aquino cannot dismiss torture victims as isolated cases, and not a government policy, because torture is resorted to all over the country as a component of its Oplan Bayanihan,” said Hilao-Enriquez.

“The next three years will be marked by continuing, if not worsening human rights violations as Noynoy Aquino, like his predecessors, resort to the continuing use of Oplan Bayanihan. The people must remain ever vigilant on the intensification of fascist attacks by this government just like the struggle the people waged against the fascist attacks of the former dictator Marcos,” she said.