You Are Here: Home → 2013 → July → 31 → Unionists from Asia and the Pacific share same stories of attacks on workers’ rights

MANILA – More than 50 unionists from Asia-Pacific countries and the USA met for a two-day conference in Manila last week to share experiences in wage and other union struggles. On the first day of their meeting, they noted similar findings: on paper, workers and employees are free to speak out and form associations, but in reality, to enjoy those rights they have to engage in fierce, nonstop struggle.

According to the International Labor Organization (ILO), “freedom of association”, along with freedom of expression and assembly, guarantees protection against discrimination, interference and harassment. All these are said to be fundamental rights, which are at the foundation of democracy.

Workers’ experiences in various countries showed though that this freedom of association is being limited, circumvented, defeated by various written and unwritten labor laws and policies. (See: Asia-Pacific workers wage struggles to turn ‘formal’ rights into reality) Such is the extent of efforts to limit this freedom that the international conference of union advocates were told “we have to be clear what we mean when we use the phrase ‘freedom of association,’ as Apo Leung of ITUC-Asia warned on the first day of their conference.


From Leung’s explanation, employers and governments have used ‘freedom of association’ to counter the formation of unions itself. In another way of viewing freedom of association, as initiated by managements and formed by governments, “workers have freedom NOT to join associations,” or NOT to have collective bargaining agreements, according to Leung. He stressed that workers DO like to have their own associations – and these are not the tripartite councils or grievance bodies or labor-management councils.

The conference “Resisting Repression, reclaiming rights” was held from Jul 16 to 17 at the University of the Philippines in Quezon City. Union activists were reminded that in fighting for workers rights, they are also performing the role of human rights defenders. Participants to the conference came from the United States, Hongkong, Bangladesh, Thailand, Indonesia, India, Cambodia, Australia, Myanmar, South Korea and the Philippines.

Assault on freedom of association in ‘middlemen economies,’ flexibilization

In the Philippines, labor activists have heard similar threats. Some big factories have in fact relocated to China, or from Manila to special economic zones in other Philippine regions. Amid all these relocation, workers’ wages and job conditions deteriorate along with the disappearance or contraction of their unions.

Anna Leah Escresa, executive director of Manila-based Ecumenical institute for Labor Education and Research (EILER) and one of the conveners of the international workers’ conference, blamed the constriction of freedom of association on neoliberal policies. Hiring and firing becomes easier with the relaxation or deregulation of labor laws and other policies. Relocating capital and jobs also became easier with trade liberalization.

Neoliberal policies largely call for policies pushing for liberalization, deregulation and privatization. These are supposed to address the recurring economic crises plaguing capitalism. But since these were adopted by various economies, price hikes, diminished wages and contracting social security became more prevalent.

“Workers’ freedom of association has been comprehensively and systematically violated under neoliberal policies,” Escresa said. She recalled that back in the 60s, unions were regarded as part of growth, and unions were given concessions. But under neoliberal policies since the 80s, she said, unions began to be systematically attacked in Europe and the US. In fact, with the help of neoliberal policies, leading corporations have increasingly cut jobs in their home countries and brought these to other less developed countries where wages are cheaper. Other relatively advanced economies like Australia also did that.

Today, Asian economies are recording high economic growth rates, registering growth far above rates recorded in the EU or the US, Panimbang of AMRC noted. Asian contribution to global manufacturing output has been growing, too, he said, citing figures that showed how the Asian contribution increased from more than a quarter to nearly a third of global manufacturing output from 1992 to 2008. But for all these, the Asian labor activist described Asian economies as mere ‘middlemen’. He reasoned that the top, powerful multinational corporations are still based in these countries.

Panimbang said that by exporting capital and then subcontracting jobs to developing countries, employers have limited the workers’ freedom of expression.

Nowadays, big brands could trumpet their advocacy for “corporate social responsibility.” But tales of sweatshop conditions, child labor and union-busting hound their manufacturing plants overseas.
When a fire killed hundreds of workers of some US-branded garments in Bangladesh recently, American Brian Campbell of International Labor Rights Forum (ILRF) shared how their lobbying efforts for labor rights in the US were responded to by American corporations. As they pushed for fire regulations, he said, employers countered by saying “there’s no such thing as international regulations on labor,” nor arbitration. 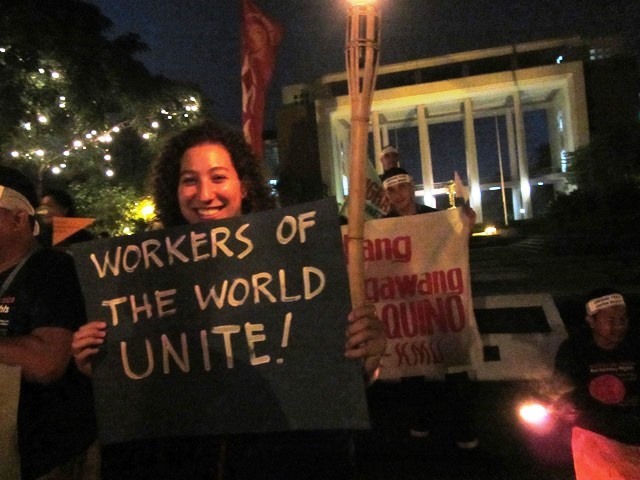 In their conference, the labor and human rights defenders agreed that they have to continue forming unions and associations, despite the hardships, because these are necessary. “We came here to have an international workshop on resisting oppression. We hope to share experiences in Asia, in the US and many other countries present here,” Panimbang of AMRC said. He added that their coming here is also their way of telling Filipino workers that “we know that you’re among the many suppressed, we are here to support you, fight for your rights, your freedom to organize. We’re blaming your government for being harsh on your people.”