MANILA – Urban poor residents who were relocated to Kasiglahan Village held a ‘rooftop protest’ to commemorate the first year since the monsoon rains brought heavy flooding in their area.

“The urban poor is criticizing the government’s inaction to ensure that the flooding that brought havoc to their community, where thousands of families were affected and has placed their lives in danger, would never happen again,” Kadamay, an urban poor group, said in a statement.

Last year, the monsoon rains heavily flooded Kasiglahan Village in Montalban, where most urban poor residents whose homes were demolished in Metro Manila were transferred, supposedly to keep them out of danger areas. About 2,000 families were reportedly affected by the flood, where they lost most of their belongings.

Photos of residents sitting on the roof of their houses went viral in social networking sites.

The experience of the residents, according to Kadamay, should serve as warning to urban poor families living along waterways who are about to be displaced. According to Aquino, in his recent state of the nation address, removing their homes would supposedly resolve the perennial flooding in Metro Manila. There are about 20,000 families who would be displaced to off-city relocation sites such as in Kasiglahan Village.

“Instead of saving the urban poor from danger, it seems that the government wants to bring us to far-flung relocation areas where there is hardly social services available and no access to livelihood,” Carlito Badion, secretary general of Kadamay, said.

Not fit for housing

Kadamay said Kasiglahan Village 1 was constructed in 2000, under then president Joseph Estrada to serve as a mass housing project for urban poor families residing along Ilog Pasig.

But as early as 2004, the group said, they have received reports from the Urban Poverty Morphology Series that Kasiglahan Village is not suitable for a socialized housing project, citing its vulnerability to flooding and earthquake. 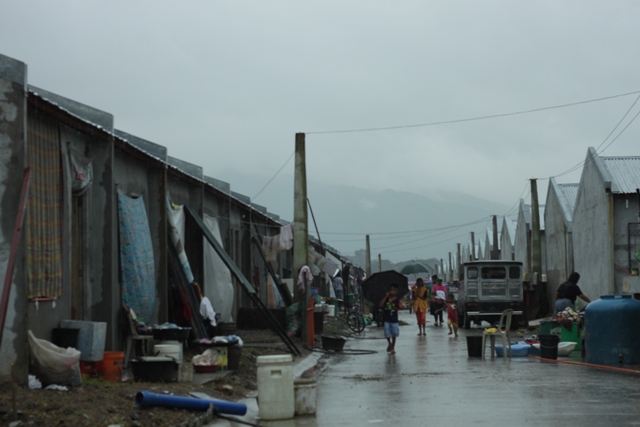 The said study is in a database that contains socio-economic profiles, environmental conditions, and other planning and development information for resettlement sites. The researchers also did a suitability analysis on the resettlement area considering its vulnerability to flooding and earthquake.

“Through this study, it was determined that the two resettlement sites (Kasiglahan Village and Sub-Urban Housing Project) are located in an area that is highly vulnerable to floods and earthquakes. It was also determined that the area is not suitable for socialized housing because of its distance from industrial and commercial areas, which are important sources of livelihood,” the study read.

The flooding that was brought about by the monsoon rain last year was not a first, according to Kadamay. Heavy flooding also occurred in the area on August 1998, November 2004 and during Typhoon Ondoy in September 2009.   “This is not surprising because the relocation area used to be a floodplain, where water from the mountain ranges of Sierra Madre would flow,” Badion said.

The UPM 2004 study also noted that the floodplain was merely reclaimed to give way to the reclamation area. A river, the study added, was also diverted.   On top of these, Badion said, the poor drainage system and the denudation of the mountains due to quarrying and logging activities have greatly contributed to the flooding in Kasiglahan Village.

Kadamay said they already had a dialogue with local government officials of Rodriguez, Rizal on the rehabilitation and dredging of the river. But residents were told to talk to the Department of Public Works and Highways and the National Housing Authority.

Warning to other families

Interior Secretary Mar Roxas, who has recently been appointed by President Aquino to spearhead the demolition of homes of estero-dwellers to relocation sites, presented before the media the supposed peaceful relocation of families in San Juan City to a resettlement site in the province of Bulacan.

But Badion said these families are bound to return to the metropolis in a few months.   “The government is wasting its resources in constructing off-city relocation sites because it has already been proven that this would not provide a solution to the housing problems in Metro Manila,” Badion said.

Kadamay, citing the report of the Department of Interior and Local Government Technical Working Group back in March 15, 2011, said the government’s own data revealed that off-city relocation program is not “pro-poor.” The late Interior secretary Jessie Robredo suggested, instead, the construction of in-city relocation sites for urban poor families.