The Social Security System is profitable. President Aquino even offered a “salute” to it for having increased its membership, its collections and its profitability. Why, workers ask, should it increase workers’ contributions?

MANILA – If the Social Security System (SSS) administration and President Benigno “Noynoy” Aquino III would have their way and the SSS contributions are to be increased this year by 0.6 percent to become 11 percent, the contribution for each employee earning P10,000 (US$229) a month would rise by P60 to P1,100 (US$25.15). Employers had reportedly refused to agree to the increase. They softened only when the SSS floated the idea of a 50-50 sharing scheme in the proposed premium increase, as Susie Bugante, SSS vice president for corporate affairs and communications, said in a radio interview last month. 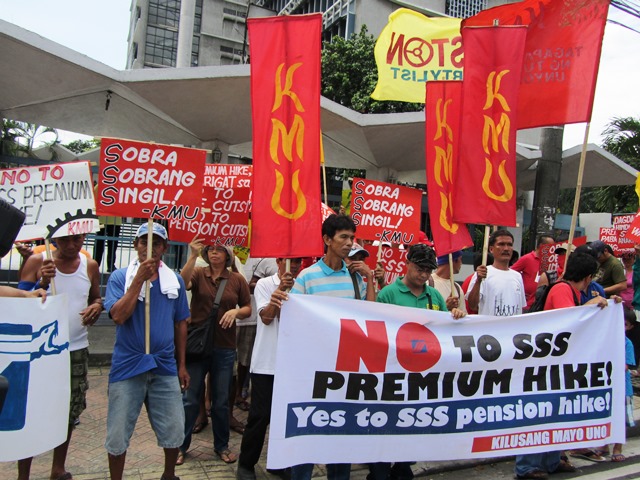 KMU rejected the SSS plan to increase premium contributions, as well as its plan to change the employer-employee sharing scheme from the current 70-30 to 50-50. The labor center has been critical of the planned increase from the start, questioning its basis as well as the way the government has been handling what they call as “workers’ funds.”

“This premium hike is an added burden to workers and is not necessary to improve the benefits offered by the SSS or to extend the life of the agency’s funds. It may simply go to the pockets of big capitalists in the form of start-up capital for projects under the government’s Public-Private Partnership program,” said Jerome Adonis, campaign officer of KMU.

SSS had indeed announced as early as Feb 2011 that it would invest in the PPP program.

The labor center also finds it “disgusting” that the Aquino government and the SSS management are pushing for the revision of the employer-employee sharing scheme. “This government never tires in finding ways to make life difficult for workers and make life heaven for capitalists,” Adonis said. 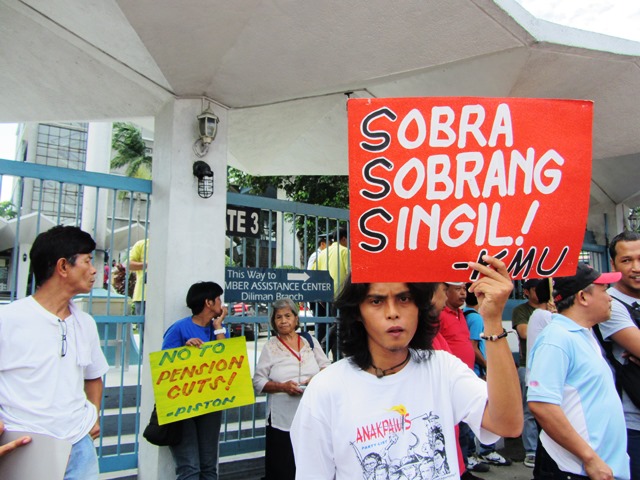 The KMU said Aquino is a liar when he said in one of his pre-Labor Day speeches and in his SONA that the SSS has an estimated P1.1 trillion (US$ 25.15 B) unfunded liability. KMU said it was denied by SSS officials who explained that the amount is merely a projection of the agency’s unfunded liability after many decades.

SSS quizzed on how it invests funds

At present, SSS has more funds than it is spending. Consistent with its usual annual trend, it reports an increase in contributions in the first quarter of this year, collecting from private sector employees P25.58 billion (US$ 585 M), higher by 7.8 percent year-on-year, from P23.74 billion (US$ 542.8M).

SSS is profitable. President Aquino even offered a “salute” to it for having increased its membership, its collections and its profitability.

But that profitability is apparently not due to SSS’ adeptness at investing. The SSS has some P350-billion (US$ 8B plus) investible fund as estimated in the equities market. The fund is growing every year as more contributions flow in compared to its disbursements.

Edgar Solilapsi, SSS executive vice president of investment sector, said in a press report last month that they could use 30 percent of SSS investible funds to buy stocks. But in the first quarter of 2013, for example, the SSS reported a nine percent drop in investment income, reporting only P10.5 billion (US$ 240.1m), amid record highs in the same period at the Philippine Stock Exchange (PSE) index.


The KMU had been asking the SSS administration for reports on its investments and how it has been using “the workers’ money.” Last month, during a picket in front of the SSS headquarters in East Ave., Quezon City, KMU vice-president Sammy Malunes expressed exasperation at the SSS for not answering their questions about its investments during their dialogue.

Aside from investing on stocks, SSS has known stakes in leading telecom Philippine Long Distance Telephone Co and more than 20 percent stake in top gold and copper miner Philex Mining Corp. In 2011, SSS CEO De Quiros reportedly announced on separate occasions plans for SSS to invest in energy, in San Miguel Corporation when it becomes listed, and in PPP projects.

Despite the highs reported by the local bourses and the unprecedented highs in profits of PSE-listed corporations in the first three years of the Aquino presidency, SSS investment income is just a third or a fourth of the pension fund’s total revenues. A big portion comes from membership contributions, Solilapsi said.

SSS disbursements are often smaller than what flowed in every year. For the first quarter of 2013, the total benefit disbursements even decreased by 2.1 percent at P21.19 billion, down from P21.64 billion in 2012.

During their protest in front of the SSS, workers charged that they should have been enjoying improved benefits – if the SSS administration has been handling the workers’ funds well and truly for the workers – rather than piling on them additional burdens like hikes in contribution amid the wage freeze and wage cut.

In rejecting the Aquino government’s proposed hike in contributions and change in the employer-employee sharing to increase the workers’ share, Jerome Adonis, campaign officer of KMU, said “That would be most anti-worker and pro-capitalist and would amount to a greater plunder of workers’ hard-earned wages.”

After holding a program highlighted by the burning of SSS logo, the protesters wrapped up their program promising “to intensify protests until these anti-worker plans are junked.” In other parts of the country, they said, other workers held simultaneous pickets in front of SSS offices in their areas.