A few meters away from Malacañang, speakers from various sectors held the Aquino administration accountable for “the damage it has caused on the rights, lives and livelihood of the Filipino people, especially the poor majority.”

Inside Malacañang, Communications Secretary Herminio “Sonny” Coloma Jr. said during the regular press briefing, “We join the whole world in celebrating the ‘International Day of Human Rights,’ which comes a day after the observance of the ‘International Anti-Corruption Day.’”

“We are one with the Filipino people in the belief that the most basic human right is the right to a better life,” he added.

For human rights advocates and activists, however, there is no cause for celebration. 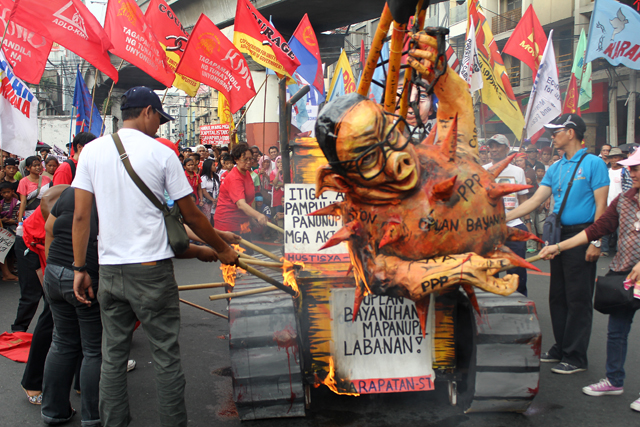 A few meters away from Malacañang, speakers from various sectors held the Aquino administration accountable for “the damage it has caused on the rights, lives and livelihood of the Filipino people, especially the poor majority.”

Human rights alliance Karapatan held Aquino accountable for 152 victims of extrajudicial killings, 18 enforced disappearances, 168 frustrated killings, 358 illegal arrests and detentions on trumped up charges, torture and other gross human rights violations committed during his term. “His counterinsurgency policy, Oplan Bayanihan, and his promotion of the pervading culture of impunity sanctions all these,” Cristina Palabay, secretary general of Karapatan, said.

Under Aquino, at least one extrajudicial killing is perpetrated by state security forces per week, according to Karapatan.

For the first ten days of the month alone, the group documented at least three cases of extrajudicial killing.

On Dec. 6, Pedro Tinga, 54, a farmer and a leader of the Mansaka tribe, was killed allegedly by elements of the 71st Infantry Battalion-Philippine Army at Malamodao village, Maco, Compostela Valley. Initial reports from Karapatan-Southern Mindanao said Tinga was on his way to a farm he planted with corn when soldiers fired at him. He instantly died of gunshot wounds. Tinga was one of the survivors of typhoon Pablo in 2012, and was among the beneficiaries of Indug Kautawan, an organization of the survivors of typhoon Pablo.

On Dec. 5, at around 7 a.m., Aldrin Briones Rabulan, 44, was found dead at purok 2, Tomagoktok village, Del Gallego, Camarines Sur. Soldiers belonging to the Army’s 49th Infantry Battalion were still in the scene when a village guard saw Rabulan’s body, lying face down and with gunshot wounds on his back and feet.

Four hours before Rabulan’s body was found, some 20 members of the Bravo company of the Army’s 49th Infantry Battalion went to the house of village councilor Aquino P. Salcedo. The soldiers, led by 1Lt. Howard A. Ardedon, searched the house and found Rabulan. The soldiers immediately tied Rabulan’s hands and feet. Before leaving, the soldiers reprimanded Salcedo for “allowing a member of the New People’s Army (NPA) to stay at his house,” referring to Rabulan. 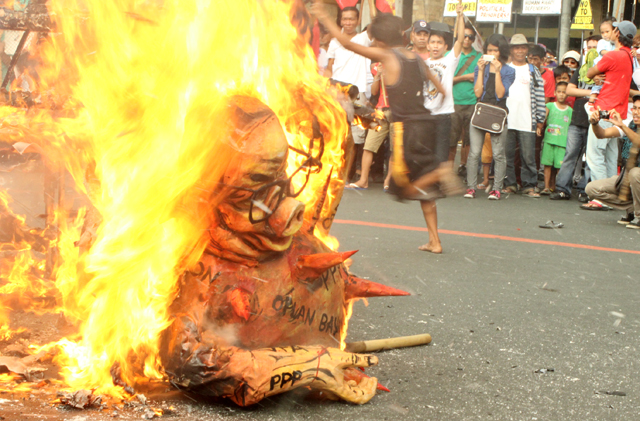 Earlier, on December 1, a member of the indigenous tribe Higaonon, Rolen Langala, 35, died of two gunshot wounds and stab wounds while his companion, Ruel Tagupa survived the attempt on his life. The two were on their way home after attending a town fiesta in Bagocboc village, Opol, Misamis Oriental, when village councilors Nestor Bahian, Eugene Papin, and Ramil Salvan accosted them. Tagupa saw how Bahian shot Langala, who was lying on the ground, already bleeding from stab wounds.

Langala was a member of Pangalasag, an indigenous people’s organization opposed to the operation of A. Brown, an agribusiness corporation that has a palm oil plantation in Opol.

Speakers during the program discussed 11 issues encompassing violations to economic, social and political rights. These include the implementation of Oplan Bayanihan that resulted to unabated human rights violations; continuing impunity and injustice; privatization and failure to provide the poor majority with basic services; eviction of urban poor dwellers and demolition; unemployment and unjust wages; massive landgrabbing; plunder of natural resources; corruption and pillage of the nation’s coffers through the pork barrel system; puppetry to the US dictates; and underhandedness in the conduct of peace negotiations.

“And what does this administration have to show for its human rights record? A Marcos compensation law that is awaiting all its beneficiaries to die first, a notorious fugitive general that is swaggering around for years, promotions of generals facing credible and serious charges of rights violations, legal fictions and tricks to bring trumped-up charges against activists, lucrative bounty lists that prey on the clueless, a plethora of task-force-this and task-force -that which have yet to deliver, a rights commission that is deafeningly silent if not conspicuously absent when needed most, a sprinkling of pro-human rights legislation that remain useless on the ground, legal remedies that are corrupted by those who should be liable, repressive laws and jurisprudence some dating back to the dictatorship, lack of priority to concretely expedite human rights complaints and give justice to the victims -exacerbated by institutional weaknesses of a tedious, cumbersome and widely-perceived corrupt and double-standard anti-poor justice system that not only grinds slow but grinds those who persist to seek redress-subservient arrangements for dubiously benevolent US troops mocking our sovereignty, a deceptive counterinsurgency program that wreaks havoc to civilians, the criminally inept and grossly negligent if not shameless partisan handling of killer disasters, ad nauseum,” Edre Olalia, NUPL secretary general, said.

Protesters burned two effigies of Aquino, one as Wrecking Ball and the other called “Pnoy the Destroyer.”

December 10 was declared as Human Rights Day in 1950 by the United Nations General Assembly.