You Are Here: Home → 2014 → February → 5 → Opposition to Meralco rate hike persists despite 13-cent slash in rates

Read also: Despite virtual monopoly, price-fixing, Meralco paints self as ‘not the bad guy’ in rate hike

MANILA – Despite efforts from the Energy Regulatory Commission (ERC) and the Manila Electric Company (Meralco) to seemingly address the growing public outcry against last December’s historic power rate hike, critics continued to press the Supreme Court to extend its temporary restraining order (TRO) on the said hike beyond Feb. 23.

“What we want to hear from our SC justices and from the government of President Benigno Aquino III is the total junking of the proposal of Meralco to increase its service cost,” Jinky Panganiban, spokesperson of #StrikeTheHike Network, said. 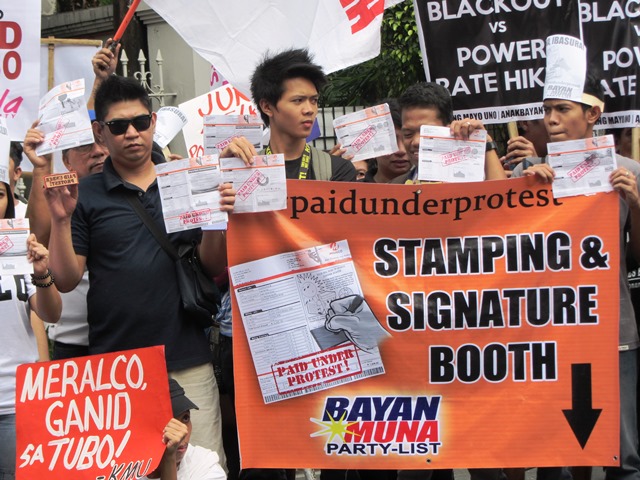 The 13-centavo power rate slash “means nothing beneficial and is in fact useless for electric consumers compared to the almost P10.00/kwH that will be added to the monthly bills if the High Court’s TRO is fully lifted,” the group #StrikeTheHike Network said in a statement. They held a series of protest actions the day before the scheduled oral argument, where Meralco took its turn to defend the historic rate hike.

Members of Gabriela Women’s Party joined protesters in front of the Supreme Court calling for the immediate repeal of the Electric Power Industry Reform Act of 2001 (Epira). Gabriela Women Rep. Luzviminda Ilagan said there is still no assurance of low electric charges in the near future as long as the Epira law remains.

The SC has issued a TRO on P4.15/kWh ($0.09) rate hike late last December, affecting the first tranche of an almost P10 ($0.22) rate hike to be charged by Meralco to consumers in staggered basis. The multisectoral alliance Bayan has since then added to its demands Meralco’s accounting of how much it collected from consumers despite the TRO.

Amid growing protests, the ERC on Dec. 20, 2013 forestalled another looming rate hike by Meralco. Despite the similarity in conditions where the ERC “hastily” allowed Meralco to pass the cost of increased generation charges in November and December to consumers, it issued this time an order “directing the deferment of the imposition of any further generation charge adjustment.” This was in response to Meralco’s advance warning that the generation charge for January might be higher than expected.

In an order issued last December 20, the ERC not only directed Meralco to maintain its generation rate at PhP7.37/kWh ($0.16) for the affected billing periods, it also said it will observe due process and will undertake a confirmation process “to safeguard that the generation charges that will be passed on to its consumers passes the test of prudence and reasonable economic cost incurred and that the Meralco procured its supply requirement in the least cost manner.”

This ERC order contrasted starkly with earlier order allowing Meralco to pass on the highest recorded generation charges, sans consideration of due process or other confirmation process. That glaring lack of due process seen in its hasty approval of historic rate hike was one of the reasons cited by the Makabayan bloc in their SC petition against Meralco’s historic rate hike. Their petition resulted in the TRO last December.

The Makabayan bloc’s petition is also seeking for a permanent injunction on the proposed Meralco rate hike, and for striking down as unconstitutional Sections 6 and 29 of the Epira law, which categorized power generation and supply as not being public utilities. They said this practically deregulates the power industry.

Bayan Muna Partylist Rep. Neri Colmenares reiterated what he calls as the public’s long-standing demand for the ERC to do its job as regulator and investigate the reasons for the power rate hikes. “Especially if the WESM [Wholesale Electricity Spot Market] is involved, all the more that the ERC should not have hastily approved the Meralco’s cited reasons for power rate hike, as ERC has the power to investigate WESM,” Colmenares said.

WESM was established with the passage of Epira purportedly to promote competition in the energy sector. It is a trading platform for electricity where power distributors buy supplies not covered by their bilateral contracts at market prices. In Meralco’s historic rate hike, as much as two-thirds is caused by the unprecedented spike in fuel it sourced via WESM, which the Makabayan bloc and other groups are questioning because of reports of price manipulation. Meralco reportedly bought fuel at the extraordinarily high price of P62, when the prevailing price was at P7 or P8, via its contracted supplier Therma Mobile.

Colmenares insisted that whatever reason is cited for power rate hike, allowing Meralco to automatically pass through costs is not good, and that it’s not true what the ERC has been saying that automatic pass through of costs is being implemented everywhere else.

The Bayan Muna representative said the SC can decide without trying the facts, that it can void the decision of the ERC that allowed Meralco’s historic hike because of three undisputed facts: (1) it is the largest generation charge in history, (2) there were the still-to-be-investigated simultaneous shutdown of power plants and (3) Meralco made one of its suppliers bid the highest.

In yesterday’s SC hearing, when Meralco’s counsel Victor Lazatin was asked why Meralco chose P62 and not P100 (for the bid of Therma Mobile whom it was contracting supplies from), he replied that it is because P62 is the bid cap, or the maximum price TMO could quote for its power supply.

The amount was unprecedented in Meralco’s generation charges, aside from being many times as high as the other bid prices at WESM at the time. Colmenares said it should have given the ERC reason to pause before approving the hike, and it should have called for an investigation first.

“The problem is when our gatekeeper is not doing the guarding but instead is the one attacking us,” Colmenares said in Filipino. When told that the ERC commissioners even have better retirement packages (because they receive it sooner and thus enjoy it longer) than the Supreme Court justices, Colmenares expressed deeper disappointment with the ERC. “They’re not fulfilling their roles and then we learn they’re receiving such benefits.”