Poor families developed terms to cope with the hunger such as memorize or imagine, practice, peking duck, altanghap and piso-piso.

MANILA –To earn enough to be able to eat three times a day is a daily struggle for the family of Corazon Tosio, 53. Although her eldest son David, 27, is helping out with the family’s expenses, she said, it is still difficult to get by every day. “The prices of basic commodities are very expensive. My son’s salary is not sufficient for our basic needs. My husband and I still have to find other means to earn,” she told Bulatlat.com.

She said food gets the biggest chunk of their budget, add to that the utilities such as electricity and water. “After that, there’s nothing left; what if one of us gets sick?” Tosio lamented. Tosio’s second child Dinalyn is in fourth year college in a state university the Polytechnic University of the Philippines, while her youngest Daniel stopped studying because they have no money.

Tosio and her husband are both jobless. They sell kangkong (water spinach) to augment the budget being given by her son David.

Tosio is one of the many women who are living in dire conditions.The Center for Women’s Resources (CWR) said the condition of women like Tosio’s contradicts the claim of inclusive growth by the administration of President Benigno S. Aquino III. In a study, CWR said more than one million women are unemployed. Those who have work receive a mere pittance since majority of them are in the informal sector or on a contract basis only. 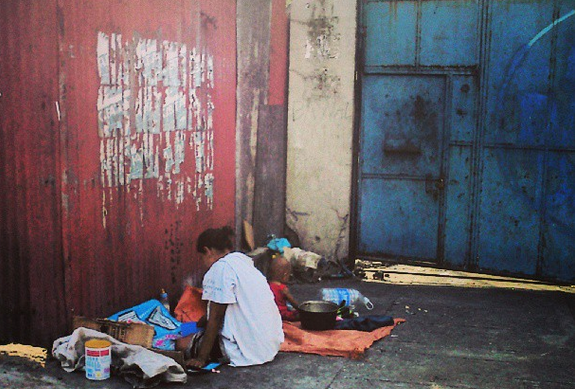 “If there is Peoples’ Surge [organization of victims of Typhoon Haiyan, locally named Yolanda], there is a price surge under the Aquino administration,” Cham Perez, research coordinator of CWR, said as she presented the Filipino women’s plight in their annual Ulat Lila forum held on Feb 19. Perez is referring to the incessant price hikes of oil, liquefied petroleum gas (LPG), food like rice, as well as the rate hikes of utilities like electricity and water.

“And the President does not do anything to put a stop to these increases,” she added.

CWR said impoverished families have lessened their food intake to cope. Poor families developed terms to cope with the hunger.

Practice – Families adjust their food intake, lessening it in anticipation of going without any in the succeeding days.

“Peking duck” –A new term for “pagpag” (literally dust off) referring to leftovers thrown in the garbage, which families pick up and recook to eat.

Piso-piso – A peso-worth of junk food like chicharon or fried pig skin serves as viand for the families.

According to Perez, adults develop hypertension because of too much salt in their diet. Poor families eat rice and soysauce, fish paste (bagoong), salt or soysauce with oil to make up for the lack in viand. “Their health is in peril because of such non-nutritious meal. Initial data gathered by CWR in Tondo, Manila indicated a significant number of women developing hypertension due to salt intake.”

“Not only are women and their families being deprived of a decent living, they are also being deprived of affordable and accessible health services,” said Perez. She added that government health centers that offer free health services have no sufficient supply of medicines. “In government hospitals, services such as laboratory tests are not free,” said Perez.

Getting poorer but not weaker

Women bear the brunt of their families’ suffering. Women are being devastated not only by the typhoon but also by the incessant price and rates hikes. As Tosio said, life is getting more difficult even for a small family like theirs.

But women do not take these things passively.Jojo Guan, executive director of the CWR, commended women, mostly members of Gabriela and Gabriela Women’s Party, for protesting against the anti-people policies of the government.

“One result of our collective action, together with the other sectors, is the issuance of a temporary restraining order against the proposed rate increase of Meralco,” said Neri Guerrero, chairwoman of Samahan ng mga Maralitang Kababaihang Nagkakaisa (Samakana).

“Women have actively participated in protest actions on many issues not only against the price hikes but also the pork barrel scam, against the presence of US troops in the country, the slow response of the government for the victims of typhoon Yolanda, violence against women, among others,” said Perez.

“Let us continue to resist and fight for our rights. This is not only for us but also for the next generations,” said Guerrero.