You Are Here: Home → 2014 → March → 4 → Government prosecutors to pursue case vs. union organizers

Randy Vegas and Raul Camposano are organizers of government employees under Courage and yet they are to be charged in court because of accusations that they participated in two ambuscades of the New People’s Army – one in Camarines Norte, in southern part of Luzon island and another in Ifugao at the far north – which allegedly occurred just days apart.

MANILA — Members of progressive organizations called on the Department of Justice to look into the recent decision of the Camarines Norte Provincial Prosecutor that found “probable cause” against Randy Vegas and Raul Camposano who were accused of participating in an armed encounter on April 29, 2012.

More known as Courage 2, Vegas and Camposano were charged with five counts of murder, one count of theft and one count of frustrated murder before the Regional Trial Court of Labo, Camarines Norte.

Both were forcibly arrested and were not presented any warrant of arrest on separate incidents in Metro Manila in December 2013. They were brought to Camarines Norte Provincial Jail where they have been detained since then.

Theresa Sesaldo, wife of Vegas, said the prosecutor gave unnecessary weight to the accounts of two witnesses who claimed to have seen the Courage 2 during the armed encounter. Gil Oresca, one of the two witnesses, claimed that he is a former member of the New People’s Army (NPA) who first met Vegas and Camposano back in 2001.

“They also gave merit to Pfc. Solomon’s statement against the two because he lost his comrade to the encounter. But that is biased,” Sesaldo said.

The witnesses provided the prosecutor their account in a clarificatory hearing on Feb. 7. Sesaldo described the witnesses as “heavily guarded” when they arrived at the fiscal’s office. 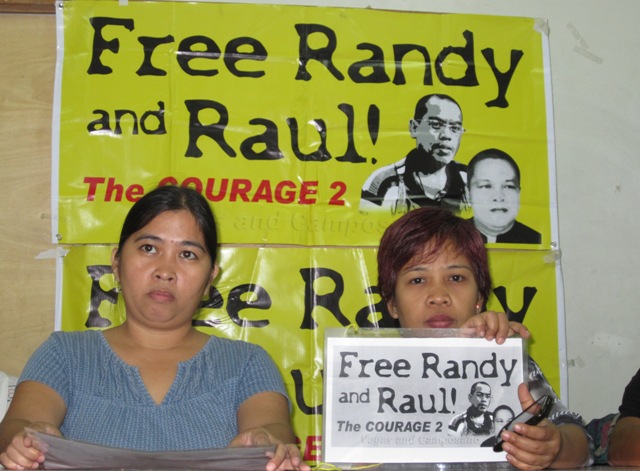 Ferdinand Gaite, president of Courage, a government employees union of which Vegas and Camposano are members, said the “prosecutor gave undue importance to the witness being a military man. It is precisely because the witness is a soldier that the fabricated case should have been set aside in the first place.”

Following the prosecutor’s findings, the Courage 2 would be arraigned for the charges filed against them. But their lawyer, Sesaldo said, has already filed a motion for reconsideration before the fiscal’s office.

Aside from the cases filed against them in Bicol, the two were also implicated in another armed encounter in Ifugao, which supposedly happened on April 25, 2012, four days before the Bicol attack. Vegas and Camposano are facing 11 counts of murder, theft and frustrated murder.

Trumped up charges vs activists

Aside from Vegas and Camposano, activists Amelita Gamara and Roy Velez were also among those implicated in the alleged armed encounter both in Bicol and in Ifugao.

Nikki Gamara of the Tambuli ng Mamayan, a network of families and friends of victims of political persecution, and daughter of Amelita Gamara said the case in Ifugao was earlier dismissed but was re-filed in December. The court then issued another warrant of arrest against the two.

“The Department of Justice has already dismissed the first set of cases because they saw that the proper procedures were not followed because the cases were filed without giving them a chance to submit their affidavit. But it was merely re-filed. It defeats the victory we earlier had,” Nikki said.

Nikki said they have already filed a petition for review for the charges filed against Gamara and Velez last Jan. 2, 2014 but there is no update as of writing.

The case in Bicol, on the other hand, was already dismissed when the witnesses failed to identify Gamara and Velez from the photos presented before the fiscal’s office, Nikki added.

“Our long term vision is not just to have the cases dismissed but to make sure that this would not happen again to other activists,” Nikki said.

Nikki’s father, Renante Gamara, a consultant of the National Democratic Front of the Philippines (NDFP), is detained at Camp Crame. Gamara was arrested on April 3, 2012 in Las Pinas, Manila. Nikki said her father is also slapped with trumped-up criminal charges.

Benny Angeles, a worker of the Metro Manila Development Authority, who has been working with the Courage 2 to demand for their Collective Negotiation Agreement incentive said they continued the fight they started to make sure that Vegas and Camposano’s efforts were not put in vain.

Angeles added that their union and the administration of the MMDA is now looking forward and are hoping for an “amicable conclusion” to their case.

“We were told that we would be compensated for our four-month suspension, which, according to the Civil Service Commission, is illegal and to be given the incentive we have been demanding for ever since,” Angeles said.

“As soon as we get our money, we would chip in to visit them and thank them personally. Last time I visited them, (Vegas) told me, ‘I know you can do it even without me.’ But even when he is already far from us, we continued to ask for his guidance and consult him regarding decisions on how we would go about with our struggle for our incentives,” he added.

Though it has been more than a year since the two were arrested and detained, Sesaldo said they still consider the Courage 2’s case as relatively fast. She said there are many others detained with Vegas and Camposano who has been in jail for more than two years but has not attended a single hearing.

Sesaldo said, “It has been a year and three months since they were arrested and detained. Our call remains the same. They should be freed.”