DAVAO CITY – A Manobo tribal leader in Davao Del Norte claimed that new troops sent near their village have been threatening both men and women and scaring schoolchildren as they accused the village of harboring New People’s Army guerrillas.

Datu (chieftain) Doloman Dawsay of the Manobo community of Salugpongan Ta ‘Tanu Igkanugon (unite to defend the ancestral land) in Talaingod, Davao del Norte said the series of harassments began on March 19 when tribal pupils were held by Army troops stationed in Sitio Nalubas, Brgy. Palma Gil, were “against their will for an hour”. 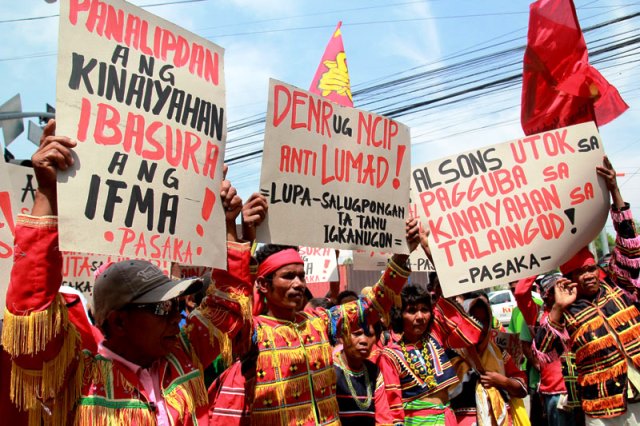 Teacher Roilan Licayan, with 13 students, three parents and a purok leader, Tungig Mansimuy-at, were all headed to Sitio Palungan to “gather chicken and root crops for the graduation day (of the students) when they met the soldiers on the road.”

“They were stopped by 15 soldiers. Then they were separately interrogated, their pictures taken. They were held for an hour before they were released),” said Dawsay in an emailed statement to the media.

“One of the soldiers inspected my bag and checked my IDs. He also inspected my cellphone and read my messages,” Licayan said.

He explained that his group had wanted to get some chicken “as contribution to the graduation festivities of the school.”

Licayan teaches at the Salugpongan Ta ‘Tanu Igkanugn Community Learning Center, a lumad school built with the help of the religious missionaries Rural Missionaries of the Philippines.
Licayan recounted that the soldiers “were asking if there were NPAs (New People’s Army guerillas) in Nalubas and if I had seen them.”

“I told them I personally do not know, but some of the residents said they would pass by but not stay (in the community).”

Licayan said a soldier also asked: “What flag are you using in your school?”

“I told him (soldier) that it’s the Philippine flag and if he does not believe me, we can go to the school and I will show it to him,” he said.

Licayan said seven soldiers then escorted them to Sitio Palunga.

“On our way back we were again asked to wait on the same location (where they first saw us), this time by about 30 soldiers. They told us they were still waiting for more of their companions and that we were to wait with them. We waited for another hour,” the teacher said.

“They were very scared. Who wouldn’t be? The soldiers were armed and they acted as if we have information on their enemies that we are withholding,” he said.

Dawsay also said that other residents in Sitio Pangaan reported how soldiers had stomped on rice crops and cooked their chicken.

Tribal leaders of Sitio Bagang also reported that an old woman named Ubonay Botod Manlaon was allegedly seized by soldiers as she was going to Sitio Basagan with rice grains.

“She was used as guide by the military for a week until she escaped,” said Dawsay.

Dawsay continued that they asked the military to stop the abuses, including the bombing run by two military helicopters at Sitio Pangaan and Sitio Pongpong in Barangay Dagohoy.

In a text message to Davao Today, 10th ID spokesperson Capt. Ernest Carolina denied the indigenous peoples’ complaints and said the military “has policies against what they accuse of.”

“The division needs to investigate the troops involved as we never condone this kind of actions,” Carolina said.

He also said that “(S)alugpungan should forward the complaint to the duly authorized investigative bodies for an impartial investigation.

“We have to make sure these complaints are genuine and not forced by a third party as with events in the past, such us that in Barangay Elizalde in Maco, where some residents claimed in TV interviews they were being forced to join rallies/petitions/complaints,” the military spokesman said.

The Manobos of Talaingod established the Salugpungan in 1993 amid their struggle against logging company C. Alcantara and Sons Inc (CASI, formerly Alsons).

CASI in its website said it “secured a 25-year Industrial Forest Management Agreement (IFMA) with the Department of Environment and natural Resources (DENR) to develop 20,000 hectares of its former forest concession into an industrial tree plantation-enabling CASI to facilitate forest renewal and ensure a continuous supply of wood resources.”

With 25 other datus of Salugpungan, Apoga had declared a “pangayaw (tribal war)” against the Alsons who were expanding their operations deeper into the Manobo forests.

The indigenous peoples were charged with murder in 1997 for the alleged murder of Alsons guards, whom they attacked as a “warning” to the Alsons.

Dawsay says the “reason behind the bold moves of the military now is still the same – they want to log what remains of our forests and to mine the minerals in the mountains.” Reposted by