The peace talks between the Government of the Philippines, represented by the Aquino administration, and the National Democratic Front of the Philippines have been on and off during the last few years. The Aquino administration, which took over the reins of government on a platform of change, and the National Democratic Front of the Philippines, which is representing a revolutionary movement that has been waging an armed struggle during the last 45 years to solve the basic ills confronting Philippine society, could not seem to come to terms on how to address the roots of the armed conflict and achieve a just a lasting peace. And instead of being able to move forward, the prospects for the peace negotiations seem to have become dimmer and dimmer.

With so much at stake – not only in putting an end to the armed conflict, but more importantly, in solving its roots: poverty and social injustices – what needs to be done to push the peace talks forward? What have been the obstacles? What issues need to be hurdled?

Bulatlat.com has come out with the following articles and interviews as its contribution to the people’s clamor for the peace talks to move forward and to the Filipino people’s quest for a just and lasting peace.

Who is afraid of the Reds?

Look beyond the name-calling and the labels – communist-terrorists, extortionists, ideological orphans, Stalinists, followers of a lost cause – what do you see?

Do you see people who have suspiciously amassed wealth and its trappings such as palatial mansions and houses, luxury cars, jewelry, money and capital that they could not spend in their lifetime, land, guns and other toys for the big boys, etc.? Do you see them hiring armed guards, the police and soldiers to enforce their claim over land that is not theirs in the first place? Are they being surrounded by a coterie of people, plus hangers-on, who respond to their beck and call?

Who will rejoice if the NPA is defeated?

Is the military already acceding that the communist New People’s Army is the modern-day Katipunan? Because why would an army general tag Benito Tiamzon as NPA supremo when the government is adamantly insisting that the rebel group is neither revolutionary nor belligerent. In Philippine history, the only other notable supremo was Andres Bonifacio.

The Katipunan reference is apt since the NPA views its struggle as the continuation of the unfinished 1896 revolution. Then and now, the aim of the revolution is to end the brutal rule of the landowning elite. Those who are terrorized by the NPA specter should re-learn the meaning of Katipunan: it is the violence of the ruling system that provokes people to take up arms against the government. Injustice is the real violence in society and not the resistance of the weak and marginalized.

Didn’t we tell you that it is not a Sison revolution?

For the longest time the military has bombarded the public with the propaganda that it is Joma Sison who is leading and controlling the Philippine revolution from his base in Western Europe. This reasoning was accepted without question by many anti-Left intellectuals and they used it to malign natdem activists for allegedly being part of a movement whose leadership is not directly engaged in the daily struggles of the masses. This oft-repeated lie and line would later on become the standard filler in news reports about Joma and the local communist movement.

Nobody noticed it but on March 22, 2014, this malicious tirade was instantly discredited when the military arrested Benito Tiamzon and Wilma Austria and accused the senior citizen couple of being the top cadres of the Communist Party of the Philippines and the New People’s Army. Then, the media suddenly stopped describing Joma as chairman of the CPP and casually reported that the politburo headed by the Tiamzons is firmly established in the country.

Communist leaders, “certified high-ranking,” were captured last Saturday in Cebu City. Something for your banner story, no? A quick look at the top dailies on Sunday confirms that the news is supposed to elicit a frisson of curiosity possibly from people of different persuasions and interests: from foreign direct investors to members of emergent socialist slum collectives; from followers of organized religion to identitarians of LGBTQA+; from anti-communist cynics to followers of the so-called three headed beast Marx-Lenin-Mao; from medium to large-scale local business to comprador big business à la Henry Sy and Ayala; from Marxist political economists to postmodern culturalist epigones. The topic of captured communists is apparently so universal that no profit-driven media can ignore it. Yet, any class conscious person also knows that such profuse discussion on the topic is dangerous for the status quo.

Lawyers of the Tiamzon couple asked the court, presided by Judge Madonna Echiverri, to give them five days to study the records and the evidence so they could appraise their clients about the charges being filed against them, but the court proceeded with the arraignment.

Rex and Lorraine Villaflor, who were arrested along with the Tiamzon couple, “alerted Karapatan when there was no news of Santos’ whereabouts after the much-publicized raid by the Philippine National Police at the rented house of the Tiamzons on March 22.”

A love story and a commitment

More than the romance that is expected, the Tiamzons, and the others mentioned, depicted a tale that does not merely promise the lover the world, but rather with a faithful commitment to change it. 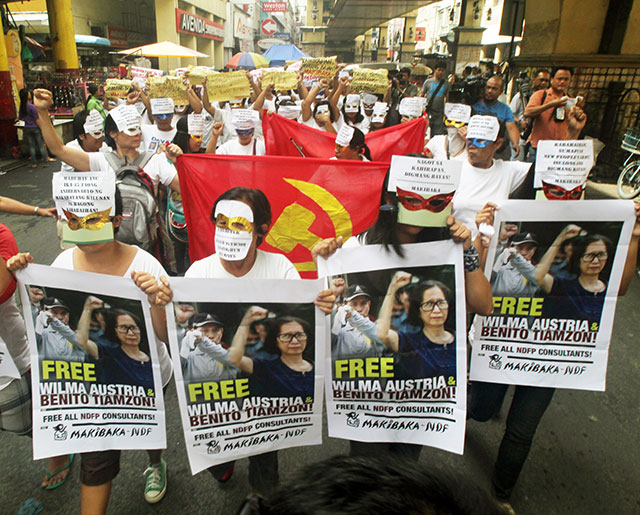 Revolutionary women’s group calls for release of Wilma Austria, others

“This latest flagrant violation of the Jasig by the Aquino regime, in addition to so many other gross violations of the Jasig, most seriously prejudices the GPH-NDFP peace negotiations.” – Luis Jalandoni, NDFP panel chairman

“OPAPP [Office of the Presidential Adviser on the Peace Process] Secretary Deles and Alexander Padilla are setting obstacles to the application of JASIG. They violate the letter and spirit of the JASIG. They cannot declare as ‘inoperative’ a solemn peace agreement approved by the Principals of both Parties.” – Luis Jalandoni, NDFP