‘Job fairs no panacea for joblessness’

DAVAO CITY – As government sets up wider and coordinated jobs fairs in this year’s commemoration of Labor Day, job seekers are warned not to pin too much hope on it, even though job fairs are seemingly being presented like a panacea for the troubling problem of unemployment. 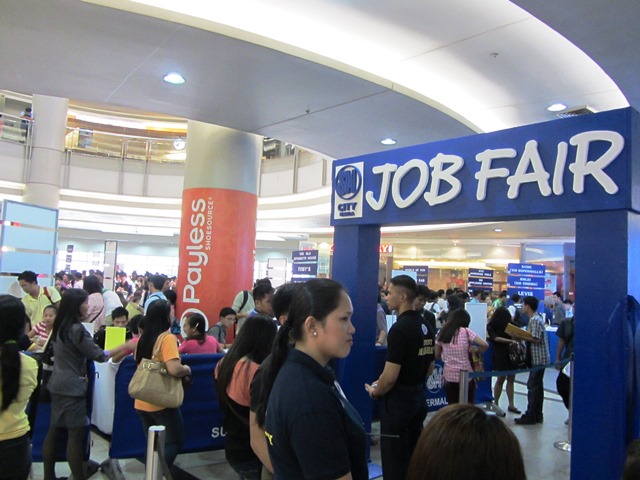 Of the 5,130 job seekers who filed application forms in the malls here, almost half are graduates this year. The rest are undergraduates and high school graduates, including some who are nearing the mandated age of retirement. But only a small percentage of these job-seekers get to land a job.

Beside him is Lloyd Lalaguna, a Communication and Media Studies graduate who is copying down the three preferred qualities sought for call center agents.

Rendon thinks his training in college gives him an edge over other job-seekers, but he is beginning to feel the uncertainty of whether his engineering diploma could help land him a job. He wishes he is wearing a hard hat by now. “Even if I have already passed the board exam, it’s not an assurance that I could land a job immediately,” he says.

Lalaguna says he prefers a call center job as he expects it would give him a better wage than other jobs offer.

Manuel Ravanes, a computer student, also shares Lalaguna’s view and discloses that he did not apply for summer jobs because he plans to skip college to work as a call center agent.

“I would save money first to continue with college,” he said.

Call centers are proving to be most attractive to fresh graduates, as jobs here continue to top the list of offered jobs in the jobs fair.

Rogelio Tripoli, 54, is not yet despairing about finding a job, insisting that he is far more experienced than fresh graduates.

He hopes to get hired by an overseas agency, given that he has his mechanical engineering diploma. He is working as a mechanical supervisor in a light equipment business that imports surplus products from Japan.

His current job cannot finance the education of his four children, and his eldest is headed to college. “These times are really difficult,” he said.

Marco Adnesan, 31, is casting his lot for the first time at the jobs fair. He is a business operator. His father was the president of a mining company in Compostela Valley.

“It was sold to a big foreign company. I was drawn into mining,” he says, although he holds a degree in criminology.

Now he is shoulder to shoulder with people like him – the underemployed.

Statistics from IBON show that 7.3 million people are going through unemployment, due to lack of available jobs for every educational program/course offered in colleges and universities.

Data said that 553,706 graduated college in March and April this year, with a lot of them expressing fear that they would end up unemployed.

Adahbi Conejos, 26, from Kapalong, Davao del Norte, is in her second attempt at the job fair. She did not qualify due to the age limit in her desired job last year.

“I am not not that old to be turned down,” she says, recalling the strict screening she went through last jobs fair.

Government has been trying to diminish the problem of unemployment in the country, by endorsing all job generation efforts including the holding of jobs fair. Its Technical Education and Skills Training (TESDA) has provided training and qualification standards, especially for job aspirants needing skills training.

Critics has doubted the government’s ability to provide jobs, as they pointed to labor policies that push regular workers to the brink of becoming contract workers or working on job orders.

“They do it to divert attention from demands of organized, progressive workers. Government should scrap that policy of contractualizaion and other labor department orders that bear down on workers,” said Romualdo Basilio, general secretary of Kilusang Mayo Uno Southern Mindanao.
Reposted by