“It is like we are under martial law in the economic zone and in the workplace.” – Reden Alcantara, NXP workers union president.

MANILA – “The wage hike we are asking for may buy us a kilo of rice, but the NXP management insists on just half a kilo,” Cathy Oñate, worker and union leader at electronics company NXP, said during a picket in front of the offices of the Philippine Economic Zone Authority (PEZA) Monday (May 12). Their union has reduced their wage hike demand to this amount, after about four months of negotiations. The management, the union said, responded not with good faith but instead, with harassments, intimidation and union rights violations.

The company suddenly terminated last May 5 all the union executives and shop stewards, 24 long-time employees all in all, citing as reason an “illegal strike.” The alleged “illegal strike” stemmed from the absence of majority of the workers during recent legal holidays in April and May 1. Today, NXP and the government agency PEZA have doubled the usual number of guards, goons (according to the union), and members of the RSAF (Regional Special Action Force) so they could watch over the NXP workers from the time they board the shuttle bus to and from work, prevent their contact with the union leaders, and their participation in mass actions.

“It is like we are under martial law in the economic zone and in the workplace,” said Reden Alcantara, NXP workers union president.

Prior to bringing down their demand to the price of a kilo of rice (8 percent of their current wage), the NXP workers union was asking for a 25 percent hike in their current wages , citing NXP’s profit margin (which analysts said was twice that rate, or 52-plus percent). The union is also asking the management to regularize long-term contractual workers in its employ. But the management has only repeatedly cited that it could not give what the workers are asking for because of its global corporate policy against wage hikes. 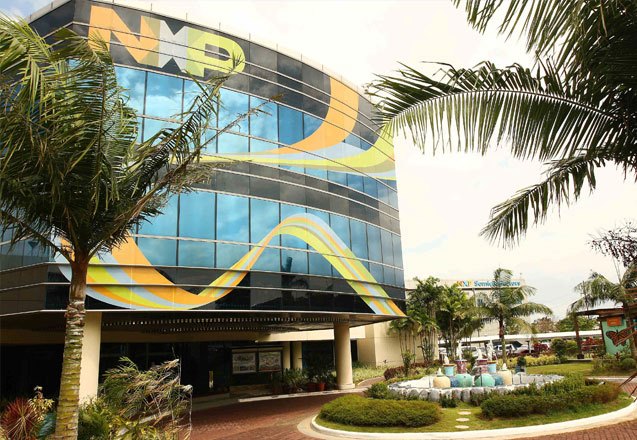 NXP Semiconductors is considered among the global market leaders in the semiconductor and electronics industry. It supplies parts for well-known brands such as Apple, Nokia and Siemens. It is formerly a division of Philips Semiconductor, until it was bought by a consortium of private equity investors in 2006. NXP operates in more than 25 countries; its global headquarters is located in Einhoven, the Netherlands. It employs 24,000 workers worldwide.

In the Philippines, NXP Semiconductors is located at the Light Industry and Science Park I (LISP 1), an economic zone in Cabuyao, Laguna. This NXP branch is one of the six test and assembly sites of NXP Semiconductors worldwide, employing more than 5,000 total workforce. But its regular rank & file workers comprise only 1,500, largely represented by the NXP Semiconductors Workers Union, which traces its roots to the union formed when it was still under Philips and based in Manila 31 years ago.

The union’s record under the National Federation of Labor Unions, an affiliate of Kilusang Mayo Uno, showed that it has fought for the improvement of workers’ wages and conditions as it strives to survive amid the policies of neo-liberal globalization which, in the last three decades, have been decidedly anti-union. It has meant coping, for example, with a change in company location and change in their TNC employer.

When Philips relocated to the LISP 1, an economic zone or enclave administered by the Philippine Economic Zone Authority (PEZA), the union’s struggle for survival turned more fierce, as PEZA’s stated goals include making zones like LISP 1 “world-class, ready-to-occupy, environment-friendly, secured and competitively priced.”

Experiences of workers’ organizations in these economic zones gave rise to these being branded as no-union, no-strike zones. Workers in economic zones reported that they were made to sign waivers against forming or joining unions before they were hired for work. Known unionists also reported being blacklisted for future jobs in the economic zones. Workers also report intensive policing inside the zone, as various gate passes and identification cards are required before they could enter the zone.

Workers led by national labor center Kilusang Mayo Uno picketed the main office of the Philippine Economic Zone Authority in Pasay City Monday morning, as they condemned the agency’s deployment of police forces against protests being held by workers of NXP.

Citing how the government agency enforces policies that go against the country’s labor laws, KMU says PEZA is emboldening companies such as the Dutch-owned NXP Semiconductors, Incorporated to force workers to go to work during regular holidays, and to illegally dismiss workers who refuse to obey such orders.

With hand-shaped placards on which are written messages such as “PEZA Hands Off NXP Workers’ Fight!” the workers called for the agency’s abolition.


“PEZA has proven once again that it is a repressive instrument of big foreign and local capitalists, as evidenced in the NXP workers’ case. It did not conduct any investigation into the labor dispute in NXP but automatically deployed police forces against the workers, proof that it is programmed to take the capitalist’s side in labor disputes,” said Roger Soluta, KMU secretary-general.

NXP union leaders told Bulatlat.com that after they were dismissed without due process last May 5, at least two NXP guards and one member of the RSAF began boarding workers’ shuttle buses, checking the ID cards of the workers on board. Once they found a union leader among the passengers, they made him get off at Gate 2 of LISP 1, where the police station is located.

The workers of NXP have also encountered PEZA’s police forces when they held a protest action last April against the management’s refusal to increase their wages and regularize contractuals in their then ongoing negotiations for a Collective Bargaining Agreement.

PEZA’s police forces were again deployed against the workers when the latter held protests last May 6 and 7 against NXP’s illegal dismissal of 24 union leaders, after the company accused the workers of holding illegal strikes for refusing to go to work last April 9, 17 and 18 and Labor Day – all of which were regular non-working holidays according to the government.

From May 6 to present, the workers of NXP are holding protest actions against the company’s adamance in the CBA negotiations and its sudden termination of their officers. These actions include noise barrages and union gatherings inside the workplace, and in some cases, refusal to board shuttle buses so the workers could hold meetings as a union.

On Monday as the KMU was holding a picket in front of PEZA in Manila, Reden Alcantara, union president of NXP workers, said the management is holding meetings with workers. He shared that the management is threatening the workers with termination if they continue to join union action and protests.

The transnational company NXP Semiconductors in the Philippines is currently headed by Jose Miguel Orleans. According to unionists interviewed by Bulatlat.com, he is a US citizen Filipino who has specialized in “crisis management.” Until 2012, Orleans was vice president and plant manager in other big semiconductor companies with up to 5,000 workforce. Orleans replaced a Thai general manager at NXP Cabuyao. 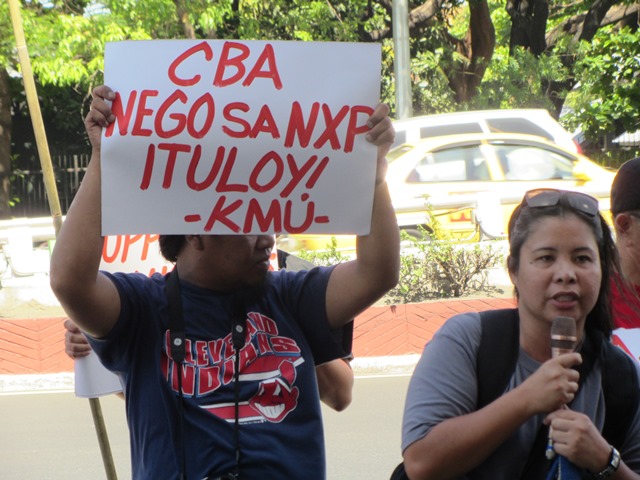 “We were simply exercising our right to protest after the company refused to hike wages and regularize contractuals and after it illegally dismissed union officials. It is revolting that the government of the so-called Republic of PEZA is again siding with big foreign capitalists against us workers,” said Alcantara. As president of the NXPSCI Workers’ Union, he is one of the 24 union leaders who were dismissed by NXP.

KMU said the fact that the NXPSCIWU is one of the very few unions inside the LISP1 and the country’s economic zones – despite low wages, contractual employment and violations of trade-union rights in these zones – shows that PEZA has been a repressive instrument of big foreign and local capitalists and should be abolished.

Speaking at the picket protest, Roger Soluta, secretary general of KMU, said PEZA has been working only at providing big foreign investors “a safe haven for profits,” at the expense of Filipino workers who are forced to endure low wages and repression.

The experiences of unions in having to battle state forces and government agencies for a wage hike that amounts to just a kilo of rice also brings to question the kind of growth being proudly announced by the Aquino government, including the PEZA head, Lilia de Lima. According to workers organizations such as the KMU, the foreign-investment-led economic policies being implemented by the Aquino government obviously do not work for most Filipinos, considering that the rapid 6-7 percent Gross Domestic Product growth it reported is non-inclusive and jobless.