Hundreds of farmers and their supporters are facing various criminal charges filed by Tadeco, Tarlac police and the DAR-hired survey firm.

MANILA – Without being shown any warrant of arrest, a farmer in Hacienda Luisita was arrested by authorities May 16, according to Unyon ng Manggagawa sa Agrikultura (Uma).

Vicente Sambu, a member of Alyansa ng Magbubukid sa Asyenda Luisita (Ambala), was arrested by Tarlac City police between 2 p.m. and 3 p.m. Friday from his home in Asturias village, Tarlac City. He is now detained at San Sebastian police station in Tarlac City.

Sambu, along with four others, was first arrested on December 21, 2013 when he and his colleagues attempted to stop the security guards hired by the Cojuangco-Aquinos from bulldozing agricultural lands in Balete village. They were charged with physical injury and detained at Camp Macabulos, provincial headquarters of the Philippine National Police (PNP). The five were released after two days; the prosecutor reverted the case to preliminary investigation for lack of probable cause.

In a previous interview with Bulatlat.com, Sambu said ten policemen beat him up and forced him inside the police vehicle. The charges filed by the Tarlac Development Corporation (Tadeco), a firm owned by the family of President Benigno Aquino III, were recently dismissed. A separate charge of direct assault to persons in authority was filed against Sambu and his companions January 2014 in relation to the Dec. 21, 2013 incident. Also charged were Jose Baldiviano, Ronald Sakay, Rod Acosta and Mamerto Mandigma. 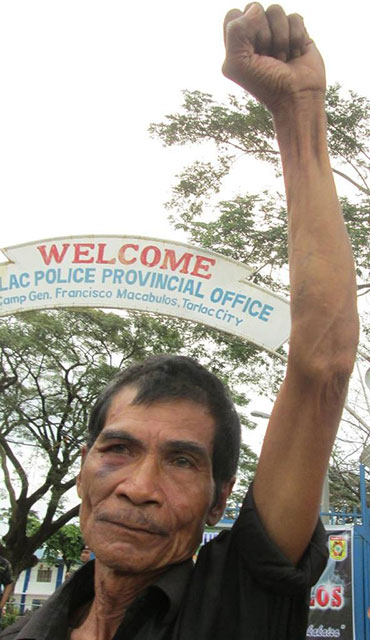 According to Uma, only two hearings on the case took place and the complainants failed to show up in the said hearings.

Luisita Watch, a network of supporters of Hacienda Luisita farmers, condemned the incident.

“Tadeco continues to grab land from the farmers despite the notice of coverage issued by the Department of Agrarian Reform and the Supreme Court decision ordering the distribution of land to the farmworker-beneficiaries,” the network said.

Hundreds of farmers and their supporters are facing various criminal charges filed by Tadeco, Tarlac police and the DAR-hired survey firm. The charges include unlawful detainer, malicious mischief, grave coercion, physical injury, trespassing, threat, among others.

“We are only fighting for our right to our land and yet we are the ones being arrested and imprisoned,” Florida Sibayan, Ambala chairwoman, told Bulatlat.com in a previous interview. Sibayan herself has been charged with malicious mischief, grave coercion, direct assault and threat.

Members of Ambala filed countercharges against the Cojuangco-Aquinos, members of the local police and Tadeco security guards before the Department of Justice (DOJ) in January this year. To this day, the DOJ has not acted upon the complaints filed by Hacienda Luisita farmers.