The 28 complainants are seeking Aquino’s removal from office on the grounds that he has culpably violated the Constitution and betrayed public trust in having implemented the DAP.

MANILA – “In all these years — and I have passed through a lot of bad government practices – so far, the DAP is the topnotcher.” This is how Archbishop-emeritus Oscar V. Cruz described the Disbursement Acceleration Program. He is one of the 28 signatories to the first impeachment complaint against President Benigno Noynoy Aquino III, which was filed today July 21 in the House of Representatives. The DAP is the main basis of the impeachment complaint.

The 28 complainants are seeking Aquino’s removal from office on the grounds that he has culpably violated the Constitution and betrayed public trust in having implemented the DAP.

The signatories to the impeachment complaint include persons who earlier questioned the DAP in the Supreme Court, plus other anti-pork advocates who figured in last year’s Million People March and subsequent protest actions. They are religious leaders, members of the academe, corruption whistleblowers and sectoral leaders from various progressive organizations.

They said in their complaint that the Disbursement Acceleration Program turned the General Appropriations Act (GAA) into one man’s pork barrel. Based on what the public has managed to glean so far about the DAP funds (the Aquino government has yet to make a full disclosure), the impeachment complainants said Aquino illegally juggled funds from one program to another, largely “to projects based on his mere whim.” The anti-pork groups accused Aquino of having perpetrated at least 116 counts of crime of technical malversation.

Their impeachment complaint cited the legal or factual baselessness of three of Aquino’s oft-repeated and main excuses for having implemented the DAP:

(1) The implementation was not done “in good faith.” Claim of good faith is negated by Aquino’s 12 years of experience as a member of Congress with the sole power of appropriation;
(2) The revised Administrative Code cannot make DAP legal, as President Aquino cited in his speech defending the DAP, because it was already effectively repealed in the Supreme Court’s Dementria v. Alba ruling; and
(3) DAP’s supposed beneficial effect has been proven false in various studies.

The impeachment complaint also said the list of DAP projects that the Aquino administration released to the public showed that these “have nothing to do with stimulating the economy save for increasing government expenditures.” Worse, based on some confirmed data about the DAP funds as unearthed so far, the complainants said the funds helped perpetuate and exacerbate the corruption-ridden and patronage-driven system of pork barrel.

In order to have these funds in Aquino’s control, the signatories to the impeachment complaint said Aquino withheld the funding for so-called slow-moving projects and took over control of “savings” of agencies that used to be earmarked for its personnel development. So far, it has been revealed that teachers’ benefits and those of government employees have suffered because these funds were centralized instead as presidential pork barrel.

In a related development, reports revealed that nearly 900 Special Allotment Release Orders (SAROs) of more than 1,000 total DAP SAROs were given to lawmakers, bolstering the complainants’ charge that DAP functioned as presidential pork.

Presidential spokesman and lawyer Edwin Lacierda said they will defer to the House and that they will assess the allegations of the impeachment complaint.

So far, though, Malacañang has been on a vindictive mode with regard to the DAP. Critics said President Aquino has “bullied” the Supreme Court with threats and innuendos if it will not agree to its view of how public funds are to be treated. After this, the president asked for “yellow ribbon” support amid swift filing of its allies of resolutions to probe Supreme Court funds.

“Deferring to the House”

House leaders have previously threatened to kill the impeachment moves against Aquino. Even among anti-pork and anti-corruption critics, there were those who have professed lack of confidence with “the numbers” when it comes to pushing for Aquino’s impeachment. 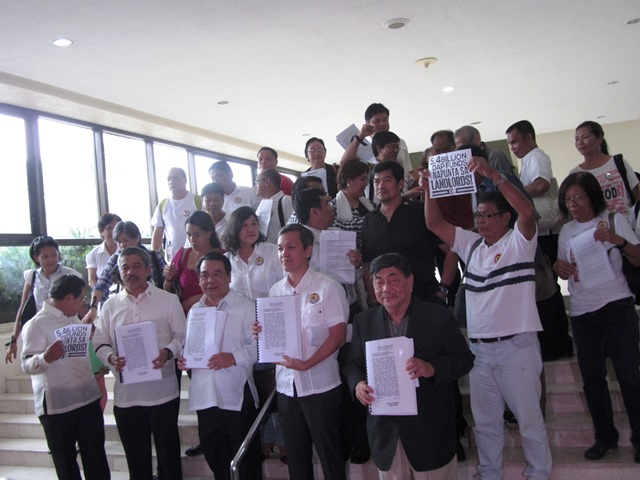 But three-termer Bayan Muna Rep. Satur Ocampo said the important thing is “There would be a record of a broad group of organizations and individuals questioning the president’ breach of the Constitution and public trust.”

When Congress opens session on July 28, the impeachment complaint will immediately greet Aquino and his allies, many of whom are suspected of having received DAP funds. Whatever treatment the House of Representative gives to the impeachment complaint, Ocampo said, the other important thing is that it (impeachment moves) would result in the continuous unearthing of details on how the public funds are being spent.

The 2015 budget would be up for deliberation when Congress opens next week. The year 2015 happens to be a pre-election year, when politicians prepare their war chest for the 2016 elections.

If a third of members of House of Representatives approve the impeachment complaint, Ocampo said, it would be submitted for plenary debates. If not, as Aquino allies vowed to kill it, the complaint will be referred to the House Committee on Justice.