“The Hoya Glass management told us that they had to close down to avoid incurring losses. But according to the company’s financial statement for 2010 to 2012, which was submitted to the Securities and Exchange Commission (SEC), it has in fact registered bigger profits.”

MANILA – For workers of Hoya Glass Philippines Inc., a Japanese-owned company located at the First Philippines Industrial Park in Tanauan, Batangas, years of hard work have been yielding fruits but they are being forced to struggle just to get a chance to enjoy it. These fruits include increasing profits of the company, an exporter of glass substrates used as component in hard disk drives of computer products like Seagate, Hitachi and Western Digital. Another fruit is the workers’ achievement in having formed and registered a union in April of this year. In the Philippines, particularly in economic zones reputed to have unwritten no-union, no-strike policies, successfully forming a union is considered a feat.


But the Hoya Glass Disk workers have yet to have their union recognized by the company as their sole bargaining agent. So far, the union is battling various constraints thrown its way, from massive termination to irregularities in union’s certification election.

A long hard slog to form and work a union

Ian Chu Ordoño, unionist in Hoya Glass, led the Hoya Glass workers in filing a formal protest with manifestation this Wednesday August 6 at the Department of Labor and Employment regional office in Calamba, Laguna, citing irregularities in their certification election held last July 31. The independent union has won, but the company, with the agreement of the Labor department in the region, has sprung a technicality with which it can use to reject the result of the certification election, and thus the union’s legitimacy as Hoya workers’ sole bargaining agent.

The battle to have their victory in the certification election recognized and respected is just the latest in the workers’ struggle to be unionized. The management has apparently attacked the union in the form of massive termination last April, and now, it is using that attack to frustrate the efforts of what’s left of the union.

In a pre-election conference July 15, the Japanese-controlled company and the Labor department both agreed to list as voters in the certification election some 1,874 rank-and-file workers. But most of these workers have already been terminated by the same company in April 30 this year. The workers have also been made to sign a quit claim and waiver. As such, most of them are legally no longer employed by the company. Those who remained employed by the company are those who refused to sign the waiver and quit claim, and they are the unionists left from the more than 800 who first volunteered to be unionized.

Statements by Pamantik-Southern Tagalog said the mass termination was done to sabotage the nascent union and consequently the likelihood it would expand to cover all workers and campaign for wage hike and benefits. In fact, the company told the Philippine Export Processing Zone Authority (which manages the ecozone where Hoya is operating) that it would only undergo a “cessation of operations,” and not a shutdown, contrary to what it told the workers when it terminated them.

In an interview, Ordoño told Bulatlat.com how, less than a week after they secured from the DOLE in Calamba their union’s registration papers, Hoya management gathered the workers in a general assembly and there, dropped the bombshell that they were “closing down” the company.

“The Hoya Glass management told us that they had to close down to avoid incurring losses. But according to the company’s financial statement for 2010 to 2012, which was submitted to the Securities and Exchange Commission (SEC), it has in fact registered bigger profits,” said Ordoño.

Where they were gathered at the general assembly, the Hoya Glass workers were later forced to sign waiver and quit claims, said Ordoño. If they sign, the management promised the workers that they would then get their check and they can leave.

“Sad to say, we were being hostaged (in the assembly hall). We tried to stop them, but there was no escaping it because the management had included the workers’ latest wages.

We went to National Conciliation and Mediation Board to file case of illegal closure, union busting and unpaid salary,” said Ordoño. The workers who did not sign the waiver and quit claim were not given their salary.

But after filing the cases, Ordoño said, they were barred from entering the First Pacific Industrial Park (FPIP).

Years of service down the drain, just like that?

Tall, slim, neat and simpatico, as they say in Filipino, Ian Ordoño hardly fits the stereotype of a rabble-rousing economic saboteur, which the government and employers sometimes portray unionists.

Co-worker and fellow unionist Analyn Hoc, 35, looks more like one of characters in a Korean telenovela. Both Ordoño and Hoc are college graduates who have good employment records.

Ordoño started in Hoya Glass as production operator in 2004, working his way up to eventually become line leader. Before their output turns into sheet glass for export, it has to pass through a series of polishing, cleaning, checking to ensure it has the right thickness, etc. He said a worker typically works with four machines, standing before it for 12 hours.

Analyn Hoc, meanwhile, has been with Hoya for 14 years. She told Bulatlat.com about a seeming blacklist against Hoya unionists in the industrial park. “They won’t let someone from Hoya to pass through the gate.”

She cited the experience of a former co-worker who went to hand a letter to PEZA. She was not allowed to enter the gate and was told to just leave her letter there. She insisted, but she was told that she would not be allowed in even if she enters it accompanied by a security guard.

Hoc said there are a few unions in the industrial park but most are “yellow,” or management-led unions.

The two members of Kasama sa Hoya told Bulatlat.com that they once approached the Tanauan Mayor Thony Halili for help in the labor dispute. As a result, the vice-mayor came to them to deliver what he said was the mayor’s message: The mayor promises the Hoya workers would get their jobs back, but the workers must no longer unionize. Mayor Halili was quoted as saying also that Tanauan might be tagged as a city full of unionists and if that happens, the investments would not come in.

Previous attempts at forming a union in Hoya Glass had failed for various reasons, all not because of a lack of willing unionists. Hoya Glass used to be called Nippon Sheet Glass, but it changed name to Hoya when workers tried to form a union, said the Kasama sa Hoya unionists.

Another effort failed because apparently, the organizers from Akbayan sold the fight, they alleged. Contractual workers attempted also to form a union in 2011, when Hoya was located in Special Economic Processing Zone, Laguna Technopark in Biñan, but all 1,500 of them were fired. Hoya started relocating production to Tanauan, Batangas’ First Pacific Industrial Park in 2010, completely moving it by 2012 but maintaining warehouse in Laguna.

Analyn Hoc said a source told them the company might relocate again within the Philippines to frustrate unionizing efforts.

Ordoño said Hoya Glass Disk Philippines reported to SEC that it earned $27 million in 2012, $37 in 2013. Only 1.5 percent of earnings went to employees, including the top executives.

At present, Pamatik-Southern Tagalog and KASAMA sa HOGP-Ind (Kalipunan at Saligan ng Manggagawa sa Hoya Glass Disk Phils. – Independent) is holding a protest camp in Calamba in front of the Labor department office in the region. 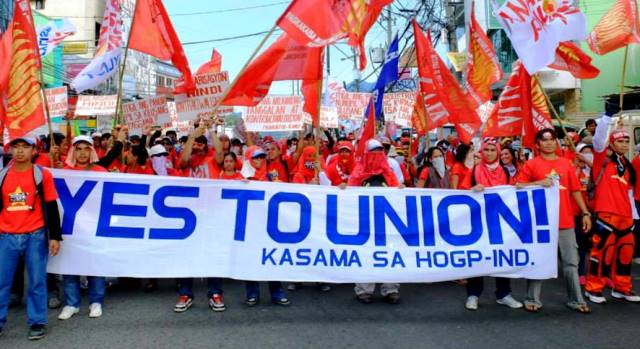 In a statement posted in its website, and written on placards in their protest camp at the labor department, Pamantik-Southern Tagalog said the Japanese-controlled Hoya Glass Disk Phils. Inc., which has Filipino businessmen in its board and presided by Arnel Andrade, is a “blatant union-buster.”

While maintaining a protest camp in front of the Department of Labor and Employment, Pamantik and members of Kasama sa HOGP are also holding mass actions from time to time in front of the First Philippines Industrial Park, as well as in Calamba. They are urging the Labor department to side with the workers, and recognize the union as the sole and exclusive bargaining agent of workers of Hoya Glass Disk in the Philippines.