Why not rollback diesel prices as well? Drivers ask

Piston is calling on drivers and all the riding public to continue to press for a rollback in oil prices, to press the government to nationalize and regulate the oil industry, and to condemn the Aquino government for its inaction that, Piston said, is tantamount to collusion with the oil cartel.

MANILA – Why are oil companies not rolling back prices of diesel, when prices of gasoline have been slashed P0.85 yesterday? To press their calls for rollback, drivers and small operators group PISTON staged a picket in front of the headquarters of Shell in Makati City, morning of Aug. 12. 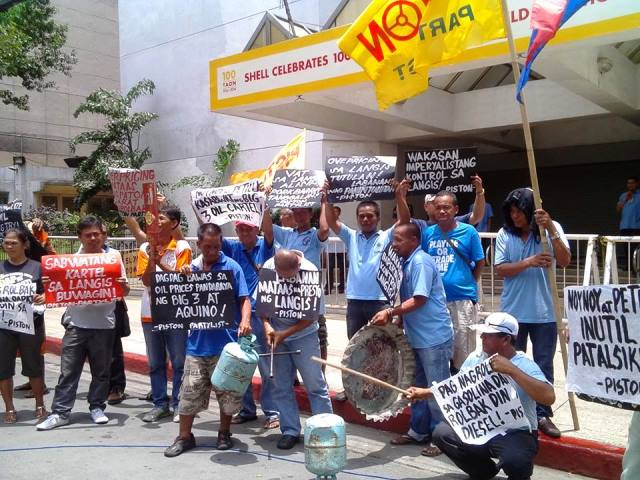 As drivers of public transport vehicles are mainly using diesel, rollbacks in diesel prices would have given them some relief, and their riders, too, said George San Mateo, national president of Piston. The transport leader lashed out at the three big oil companies (Shell, Petron and Caltex-Chevron) which together supply much of the country’s petroleum needs.

“It is very obvious that the Big Three Oil Cartel are controlling, limiting and scrimping on the price rollback for diesel because much of their superprofits come from the sale of diesel. About 70 percent of petroleum sold in the country are diesel products,” San Mateo said.

Since President Benigno “Noynoy” Aquino III delivered his State of the Nation Address last July 28, Piston noted that the diesel price has gone up. Its price was never slashed even when prices of other petroleum products, such as gasoline, were rolled back.

As a result of higher oil prices, the so-called oil cartel has consistently registered bigger profits. Five days ago, Danding Conjuangco-controlled Petron Corp., the country’s biggest oil refiner, posted a net income of P3 billion ($68.4 million) in the first half of the year, nearly triple from its P1.1 billion ($25.1 million) earnings a year ago. Petron has close to 2,200 stations nationwide. It expects to boost sales and profits further with increased sale from the fishing and power generation sectors as the latter resort to using power generators amid the supposed tight power situation. 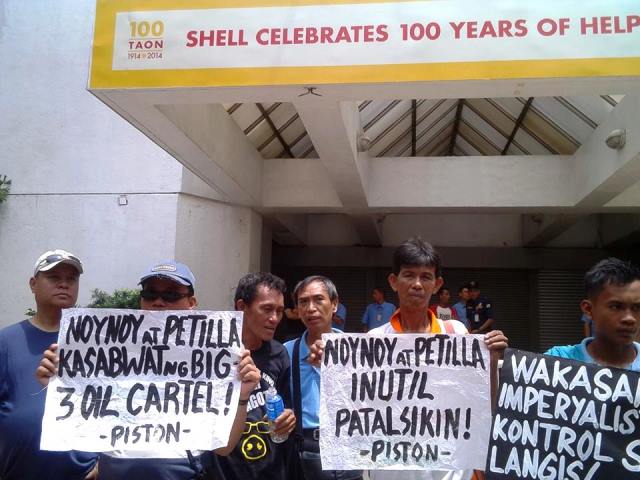 Pilipinas Shell has not reported its profits yet for the first half of 2014, but its mother company, the global Royal Dutch Shell, has reported that its overall profit has more than doubled. Pilipinas Shell announced recently that it is expanding refining capacity in Batangas, to meet projected increase requirement in 2016. It is also building more retail sites. It is spending P7 billion ($160 million) for it’s expansion.

Shell also controls, together with Chevron-Texaco and Philippine National Oil Company the Malampaya Deep Water Gas-to-Power Project off the coast of Palawan. Exploiting the country’s ample supply of natural gas, the Malampaya operation has been another thorny issue not just for drivers but for all energy consumers in the Philippines.

In a previous interview, San Mateo questioned why the Malampaya operation has not brought down the cost of power and ensured sufficient power supply for the country. Groups also questioned why the royalties the government gets from Malampaya operations are not being used for energy projects, as originally intended. Worse, the Malampaya fund has been made part of President Aquino’s pork barrel funds, which he used for the purchase of obsolete and decommissioned US Coast Guard cutters.

There have been proposals before for public transport to shift to using natural gas, but it did not prosper for lack of support to drivers and operators. San Mateo and Piston also pointed out that the supply of natural gas is also under the control of the Big Three.

Piston decried the now more than four years of “Aquino’s inutility in addressing the issue of overpricing, profiteering and price manipulation by the Big Three Oil cartel.”

San Mateo said President Aquino is allowing this exploitative burden on Filipinos to continue because the government also gets a share in the gains from higher oil prices, through the 12 percent Value-Added Tax on oil products.

The 12 percent VAT on oil is one of the major sources of government revenues, which, in turn, are being bled dry by the increasingly big pork barrel of President Aquino, San Mateo said during the picket.

In the ongoing deliberations in Congress for the Malacañang’s proposed 2015 budget, increasing tax impositions and revenue-generating mechanisms are being proposed to partly pay for the bigger proposed budget, which also included bigger pork.

Piston is calling on drivers and all the riding public to continue to press for a rollback in oil prices, to press the government to nationalize and regulate the oil industry, and to condemn the Aquino government for its inaction that, Piston said, is tantamount to collusion with the oil cartel.

Piston is batting for a nationwide P6 fuel discount for all public utility vehicles in all gasoline stations particularly of the Big Three.

The drivers’ group is also set to conduct a series of protest actions this month against the increase in fines being implemented by the Department of Transportation and Communications (DOTC). The drivers complained that it only adds burden to drivers and the riding public.