You Are Here: Home → 2014 → September → 1 → On the International Day of the Disappeared | ‘Convict Palparan,’ say kin of desaparecidos

On the International Day of the Disappeared | ‘Convict Palparan,’ say kin of desaparecidos

“We have done everything we could. But we are faithful to what we started and we will pursue it until the end.” – Edita Burgos

MANILA — Asher Cadapan would always be seen just standing next to his wife Erlinda, as she gives fiery speeches. He keeps a silent presence as the Cadapan couple, along with human rights defenders, search for their missing daughter Sherlyn.

“I easily get emotional when it comes to Sherlyn,” Mr. Cadapan, 67, told Bulatlat.com.

But he said he has no soft spot for retired Maj. Gen. Jovito Palparan, the accused in his daughter’s enforced disappearance. There was no arrogance in the face of Palparan — who looked thin, old and even frail during his arraignment on Aug. 18, Mr. Cadapan said. Palparan’s appearance was far from the general he first saw during the previous hearings.

“I have nothing but anger for him,” Mr. Cadapan said, “Deep in my heart, there is nothing I hope for but to know where my daughter is.”

On August 30, Mr. Cadapan joined other relatives of victims of enforced disappearance and human rights advocates in a protest action at the University of the Philippines as they commemorated the International Day of the Disappeared. 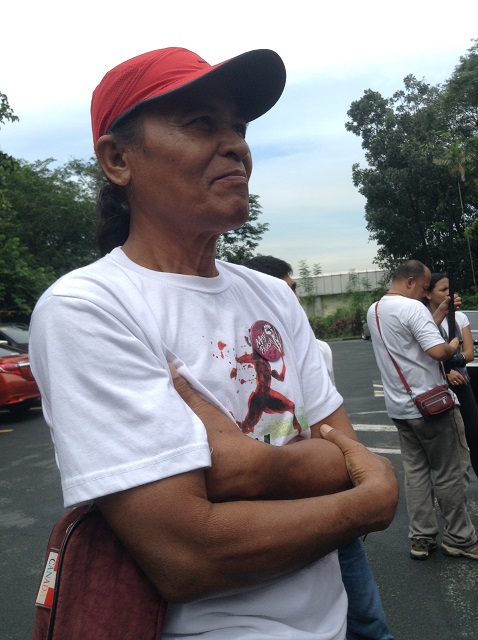 During the protest, they demanded the conviction of Palparan, the highest military official ever indicted for human rights violations. He was nabbed on Aug. 12 in a house in Sta. Mesa, Manila after three years of evading arrest in relation to the abduction of UP students Karen Empeño and Sherlyn Cadapan and farmer Manuel Merino.

Palparan did not enter a plea during his arraignment. The Malolos court ordered his transfer to the Bulacan Provincial Jail despite his pleas to stay in the National Bureau of Investigation office in Manila, citing threats from members of the New People’s Army, the armed wing of the Communist Party of the Philippines.

The kin of desaparecidos and human rights defenders marched from the College of Mass Communication to the Palma Hall building, where they formed a collage of Palparan’s photos, depicting the word “convict.”

Aya Santos, secretary general of the human rights group Desaparecidos, said victims of enforced disappearances are not merely statistics but principled men and women who dreamed of a better society only to fall victims to such heinous crime.

“There was so much joy when I learned of his arrest. I even cried because I could not contain my emotions,” Edita Burgos, mother of missing activist Jonas, told Bulatlat.com.

Mrs. Burgos said she learned of the arrest at around 4 a.m. after receiving a call from the media. As the day went on, she said, she began to doubt if there was an ulterior motive behind his arrest “but at the end of the day, I am still grateful that he has finally been arrested.”

Santos reminded the government that committing and perpetuating enforced disappearance is a crime, referring to Republic Act No. 10353 or the Anti-Enforced or Involuntary Disappearance of 2012.

Two years since the law was passed, however, Santos said no one has been prosecuted, not even Palparan.

Concepcion Empeño, mother of Karen, said that if the missing UP students were really members of the NPA, then they should have been arrested and given a day in court. “They shouldn’t have abducted them,” she added.

“Do not allow government officials to make a fool of us. They would deny that human rights violations exist. But we are living proof that it does,” Mrs. Cadapan said during the program.

Mrs. Cadapan added that it is not their daughters’ fault if they want to help and reach out to the people. 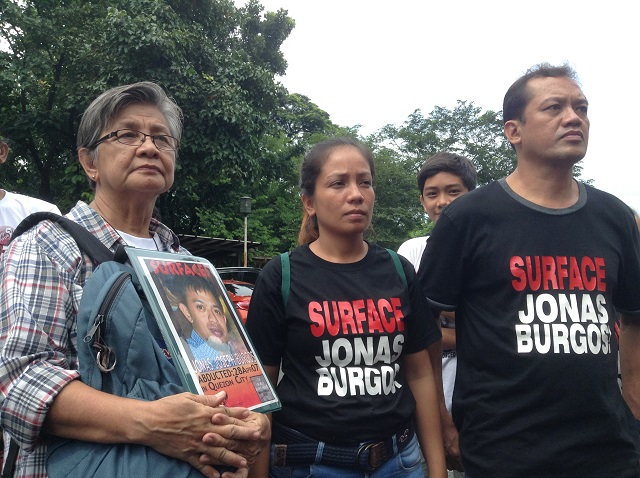 Mrs. Empeño said she remains fervent in her search for her missing daughter. Since Karen’s abduction many things have changed, she said, adding that what others would deem “abnormal” is now her “new normal.”

“And my life would not go back to normal until she is surfaced,” Mrs. Empeño said.

Justin Villeno, son of missing labor leader Benjamin Villeno, said his life, too, was changed since his father was abducted on Aug. 27, 2013.

He said he was once among those who hated activists for holding rallies and causing heavy traffic. Today, however, he said he would strive to understand the principles his father stood for.

“Is helping your fellow worker a bad thing? I do not think so. Yet, my father is missing,” Villeno said, adding that it is ironic how those which he considered as “bad” such as stealing from public funds or accused of kidnapping are still free.

Seven years since Jonas was abducted, his family is currently awaiting the pre-trial of Maj. Harry Baliaga, one of the accused in his enforced disappearance.

Asked if the family is, at one point, exhausted with their long search for Jonas, Mrs. Burgos admitted that there are times she would, especially when it comes to their resources, which, she added, is running dry.

“We have done everything we could. But we are faithful to what we started and we will pursue it until the end,” Mrs. Burgos said.

But she said the family remains united in their pursuit for justice. During the protest, the Burgos family was complete. “I even checked their attendance,” Mrs. Burgos said in jest.

There is also fatigue in garnering media interest, which, Mrs. Burgos said, had a big contribution in their search for Jonas. She said however that her family still has a positive perspective, entrusting their struggle to God’s will.

When she finds Jonas, Mrs. Burgos said they would go back to UP so students could meet him. “He is handsome. But he is no longer single,” she jested.

Batralo said she wishes she is as young as the students who arrived to join the protest. “So we would have that youthful zest to find our missing loved ones.”

Mrs. Burgos said she feels secure to be in the presence of people who shared the same pain of losing a loved one to enforced disappearance.

“I feel secure when I am with them because we are together. No one would dare arrest us,” she said, “There is a sense of security.”

Before Palparan’s arrest, Mrs. Burgos said she was insulted when she learned of how no less than Gen. Eduardo Año, then chief of the Intelligence Service of the Armed Forces of Philippines, spoke highly of Palparan, saying that he was a good military strategist, which made it difficult for authorities to find him.

Año was recently appointed head of the 10th Infantry Division of the Philippine Army in Southern Mindanao.

“He should have the delicadeza not to say those things. But it was an indication of how Palparan would be treated,” she said, adding that Año was once one of Palparan’s men.

Getting to know the disappeared 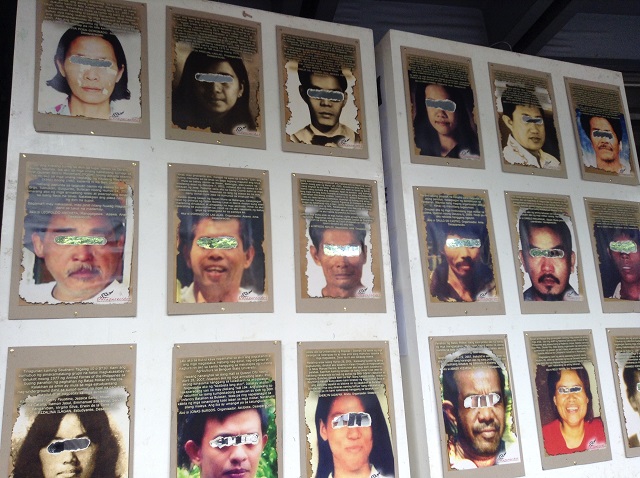 Mr. Cadapan said he never stopped Sherlyn from being an activist. There was a time, he recalled, when he told Sherlyn to moderate her activities. But she reminded him of how he, too, as a worker, could feel what she was fighting for.

Though missing for eight years now, Mr. Cadapan said he could feel his daughter’s presence in many people who would approach him and tell him how Sherlyn has helped them.

Mrs. Burgos said she, too, felt like she was starting to know the other side of Jonas through the people he met and helped. During rallies, she said, there would be random people who would tell her how Jonas helped a community in Nueva Ecija secure a water system, or a kid who would refer to Jonas as kuya (older brother) and how he helped them with their assignments, or how he bought them colas.

Someone once also told Mrs. Burgos that whenever Jonas needed to think, he would sit under a tree and hold a rosary.

The night before his daughter Sherlyn was abducted, Mr. Cadapan, who was then working in the province of Mindoro, said they talked over the phone. “Daddy, we should go home for Mommy’s birthday on Sept. 21,” Sherlyn told his father.

Mr. Cadapan remains hopeful that their promise to each other would still come true. To this day, however, Sherlyn and Karen are still missing while Palparan has yet to be prosecuted for the crimes he is accused of.