“Judging from the statements issued so far by DFA officials, it seems that President Aquino’s emerging position is to kowtow to US interests by invoking legal niceties in the Visiting Forces Agreement. Instead of fighting for our country’s sovereignty and safeguarding the rights of the Philippines and the victim Jennifer, the DFA is lawyering for the US.” – Gabriela Women’s Party Rep. Emmi de Jesus

Pemberton remains under US custody on board the USS Peleliu at Subic Bay port.

Activists and lawmakers, meanwhile, had called for his turnover to Philippine custody, as well as for the revoking of the Visiting Forces Agreement and the Enhanced Defense Cooperation Agreement, which they said provided conditions for crimes against Filipino civilians committed by US troops.

Kabataan Party-list Rep. Terry Ridon had earlier said that the inquest proceedings in the brutal killing of Filipino transgender woman Jennifer Laude was “being hampered” by the US government’s insistence to hold the suspected US Marine in its custody.

“The Olongapo police is actually adamant on beginning the inquest proceedings against Pemberton. However, the issue of custody is stalling the process and leaves the PNP no choice but to go through direct filing,” Ridon said after meeting with Olongapo City PNP Chief Inspector Gil Domingo. Ridon went to the police headquarters in Olongapo City in Zambales on Oct. 15.

Pemberton was one of the 4,000 American troops who participated in the Philippine-US Bilateral Exercises (Phiblex) held in the country from Sept. 29 to Oct. 10. He was identified by a witness from a photo line-up as the person last seen with Laude on Oct. 11 before she was found dead at the Celzone Lodge in Olongapo City.

Police is required to present its suspect during inquest proceedings. If the suspect is not in custody, police could resort to direct filing at the fiscal’s office, according to Ridon.

“The implication of having to go through direct filing is that it provides the opportunity for Pentagon to whisk Pemberton away from the country, given that technically, no charges has been filed and no warrant of arrest has been issued at this point,” he said.

“The delay in the filing of charges against Pemberton due to custody issues should be reason enough for Washington to waive custody and for the Philippine government to insist custody of Pemberton,” Ridon pointed out.

“This custody issue is a clear proof that the VFA is truly an unequal treaty. Instead of protecting Filipinos, the provisions of the VFA on custody of criminally-liable military servicemen are actually barring us from exacting justice,” Ridon said.

Meanwhile, representatives of the Gabriela Women’s Party (GWP) are calling for the suspension of joint military exercises and programs of the Philippines and the US in the wake of Laude’s killing. 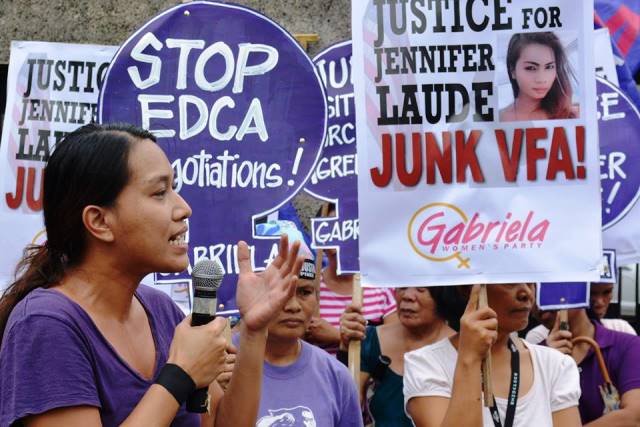 At the meeting of the the Mutual Defense Board-Security Engagement Board (MDB-SEB) in Camp Aguinaldo on Oct. 14, Armed Forces of the Philippines (AFP) Chief of Staff Gen. Gregorio Catapang Jr. and US Pacific Command chief Admiral Samuel Locklear agreed on the schedule of more joint military exercises.

GWP Rep. Emmi de Jesus De Jesus said in a statement Oct. 15, that their group demands the suspension of “all joint activities and programmes.. until a just and dignified conclusion to all pending complaints, including Laude’s killing, is satisfactorily achieved.”

De Jesus along with and fellow GWP Rep. Luz Ilagan are set to file a resolution at the House of Representatives “mandating the committees on defense and foreign affairs to initiate moves towards a unilateral termination by the Philippines” of the VFA and the Enhanced Defense Cooperation Agreement (Edca). Earlier this year, the legislators had filed a resolution calling for a review of the VFA.

The GWP solons also called on the Aquino administration to cancel bilateral talks planned for the Edca. The MDB-SEB called off talks for Edca pending the decision of the Supreme Court on the constitutionality of the agreement.

“It hurts that Aquino had the gall to pursue those talks with Locklear while the people are mourning Jennifer’s death. We demand justice for Jennifer and Aquino can start by junking both the VFA and EDCA, whatever the outcome of the Supreme Court ruling,” Ilagan said.

“Judging from the statements issued so far by DFA officials, it seems that President Aquino’s emerging position is to kowtow to US interests by invoking legal niceties in the Visiting Forces Agreement. Instead of fighting for our country’s sovereignty and safeguarding the rights of the Philippines and the victim Jennifer, the DFA is lawyering for the US,” De Jesus said.

Meanwhile, Gabriela led protesters at the Department of Foreign Affairs in Pasay City to demand Pemberton’s handover to Philippine custody, and for the Aquino administration to assert the people’s rights against the US.

“The injustice done to Jennifer does not merit such ambivalence and defeatism. The outraged citizens need to hear a stronger, more forceful assertion from an aggrieved country,” said Joms Salvador, Gabriela Secretary General, who led protesters outside the DFA.

The protesters criticized the DFA statement that it will send a diplomatic note to the US to request Pemberton’s handover, but it does not necessarily mean that the US will agree to it.

The Gabriela leader said that the Aquino government “should have learned from the case of “Nicole,” the Filipina who was raped by American sailor Lance Corporal Daniel Smith, who was part of the joint military exercises under VFA.

“The EDCA will increase the number of rapists and killers like Smith and Pemberton. They will be in each and every area where US troops will be allowed to stay, not just for a ‘visit’ but even for a much longer tour of duty. EDCA’s future must be put on the line after this incident,” Salvador said.