You Are Here: Home → 2014 → November → 17 → Testimony for UCCP for Del Salvador, Justice for AJ, Justice for Lacub Campaign

“Your father was no doubt Abra’s man. There is so much Abra in him and Abra has so much of him. When the time comes when you get to visit the place, hug the people tight — they loved your father in a way no one among us can love him. They loved him because he was one of them, fought for them, lived his life like them so they could change their lives for the better.”

Warm greetings to everyone!

Perhaps many among you are wondering why I, a spouse of a member of the New People’s Army, am standing right before you today especially that the organization to which my husband belongs to is being branded as a terrorist group by the government of the Republic of the Philippines, considered as an enemy of the state, projected as extortionists, and believed by those who don’t have any knowledge about them as a bandit group. My husband, Arnold “AJ” Jaramillo aka Ka Mando had been charged by the military as the highest in command, the Secretary of the Party Committee of the CPP-NPA in the province of Abra.

I have gathered enough courage to stand before you today for 2 main reasons:

One, in behalf of our family I would like to seek your support in our quest for justice for my husband AJ, not for the reason that he was killed in an alleged encounter with the AFP (if it was indeed a legitimate encounter as what the military claims it to be) but to pursue justice because we believe his rights as a combatant were violated by the Armed Forces of the Philippines.

Secondly, I believe that it would also be an injustice for my husband AJ if I remain silent and disregard malicious allegations by the military about him. The military stated that at the time he was killed, he was “conducting extortion activities and recruiting the youth in the villages of Abra to become terrorists”. This is also one of the reasons why I took courage to face you today. It is to stand by my husband’s integrity as a person as well as speak in behalf of the people whom he lived with, worked and fought for during the past 14 years when he was among the people of the most marginalized and depressed communities in the Cordillera. My husband AJ was a man of convictions who stood by his beliefs– a person who dedicated half of his life and subsequently sacrificed it working for a better future for the Filipino masses most especially children.

My husband together with 6 other members of the New People’s Army and 2 civilians were killed in what the AFP claimed was a firefight between the Agustin Begnalen Command of the NPA and the 41st IB of the Philippine Army in Lacub, Abra on September 4th this year. 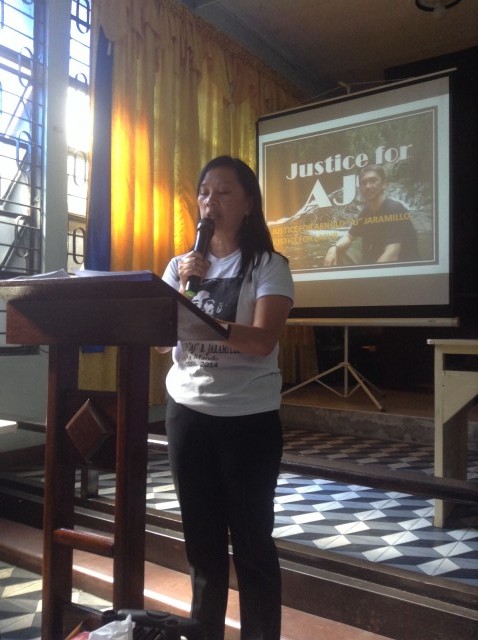 The AFP claimed responsibility for his death and the statement of its Northern Luzon Command in the days following this incident declared, “It’s confirmed he was among the slain rebels. We scored big in this particular encounter against the NPA.” For many years, the AFP had been wanting to “neutralize” my husband no matter what the costs may be. They had put a price on his head. Because of this, my kids and I had been subjected to surveillance and harassments; our families had been put under a lot of pressure to make him surrender.

Although our family had always prepared ourselves about the possibility of AJ’s death because of the path he took, when this incident happened, we found ourselves not really ready to confront the reality that we had lost him. So when the news came that he was one among the casualties during the military operations in Lacub, Abra, it still came as a shock to us.

But it was not actually his death that outraged us, it was the manner by which he was slain.

After, we sought assistance from the National Bureau of Investigation (NBI) to conduct an autopsy procedure on AJ because of unusual wounds and marks all over his body, we finally got the report which presented proof that AJ could not have died from a fire-fight since all bullet entries were from behind, at his back and one particular gun shot wound was fired close range probably by a high powered firearm. His entire body was riddled with bullets including his extremities. The doctor said that his body was not able to absorb the formalin which the embalmer tried to infuse on him since his internal organs were macerated or sponge-like (durog na durgog). Although his face appeared intact when we saw him, further examination showed that his lower and upper jaws were shattered and these were found including parts of his teeth already on his throat, so the embalmer had to put cement to keep the structure of his mouth in place.

If rules of engagement in armed conflicts were followed then AJ should have been given immediate medical attention and treated as a Prisoner of War (POW). But he was not given what was due him. Instead those who got him made sure that he was not only killed but they also mutilated and desecrated his body.

If what transpired between the AFP and the NPA on that day was a legitimate encounter, then our family would not be raising his death as an issue given the path he had chosen in life. But there were clear violations committed in the conduct of war by the AFP, thus they must be made accountable for their crime.

Who could imagine the kind of people capable of doing such acts of monstrosity. Apparently, the 6 other comrades of AJ together with the 2 civilians seem to have suffered the same fate. Furthermore, there were similar reports of desecration of bodies on similar incidents like the TINEG 8 in the province of Abra in 2011 again committed by the 41st IB. In these contexts/situation, I ask you, who are then the terrorists?

The second reason why I am here is that I need to share on how AJ was as a person and also speak in behalf our voiceless compatriots in the marginalized communities where “Ka Mando” lived and worked for many years. These are the people who really saw and experienced how he was, what he stood for and how he actually lived his life. After the death of AJ, many people approached me and other members of our family. Many were total strangers. They shared with us how they have come to greatly appreciate, genuinely admire and care for my husband, that they said that he was a noble and a respectable person, someone who helped them in their daily living and in their struggles as a community. They shared stories on how he cared about their children, always finding time to play with them, teaching them songs despite his busy schedules. He assisted them in their economic activities, planting with them in their “Payaos” or rice fields. Together with his comrades, they said that he helped raise their awareness about various issues, assisted them in increasing their capacity in production, helped out in raising the literacy level of the people especially in subject areas of science and math since he believed that these are important in building an alternative society. He encouraged them to fight for their individual and collective rights as a people, and was with them in setting up alternative structures of governance.

A letter we received during AJ’s wake from someone who was able to follow his life reveals how people regarded AJ in the villages that he was able to reach. Let me quote part of the letter which the person specifically wrote for our 2 kids. She said:

“Your father was no doubt Abra’s man. There is so much Abra in him and Abra has so much of him. When the time comes when you get to visit the place, hug the people tight — they loved your father in a way no one among us can love him. They loved him because he was one of them, fought for them, lived his life like them so they could change their lives for the better. When he died, some houses closed some rooms permanently; they said in the dialect “that place is only for Ka Mando.” These were the rooms he used for office work when he had to write. The Tingguians believe the barrios are forever positively haunted by his spirit.

So if this is how my husband was regarded by the people whom he served, who would tell me that he was indeed a terrorist and an extortionist? Do we really think that terrorists and extortionists would be given such honor by the people? Let the people speak. Those who killed AJ have no right to label him or his comrades as such because in the eyes of the masses whom they dearly served, those whom they are labelling as terrorists are for them their heroes. On the other hand, the AFP nor the state don’t have any moral ascendancy since the people believe that they are part of those maintaining the system that is perpetuating their oppression as a people. The reason why AJ in the first place decided to take the path less travelled, to take up arms and live and work among the masses in the countryside is precisely to dismantle this oppressive system and set up an alternative structure that will genuinely benefit majority of our people.

So let us first try to seek the truth and not be cowed by labels. Let us try to study the fundamental problems in our society, analyze its root cause and find meaningful solutions for these. This way, the dream, the aspirations of those who have sacrificed their lives like AJ, Recca and the rest of the Lacub martyrs will not just be wasted and their memory just be forgotten in vain.

We are calling out loud: JUSTICE for AJ, JUSTICE FOR LACUB!
Maraming salamat po.