“Most of these fees are questionable, exorbitant, redundant and dubious.” – Rise for Education

MANILA – Students under the banner of Rise for Education (R4E) Alliance trooped to the main office of the Commission on Higher Education (Ched) on Nov. 26, Wednesday, calling for the junking of “other school fees.”

In an eight-page letter complaint, the R4E asked the Ched to stop the collection of “other school fees,” which, the group said, are “one of the barriers to accessible and affordable education for Filipino students.”

Sarah Elago, convener of the R4E and current national president of the National Union of Students in the Philippines (NUSP) said other school fees (OSF), aside from tuition that are being collected by universities and colleges, both private and state-run, hinder students from having access to education. They characterized these fees as “exorbitant, dubious and redundant.”

“Through the years, OSF actually surpass the cost of tuition in all universities and colleges in the country with fees ranging from P1,000 ($22) to as much as P25,000 ($556). Even state universities and colleges (SUCs) charge exorbitant and dubious fees, such as the illegal developmental fee, that did not undergo genuine student consultation,” Elago added.
The R4E listed several fees that are currently being collected by majority of tertiary schools in the Philippines on top of the tuition. 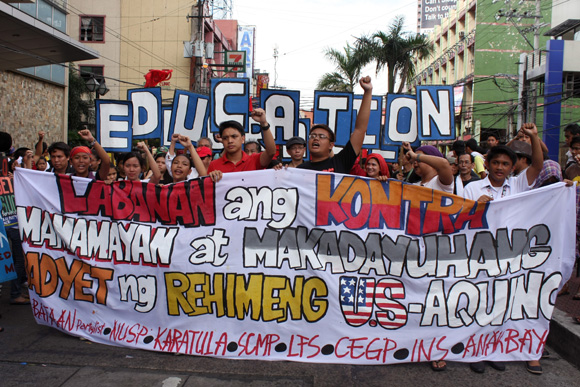 The group’s complaint said, “Most of these fees are questionable, exorbitant, redundant and dubious, revealing a great deceit to students and parents. School expenses that should have already been covered by tuition are being passed on to students through charging of other fees such as the testing and exam supplies fee.”

“Tuition as the fee of instruction that is paid per unit load of a student should already cover everything that is related to instruction i.e. syllabus development, testing and exam fees. Enrollment costs, which are part of a school’s operations, are also passed on to students through registration and matriculation fees. There are schools that offer an installment plan and charge an additional installment fee for it.”

The group added, “Laboratory fees also present a big blow each and every semester as these are collected per subject apart from the tuition per unit. There are also cases when an air-conditioning fee is charged if a laboratory has an air conditioning/cooling system.”

The students condemned Ched’s “pro-commercialization” stand and “for being a mere stamp pad for the increase of tuition and other school fees.”

On Nov. 25, Tuesday, the R4E submitted a 37-page position paper to the Office of the Ombudsman to back their complaint against Ched Chairwoman Patricia Licuanan and some Ched officials for their inaction on the students’ complaints filed between March 18 and April 1.

The R4E alliance filed the complaint with the Ombudsman in June.

“In this position paper, we included more details on how Ched’s actions constitute a grave injury on our part. Our lawyers explain that once all the submissions have been studied by the Ombudsman, a decision will be promulgated soon,” Elago said.

The NUSP and representatives from students councils of different schools have filed complaints with Ched against schools for violation of Ched Circular Memorandum Order No. 3 series of 2012.
Among the schools that were the subject of complaints were: National University, De La Salle-Araneta University, Far Eastern University, University of the East in Manila and Caloocan, San Beda College and Far East Air Transport Incorporated (FEATI) University.

The CMO No. 3 guarantees that proposal for increases in tuition and other fees by state universities and colleges and private higher education institutions (PHEIs) will go through a process of consultation with the students. But the student alliance said most of the consultations held were bogus.

The student complainants also said that the Ched should pay P10,000 to P15,000 each to student leaders Vincent Sudaria and James Bryan Deang as damages.

Deang is a former scholar of National University and President of the NU Supreme Student Council who lost his scholarship for actively opposing the increase in tuition and other fees in their university. The administration removed Deang from the list of scholars for academic year 2014-2015.

“Ched’s action shows that the only thing that they regulate is the steady flow of profits for schools. This orientation of Ched shows the neoliberal framework of further commercialization of education under the Aquino administration,” Crisostomo added.