“Skyrocketing tuition increase under the guise of ‘development’ actually kills students’ and youth’s right to accessible and quality education.”

MANILA – After the recent increases in oil prices, MRT-LRT fares, water and electricity rates, now it’s the cost of private education. This coming academic year (AY) 2015-2016, 400 universities and colleges intend to increase their tuition and other fees.

The Tuition Monitor Network of the National Union of Students of the Philippines (NUSP), the broadest alliance of more than 650 student councils/governments and federations in the country, said the proposed tuition and other school fees increase range up to 13 percent.

“But this may change as reports of increases are still pouring in,” the students’ group said in a statement. The group added that most of the schools that increased last year have again proposed another round of increases and imposition for the coming academic year.

Meanwhile, at the University of the East-Caloocan, student leaders who oppose tuition increases decried harassment. 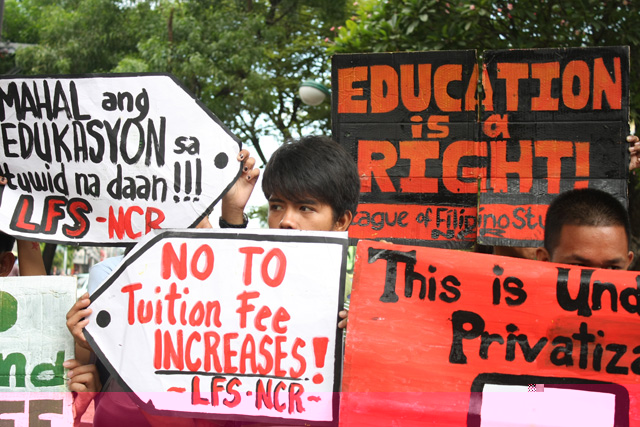 Matibag’s identification card was confiscated and was ordered to leave the school premises because he was identified as leading the students opposing the tuition hikes. “This is a clear case of political harassment on students who are exercising their freedom to dissent,” the group said in a statement.

The League of Filipino Students (LFS) denounced the UE administration for harassing student leaders during the consultation. UE is set to have a five percent tuition increase for the next academic year, citing inflation rate as basis for the increase.

In order to railroad the tuition increase, they went as far as detaining student leaders and posing threats on the academic standing of students to force them to attend the tuition consultations,” she said.

Student consultations for tuition increase are held every February in accordance wit the Commission on Higher Education Memorandum Order (CMO) No. 3, series of 2012. The said memo states guidelines for the imposition of new and higher fees. This memo also requires schools to hold consultations among students on the impending hikes before passing their proposal to Ched.

The NUSP documented several cases of harassments against students who fight for their right to education. Last year, at the National University, James Deang’s scholarship was terminated due to his staunch stand against tuition and other school fees imposition in their university. Deang was the outgoing President of the National University Supreme Student Council (NUSSC) at that time.

At the Eulogio Amang Rodriguez Institute for Science and Technology (EARIST), Manila, a number of student leaders were blacklisted from enrolling because they joined the massive student walkout against the school’s collection of the illegal development fee.

The NUSP slammed Ched for failing to do its duty. During the Committee on Higher and Technical Education (CHTE) forum on tuition and other school fees at the House of Representatives on Feb. 16, Ched Executive Director Julito Vitriolo insisted that other fees such as energy and development fees are banned in all schools and the collection has already stopped.

Sarah Elago, national chairwoman of the NUSP and convener of the Rise for Education Alliance said that these fees still exist and continue to burden the students and their parents.

“This shows how blind the Ched is to what is really happening in many schools. There are many schools that are implementing and collecting such fees. The letter-complaint that we filed three months ago is proof that schools are indeed collecting exorbitant and redundant other school fees,” she said.

“Administration-sponsored consultation for the longest time has evolved into a mere justification and presentation of fees,” Elago said. “Skyrocketing tuition increase under the guise of ‘development’ actually kills students’ and youth’s right to accessible and quality education.”

Youth and students groups, meanwhile, declared National Walkouts on February 27 and March 13 as National Days of Action against Tuition and Other School Fees Increases. NUSP member-councils and organizations are currently boycotting administration-sponsored consultations as these are “bogus, pro-tuition increase, and undemocratic.”

NUSP’s member-councils and organizations are also holding “genuine student consultations” and are procuring signatures for their manifesto of unity against tuition and school fees hikes.