How Carmen Deunida fights her battles, and always wins

“Nanay Mameng, isang dula” is sure to win your heart with the life story of the iconic urban poor leader.

MANILA — In less than a year since the first musical production on her life, a new play of the same title is currently being staged to celebrate the life and struggle of Carmen Deunida, an icon in the national democratic movement in the country. 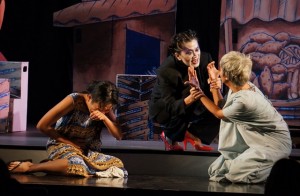 Deunida, more commonly referred to as “Nanay Mameng,” is one of the most celebrated urban poor activist in the Philippines. She hailed from an urban poor community in Pasay City, where she became a staunch icon in their fight not just against demolition but also for genuine change.

Though she became an activist during the time of strongman Ferdinand Marcos, Deunida became a household name during the rallies to oust President Joseph Estrada. In protest actions, she would undauntedly insult presidents, not for the heck of it but to point out how the government has not served the interest of the poor.

But Deunida is not always the tough urban poor activist many Filipinos know.

The new play, Nanay Mameng, isang dula, directed by Noel Taylo and Edwin Quinsayas, showed the other side of Deunida — her weaknesses, some may call it.

It courageously tackled how she faced and overcame domestic violence, how she dealt with the pain of losing her two children, her frustrations in the shortcomings of her neighbors when they were fighting against demolition, among others. Yet, the play also shed light on how she drew inspiration from all these hardships, all her weaknesses.

Tess Dioquino and Tao Aves, who played the elder and the younger Deunida, respectively, captured the urban poor activist’s wits.

Jennifer Dabu, the play’s understudy for “Sakit,” stole the thunder with her witty lines, making the audience roll with laughter.

But more than the life of Deunida, the play also depicted the struggle of the urban poor and how, over the years, they have remained at the fringes of government priorities. It showed how despite promises of the government to deliver social services and to push for so-called developmental projects, many Filipinos live below poverty line.

They are either unemployed or endure harsh conditions in low-paying jobs. They face threats of demolitions and the possibility of being thrown to far-fetched relocation sites, where a decent livelihood is hardly possible.

The play did not romanticize the urban poor. It presented the harsh truths: there are informal settlers who are involved anti-social activities or those who betray their fight for their right to housing. But it also showed their perseverance, their dreams and their collective struggle for a genuine change.

The play can evoke a range of emotions — from anger to joy to sadness. Writer’s note: make sure that you have a tissue or handkerchief in hand.