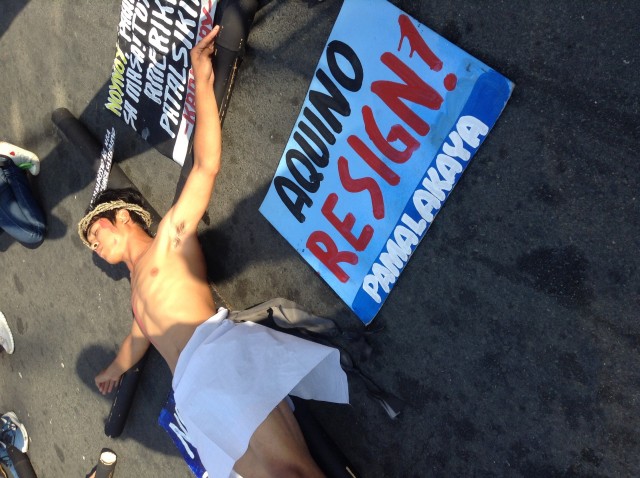 “End the calvary of the people. Aquino should resign.”

MANILA – Members of progressive groups trooped to Mendiola in a “Lenten-inspired” protest to call for President Aquino’s resignation today, Mar. 30.

“End the calvary of the people. Aquino should resign,” protesters chanted.

“Aquino as the Pontius Pilate of the urban poor has subjected us to deeper poverty. He is proudly talking about the economic development which his administration allegedly achieved but he has done nothing to improve the lives of poor Filipinos. He is very good in absolving himself of the sins against the poor,” Carlito Badion, secretary general of Kadamay, said.

Protesters began their march from Plaza Miranda to the foot of the historic Mendiola bridge.

Among those who joined today’s protest were residents of the Parola compound in Manila, whose homes were razed in a fire earlier this month.

Teodulo Billeza, 56, told Bulatlat.com that his story was like that of any other Filipino who left their provinces due to lack of decent livelihood. They left for Manila, and, like many others before him, urban poor communities became his refuge.

“Our life and livelihood is in Divisoria. If I am not working as a carpenter, you would find me in the streets of Divisoria, working as a porter. I would earn roughly P300 for working from 9 p.m. to 2 a.m. the following day,” he said.

Their life, however, was disrupted when a fire razed their community, destroying homes of thousands of urban poor families. Local government officials told them to accept their relocation offers to either in the province of Cavite or in Bulacan.

But Billeza found nothing promising of the government’s offer.

“What would be left of our income if we would spend half of it for our fare?” he said, “This is why I joined today’s protest, hoping that Aquino would heed our call.”

He also doubted if the fire was an accident as their community is currently facing demolition threats. He added that firefighters did not appear eager to put a stop to the fire and has seemingly allowed it to raze their homes to the ground.

Urban poor group Kadamay said that the National Housing Authority has constructed 49,640 housing units, where at least 94 percent is located in far-flung relocation sites. These relocation sites have long been criticized for having no access to basic social services.

There are at least 70,000 families or 350,000 individuals who were evicted from their homes as part of the implementation of various public-private partnership programs in the National Capital Region alone.

“From the violence during these demolition of homes to the hellish situation in the off-city relocation sites, Aquino has unraveled himself as a quintessentially anti-poor president,” Badion said, adding that the president prioritizes the interest of the foreign businesses and ruling local elites.