‘Union is workers’ potent weapon vs attacks on wages’ — KMU 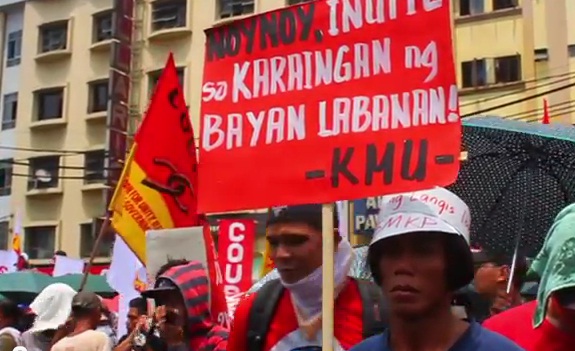 Less than one in every ten wage and salary workers in the Philippines belong to a union. And of these few unionists, even fewer, only 12 percent, have collective bargaining agreements, which give them slightly better wages and work condition than those prescribed by law.

MANILA – Five years into his six-year term, President Benigno “Noynoy” Aquino earned the title of “No. 1 violator of workers’ rights,” the unionists from Kilusang Mayo Uno (KMU) said in their picket in front of the Department of Labor and Employment this Friday. The labor group said Aquino has presided over massive layoffs of workers trying to form unions and responded to workers’ strikes with either inaction or repression.

Doods Gerodias, KMU deputy secretary-general, cited cases and figures showing Aquino’s anti-labor and anti-union acts. He said the Philippine government under Aquino has failed to comply with the conventions of the International Labor Organization guaranteeing workers’ rights to form unions and hold strikes – the latter being an essential part of workers’ right to collectively bargain.

But from latest government data, less than one in every ten wage and salary workers in the Philippines belong to a union. And of these few unionists, even fewer, only 12 percent, have collective bargaining agreements, which give them slightly better wages and work condition than those prescribed by law. Their number is apparently kept low because workers trying to form a union were unjustly being dismissed on the job, or discriminated against, according to the non-government Center for Trade Union and Human Rights (CTUHR).

If the unionists were not illegally dismissed on the job, they were being blacklisted or maligned. CTUHR cited the case of workers in Takata Philippines Corporation in Laguna Technopark. During workers’ orientation in Takata, it reported that the management would show photos of leaders and active unionists whom they want the newly-hired workers to avoid. Some contractual workers who approached the union in Takata were also dismissed by the company, said the CTUHR, adding that Takata also discredits the unionists in its sponsored fora. Takata is a Japanese company supplying car makers with airbags.

The KMU members who picketed the labor department this Friday are themselves examples of union-busting under Aquino. These workers said they were illegally laid off for having formed unions but their subsequent protests and strike were routinely ignored by the Labor Department. They launched their respective strikes against union-busting in Pentagon Steel Corporation (April 2013), Express Coats (March 2014), Janrey (March 2014) Golden Fortune Construction (December 2014), and Long Hong Recycled Plastics (March 2015).

The unionists from construction company Golden Fortune Techno Built Inc, owned by businessman Dominador Yap, told Bulatlat.com in previous interviews how, last December, 70 from their members marched to the labor department to protest non-payment of their wages. The workers said they have been with the company for years, working in various building projects, some 45-storeys high, wherever the company has contracts. Since they succeeded in forming a union in August last year, their members were dismissed by the company in different batches. They spent Christmas last year battling harassment and mosquitoes in a picketline at Dasmariñas Street in Manila. Dominador Yap is related to tycoon Lucio Tan by marriage.

Lucio Tan himself has been a huge example of union buster according to various labor groups. In Philippine Airlines (PAL,) which he owns, he has implemented a massive dismissal and contractualization scheme.

In 2010 when President Aquino started his term, there were up to 4,000 remaining regular workers in PAL. This year, they have been reduced to just over 900. The infamous CBA suspension first headlined in PAL in 1998 continued to this day even after it was supposed to have ended in 10 years.

Some of the retrenched workers became contractual workers or non-regular workers receiving lower wages in third-party service providers to the airline.

“Unions are essential to democracy, and it is telling that the Aquino government has been preventing more unions from being formed,” Gerodias of KMU said during their picket at the labor department. The labor leader vowed that despite the Aquino government’s “repressive measures,” they will pursue unionism because it is their most potent weapon in defending their rights, and fending off “attacks on wages, job security and union rights.”