“Why is she the one who will be made to suffer while those who orchestrated the trafficking and fooled her into unknowingly transporting the illegal drugs are still out there continuing their criminal activities?”

MANILA – For Filipino-American Ruthie Arroyo, the case of Mary Jane Veloso, a Filipino sentenced to die in Indonesia, brings to mind her mother, aunts and all the women in her life who were forced to migrate in order to survive.

“We cannot endure another Flor Contemplacion; it has been 20 years since her execution in Singapore. Has the Philippine government not learned from its mistakes and the deaths of its people? We must save the life of Mary Jane Veloso and fight to make sure that this labor export program comes to an end,” Arroyo, who is based in New Jersey, said in a statement.

Contemplacion was a Filipino domestic helper executed in Singapore back in 1995.

Filipinos migrants in various countries have called on the Indonesian government to save Veloso from execution. They held protest actions in front of Indonesian embassies and even in their work places as they join the mounting last-ditch efforts to save Veloso.

Veloso, a victim of human trafficking, was arrested in Indonesia back in 2010 for reportedly carrying 2.6 kilograms of heroin, stitched to a luggage bag that her recruiter lent her. Only six months later, she was sentenced to die. The Indonesia government has yet to look into the appeal for executive clemency, which the Philippine government submitted back in 2011. Its court, on the other hand, has recently denied the petition for judicial review.

Migrante International, the largest OFW group, has earlier assailed the Philippine government for failing to provide Veloso a lawyer during her trial and a duly-accredited translator.

Veloso’s case was kept from the public until recently. Her case, said Tess Agustin, chairwoman of Migrante Canada, would have been “hushed down by the Philippine government” if it were not for the international criticism that accompanied her fellow foreign inmates’ case.

“Every day, almost 5,000 Filipinos leave the Philippines in search of work to lift their families out of poverty. The majority of those leaving are women,” said Cole Carothers of Gabriela New York, adding that Veloso is no different as she, too, “was searching for ways to support her family to survive.”

Carothers, who joined the protest in front of the Indonesian consulate in New York last Apr. 8, urged fellow Filipinos not to treat Veloso’s case as an “isolated” one. There have been seven Filipino migrant workers who were executed under Aquino – the biggest number under one administration.

Janella Lopez of Anakbayan New York said Veloso’s case is “one too many.” 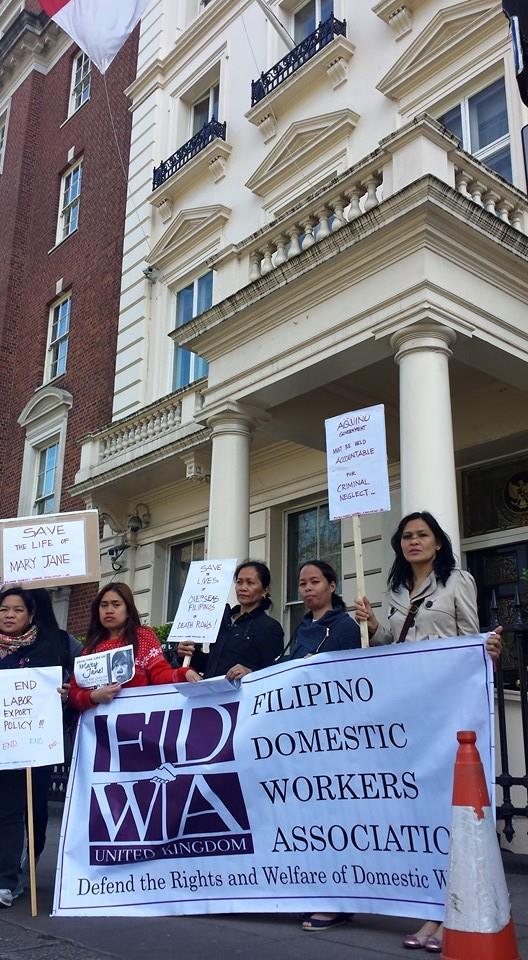 “As sons and daughters of migrants, we understand that Mary Jane Veloso migrated to work in order to feed her two children. We understand that forced migration is the reason why we exist as Filipino Americans. We understand this because our own families were forced to migrate here to find better lives that they did not have in the Philippines,” Lopez said.

Meanwhile, OFWs based in Hongkong and in Macau said Veloso’s case exposes the “vulnerability of Filipino workers abroad to forces that capitalize on our desperation due to the lack of decent livelihood, opportunities and hope in our home country.”

“Why should Mary Jane Veloso die for merely wanting to have an honest work that could support her family? Why is she the one who will be made to suffer while those who orchestrated the trafficking and fooled her into unknowingly transporting the illegal drugs are still out there continuing their criminal activities?” an open letter to President Aquino, signed by at least 53 Filipino organizations in Hongkong and Macau, read.

Arroyo, for her part, said Veloso is a victim of both the large-scale international drug syndicates and Philippine government “whose biggest export are its people,” adding that the country’s education system has been configured to produce “export-ready” youth, an apparent reference to the K+12 program in the country.

“From the accounts of Mary Jane’s family, their repeated appeals for help from the Department of Foreign Affairs (DFA) were only met with indifference and inaction. Only in the past few months did the Philippine government hire a lawyer to appeal her case – almost five years since her imprisonment and trial started,” the letter further stated.

OFWs in Hongkong and Macau reminded the Aquino government that there are more Velosos in other countries.

Migrante Middle East, for its part, condemned the criminal neglect of the Aquino government to OFWs in distress.

John Monterona, regional coordinator of Migrante Middle East, told Bulatlat.com that as in the past, OFWs and migrant rights organizations should “move heaven and earth to halt the execution of OFWs,” adding that most are innocent and are mere victims of a flawed justice system that deprived of their right to a fair trial.

Carothers added, “we must hold President Aquino accountable for the safety of our people at home and abroad.”