Based on world market trends, fuel energy available to power producers now cost more than 50 percent lower. As such, the Malampaya shutdown “clearly should not result to additional costs, and thus, (there is) no basis for any power rate hike.”

MANILA – Metro Manila workers protested the latest drain in their “measly wages” as Meralco announced higher power rates this April and most likely also in May. While the government-formed Trade Union Congress of the Philippines has been pressing the country’s lawmakers to spend Malampaya funds to cover the scheduled power rate hikes, groups affiliated with All Worker Unity (AWU) continue protesting the said hike in power rates citing its baselessness.

Meralco has announced P0.27/kWh increase on generation and other charges for April. It blamed the hike on the maintenance shutdown of the Malampaya gas field. Like in the past when it cited the shutdown as the cause of higher rates – because the power plants supposedly resorted to using more expensive fuel – the increase is being passed on to consumers again.

But the said hikes have previously been questioned by the Makabayan bloc of lawmakers in Congress who said the hike lacks basis. Colmenares took the Energy Regulatory Commission to task last week for what amounts to the agency’s dereliction of duty.

“It appears the ERC will just take this sitting down,” Colmenares said, referring to ERC’s inaction on the protested rate hike, a trend which, he said, the ERC has already shown before. Colmenares said the ERC has not yet released the long-awaited “collusion report” on the 2013 Malampaya turnaround.

In January and February of 2014, Meralco jacked up the cost of its power in historically unprecedented rates citing the higher cost of generated fuel as a result of the Malampaya shutdown. But a scandal broke out suggesting that power rates went up allegedly due to insider trading.

Meralco’s announced hike for this month and perhaps for May also cite the same excuse for the unprecedented hike that was stopped by public protest, and expected to be the subject of ERC’s still unreleased report.

“This is a very questionable increase considering that they are saying that it is due to the Malampaya shutdown,” Colmenares said. He added that until consumers find out if the proposed rate hikes are not artificially created by power players like in 2013, there should be no rate hike.

In Manila, workers accused Meralco and the power generating companies of “basically stealing food from the workers tables.” The AWU also expressed disbelief of Meralco’s cited reason for the hike. It said it is simply a profit-driven power rate hike.

Rate hikes this summer have somewhat been guaranteed by the Energy department, which has started last year to bat for emergency powers supposedly to cope with projected power shortage especially this summer. The crux of the matter is that it is asking for funds to spend on emergency additional sources of power – but consumer groups and the Makabayan lawmakers questioned the “phantom energy shortage” on which the demanded funds and emergency power are based.

Now Meralco and the Department of Energy (DoE) are citing increased summer demand supposedly reaching 9,000 megawatt (MW), which power plants have to respond to or risk blackouts amid the scheduled Malampaya shutdown. But Bayan Muna Rep. Neri Colmenares in previous statements have disclosed that the DoE’s demand and supply data for April 2015 have said the country’s peak demand amounts to just 8,290 MW.

When AWU stormed Meralco’s business offices in España, it also said that based on world market trends, fuel energy available to power producers now cost more than 50-percent lower. As such, the workers group said, the Malampaya shutdown “clearly should not result to additional costs, and thus, (there is) no basis for any power rate hike.”

AWU spokesman Rea Alegre condemned the Aquino government’s promptness at “defending those profit-driven monster corporations” and at the same time, being “totally deaf” to the workers’ demand for a national minimum mage of P16,000 (US$360) monthly.

Citing how big corporations such as the conglomerates behind Meralco and power generating companies are increasing their profits at the expense of the wages of working people, AWU called on the public and all workers and employees to support and join their campaign for P16,000 national minimum wage. 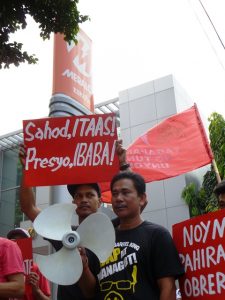 Alegre said the highest NCR wage rate of P481/day is not even half of the family living wage of P1,086 per day ($24) or P32,580 ($732) per month based on Ibon Foundations 2014 research. Meanwhile, she said, the bosses behind business groups bleeding the workers dry are making their presence felt in the Forbes Filipino Billionaires’ list.

Colmenares said they will challenge the basis of this latest round of Meralco power rate hike at the Energy Regulatory Commission (ERC).

“The similarity of the situation then and now is very apparent and we demand for more transparency and less of the greed of the power industry moguls,” Colmenares said.

Workers groups have noted how, during the hearing for the Energy department’s requested emergency power, it became apparent that the Energy Regulatory Commission does not even inspect power facilities or investigate what protesters consider as suspicious brownouts.

“We are now working on our petition to challenge the power rate hike at the ERC to protect consumers. We are also reiterating our call for the repeal of the Electric Power Industry Reform Act (EPIRA) and return the industry sector under full state regulation,” said Colmenares.

EPIRA, he said, also made possible these rate increases amid lack of transparency. He warned that if we let this continue, then power rates will always increase especially during the summer months and as the population increases.