You Are Here: Home → 2015 → April → 21 → Green groups to bring cases of slain environmentalists to intl tribunal 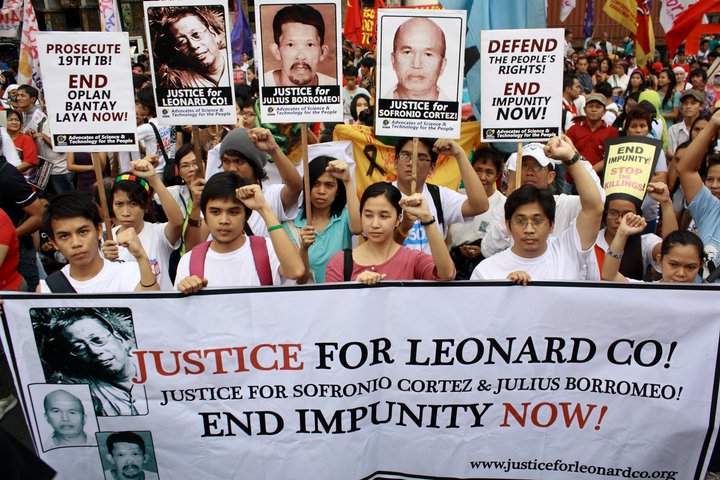 “If our justice system will continue to serve as a tool of repression that has made environmentalists into an ‘endangered species,’ then it leaves us no other recourse but to seek justice in higher venues of struggle.”

MANILA – Lambasting the Aquino administration for sitting on the cases of their slain colleagues and “promoting impunity,” environmentalists said they have filed some of these cases for trial before an international tribunal in July.

Feny Cosico, secretary general of the Advocates of Science and Technology for the People (Agham), said that among the cases they have filed in the 2015 International People’s Tribunal (IPT) are those of the killing of botanist Leonard Co, the illegal detention and trumped-up charges against physicist Kim Gargar, and the Lacub killings which include NGO worker and engineer Delle Salvador.

The IPT, to be held in Washington DC, USA on July 16 to 18, will try President Aquino and US Pres. Barack Obama for human rights violations.

Groups led by the Kalikasan People’s Network for the Environment (Kalikasan PNE), Agham, Hustisya! and the TF-JED, decried the continuing impunity in a picket on April 20 at the Department of Justice, two days before Earth Day.

“Five years of inaction over the various outstanding killings of environmentalists have set a precedent for normalized violence towards people and communities who are justly struggling to defend their lives, environment, and access to resources,” he said.

The TF-JED said that a total of 83 environmental defenders have been killed from 2001 to the present. Of this number, 47 were killed in the five years under Aquino, while there were 36 in the nine years of the Arroyo regime.

As of November 2014, the human rights group Karapatan had documented 226 victims of extrajudicial killings under the Aquino administration.

“If our justice system will continue to serve as a tool of repression that has made environmentalists into an ‘endangered species,’ then it leaves us no other recourse but to seek justice in higher venues of struggle,” Dulce said.

“The IPT is one such venue where the peoples of the world can be the judges who will not allow themselves to be cowed by the wheeling and dealing of corrupt and tyrannical politicians,” he said.

Among those at the picket was Danny Monterona, whose brother Marcelo Jr was slain by suspected soldiers in Maco, Compostela Valley province in 2014.

“What they did wasn’t right,” he said. “If my brother did anything wrong, they should charge him in court, arrest him, and not kill him like that.”

Marcelo, 41, was a council member of the Indug Kautawan, the Maco chapter of Barug Katawhan (People Rise Up), the group of typhoon Pablo survivors. He had campaigned for the pullout of the Army’s 71st Infantry Battalion in the communities and for justice for Pedro Tinga, a slain Indug Kautawan member.

Speaking at the protest, Cosico lamented how the DOJ filed only charges of reckless imprudence resulting to homicide against nine soldiers of the 19th Infantry Battalion who fired and killed the botanist Co and his companions Sofronio Cortez and Julio Borromeo. She said that the survivors, Roniño Gibe and Policarpio Balute had testified how the soldiers kept on shooting at them, in spite of their pleas.

The DOJ is yet to issue a decision on a petition for a review of the case, filed by Co’s wife, Glenda, Cosico said.

Cosico also cited the case of scientist Kim Gargar, who continues to be charged with attempted murder and frustrated murder, illegal possession of explosives and violation of Comelec gun ban. Gargar, who was freed on bail last year, continues to be harassed with the false charges, and threatened to be filed with new ones.