Campaign to save Mary Jane Veloso not yet over — lawyers

Migrante International challenged Aquino to recall its diplomats in Jakarta, disapprove or suspend any Indonesian company’s application for investment and to bare the list of all Filipino migrant workers who are either languishing in jail or on death row. 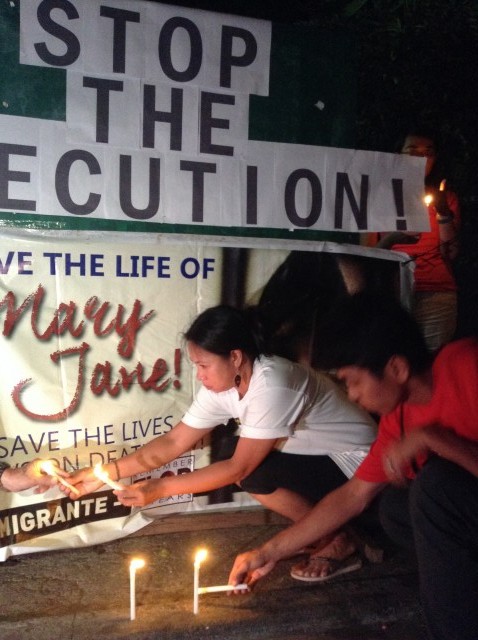 MANILA – “It does not look good but it is not over.”

This is how Edre Olalia, secretary general of the National Union of Peoples’ Lawyers, described the handing of the mandatory 72-hour notice of execution to Mary Jane Veloso. The strong political actions to appeal for Mary Jane’s life, he said, make a substantial difference compared to other nationals on death row.

The Veloso family received a call from Mary Jane, herself, at around 5:30 p.m. to inform them of the notice served to her. She is scheduled to be executed on April 28.

“As lawyers, we appeal to (Indonesian president Joko) Widodo to give us a chance. Why the rush?” he said.

Olalia, who is head of the Filipino pro bono lawyers of the Veloso family, said that while they are not abandoning the legal proceedings, there must be a shift in putting to task the Aquino government, especially since Mary Jane’s father was once worker at the president’s family’s estate, the Hacienda Luisita.

Mary Jane was sentenced to die back in 2010 in Indonesia for allegedly carrying 2.6 kilograms of heroin, stitched to the linings of her luggage lent to her by her recruiter. Her case was only known to the public last month.

On the second judicial review

Ephraim Cortez, NUPL assistant secretary general for legal services, said the petition for a second judicial review would continue as it would run independently from the carrying out of the death penalty.

The NUPL has earlier stated that carrying out the death penalty is a political not a judicial act.

The second petition for a judicial review were based on the grounds that Mary Jane is a victim of drug and human trafficking. In a meeting with the Philippine embassy-retained Rudyantho and Partners lawyers, the NUPL found out that the Indonesian lawyers has long called on the Philippine government to investigate these issues as it could be used as a ground for their first appeal.

Officials of the Philippine Drug Enforcement Agency (PDEA), however, only visited Mary Jane to get her account last March 29. The Bahasa version of the sworn statement she executed during the said visit was only handed to her Indonesian lawyers a day before the filing of the second petition for judicial review.

“What did (the PDEA) do between April 7 to April 24 when there was a temporary reprieve?” Cortez said, referring to the temporary stay of all executions during the Bandung Conference.

Cortez said they are not familiar on how fast the Indonesian Supreme Court could look into the petition, let alone make a resolution. But, he added, that the earliest that their justices would reconvene is on Monday, Apr. 27, a day before the scheduled execution.

He said that if the Indonesian Supreme Court would issue a favorable decision on April 27, it may or may not sway Widodo’s decision to execute Mary Jane.

At this point, Cortez said, the pressure should come from no less than President Aquino, who, so far, has not made any public pronouncement on the said issue.

Garry Martinez of Migrante International said Aquino should speak up. He said that since Mary Jane’s case was brought to public attention, he has never uttered a word on it.

“We might lose a life of an innocent Filipina all because of the government’s criminal neglect,” he said.

Cortez reiterated that the Philippine government did not provide Mary Jane a lawyer during the crucial stages of her arrest – from immediately after the arrest to the trial stage. The Philippine embassy in Jakarta retained the legal services of Rudyantho and Partners during the appeal stage of Mary Jane’s case, when she was already sentenced to die.

“If they did their job right, Mary Jane would not be where she is right now,” Martinez said.

The migrant leader challenged Aquino to recall its diplomats in Jakarta, disapprove or suspend any Indonesian company’s application for investment and to bare the list of all Filipino migrant workers who are either languishing in jail or on death row.

These demands were earlier posed by other foreign governments whose nationals may be sentenced to die along with Mary Jane.

Olalia, who is currently in Yogyakarta with the Veloso family, said the two children were the most affected. Earlier today, the Veloso family was allowed to see Mary Jane whom he described as “incredibly strong, calm and composed.”

Mary Jane’s mother Celia said her daughter even told her children to be good and that if they are naughty, “pag may naramdaman kayong malamig, ako na yun.” (they would feel her presence)

She also told her two sons to be proud of their mother, who, like Jesus Christ, was innocent but still sentenced to die.

“My daughter has already accepted it. But I refuse to accept it because I know that she is innocent,” Mary Jane’s mother told the media via phone patch during the press briefing.

Celia warned that they have so many people to hold accountable if any thing happens to Mary Jane.

Tomorrow, April 26, supporters of Mary Jane will gather in front of the Indonesian embassy for a vigil until the scheduled execution of Mary Jane.