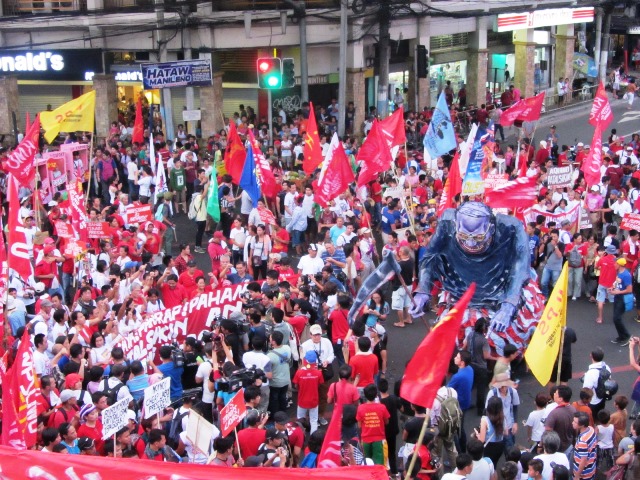 “The longer he remains there, the longer would our natural resources be plundered, our working people put at risk, our tillers denied of their land, our people denied of affordable utilities and social services.”

MANILA – President Benigno “Noynoy” Aquino III was paraded around and addressed as the Philippines’ current ‘Commandeath-in-Chief’ this May 1 Labor Day in the capital. His broad 12-foot effigy was carried along by marchers from Liwasang Bonifacio to Mendiola near Malacañang where, upon arriving, it was burned amid chants of “Noynoy Aquino, mastermind of Mamasapano, enemy of Filipino,” and “Noynoy Out Now.”

On the ashes of the Commandeath-in-Chief’s effigy, they began late afternoon of May 1 the third and last leg of the commemoration of Labor Day in the capital by the biggest unions, supporters and allies of Kilusang Mayo Uno.

This time, they tackled Aquino’s “biggest crimes” against the Filipino people.

From their speeches, these crimes included not just pushing people deeper in poverty because of his policies intensifying privatization and deregulation, which they blame for having increased prices, depressed wages, turned shoddy services into milking cows, among others. They also expressed disgust over what they listed as Aquino’s crimes of letting plunder cases involving his closest allies and members of his family to go unresolved, and his crimes against Philippine sovereignty.

Lito Ustarez, vice chairman of Kilusang Mayo Uno, said that five years under the Aquino government, the Filipino people have never had an easy life.

“The puppetry of Aquino to dictates of the United States makes the lives of Filipino people more miserable. From its neoliberal policies to the execution of Operation Plan Exodus that killed the lives of more than 60 Filipinos, we see the proofs that Aquino is not serving the interest of the Filipino people, but the interest of the United States,” Ustarez said.


In Liwasang Bonifacio they talked of wages and benefits and the attacks on it by the government and state troops, the employers and big business; in Mendiola, they talked of chronic joblessness and landlessness, political repression and persistent economic backwardness resulting from the “utak-kolonyal” (colonial mindset) leadership of the current “puppet” government.

They urged workers to form unions to fend off attacks on their wages and rights. In Mendiola, they proposed the formation of a transitional council for peace and reforms and why ousting President Aquino is just Step 1 in seeking accountability and justice for his crimes.

Pres. Aquino spent May 1 in Cebu. Activists said he avoided the protesters, but he was also met in Negros with protests. The gate to Malacañang immediately near Mendiola (now Chino Roces) Bridge was guarded by no less than three rows of anti-riot troops, two six by six loaded military trucks, a firetruck, and a block further on, there were other anti-riot troops. They were the troops immediately visible to protesters.

In welcome rotunda at the boundary of Quezon City and Manila, no less than a platoon of policemen was also seen standing on guard.

Bayan secretary general Renato Reyes Jr said the Philippines continued to have no capability in defending itself from Chinese intrusion into its territory, or from any infringement of its sovereignty by other imperialist forces, because, he said, the government mistakenly relies on the US.

“We can’t stand up to Chinese (intrusion) if we’re colonial-minded,” Reyes said. “We can’t defend the Philippines if we’re dependent on the US.”

Reyes said the state’s armed forces haven’t modernized despite years of relying on US aid. He cited the past 15 years of Visiting Forces Agreement that, he said, failed to help modernize the local troops. He said depending on US only gave the country ukay-ukay (second-hand, discarded) weapons, antiquated coast guard cutters and obsolete equipment, which the country also had to pay for handsomely.

For genuinely building up the country’s defense capability against any imperialist country’s infringement, Reyes said Filipinos have to start by ousting puppets residing in Malacañang.

‘Aquino’s puppet govt. is useless, it is us who can defend our people’

Rody Corpuz, 60, peasant leader from the Hacienda Luisita in Tarlac, said at Mendiola, the reprieve the people’s movement successfully secured for OFW Mary Jane Veloso a few days ago is proof the Aquino regime is “useless” at defending Filipinos.

“But we can defend our people even if he or she is in another country,” Corpuz said. He went on to say that President Aquino and his family are only good at asserting false claims.

Before Corpuz spoke at Mendiola, the family of Mary Jane Veloso had also disputed the Aquino administration’s claim that they were the ones who secured Veloso’s reprieve. The family belied that by recounting details of the government’s five-year neglect of her case.

According to her family, Veloso’s father had worked at Hacienda Luisita since he was 15. Poverty and joblessness prompted her to seek work abroad, but after nearly being raped in the Middle East, she came home but in search for another job. She was unwittingly used to bring a luggage lined with illegal drugs. Her death sentence remains in Indonesia as the NUPL strives to bring her home safe and alive.


Corpuz said leaders like Aquino are only good at lying. He said its claim of whatever success in land reform is also clearly a lie, as their bloody history in the hacienda attests to. He vowed that peasants in the hacienda won’t stop with their protests against new bogus land reform “until the liar steps down.”

Putting an end to the illusion

George San Mateo of drivers’ group Piston said in Mendiola that “if there were still people from Aquino’s camp who proclaim his being “hulog ng langit” (gift from heaven) despite his being an out and out pork barrel king, disaster president, Commandeath-in-chief, etc., these people are deluded.”

He echoed what other leaders of progressive groups have been saying, that Aquino should no longer be allowed to remain in his post. “The longer he remains there, the longer would our natural resources be plundered, our working people put at risk, our tillers denied of their land, our people denied of affordable utilities and social services.”

San Mateo warned that if Aquino were not ousted from his post, “whoever he would anoint will surely continue his destructive policies of liberalization and deregulation.”

Teddy Casiño, spokesman of Bagong Alyansang Makabayan, reiterated the historical significance of Labor Day, and the historical role of the working class to free all oppressed and exploited classes. He said this is why groups that recognize this historic role of the working class are always opposing whoever is leading the Philippine government, from the Marcos dictatorship to the succeeding administrations.

“Because these presidents, these administrations, have upheld, supported and sponsored a corrupt system of governance, and maintained this rotten society where only a few families amass wealth and power while the few languish in poverty,” Casiño said in Filipino. He reiterated that under such presidents and governments, wages are pressed down, jobs are hardly created while lands remain concentrated to a few, and local industries are stunted.

“So, if Noynoy says he did not create Veloso’s problems, he is a fool,” Casiño said in Mendiola. “Or he is fooling with us,” he added.


Casiño said even if Noynoy were to be successfully ousted, if he were simply to be replaced by Senate Pres. Franklin Drilon or House Speaker Feliciano Belmonte, the present problematic system would not change.

Casiño reiterated the transition council for peace and reforms that the Noynoy Oust Now wishes to replace him with will start meaningful change. He described this council as a coalition council expected to serve briefly, just for a year or two, and mainly tasked to go after Noynoy’s accountability in Mamasapano, and in other issues.

He said this council must also prepare for a clean and credible election, pass measures that will introduce democracy and transparency, such as the Freedom of Information Act and Whistleblowers’ Act. He added the council is tasked as well to scrap all one-sided agreements with imperialist countries which the succeeding puppet governments have signed and approved.

“Noynoy Oust Now is just a part of a long-term struggle for change,” Casiño said.

That change involves “destroying the social base of imperialism and landlordism,” according to Kilusang Magbubukid ng Pilipinas chairman Rafael Mariano. Freeing farmers from bondage to landlords, he said, will unleash materials for industrialization and usher in genuine peace. He said a genuine land reform will strengthen the basic alliance of workers and peasants.

Ferdie Gaite, chairman of public sector confederation Courage, said genuine change will mean implementing national industrialization, and that would have to start with transferring control of vital and strategic industries to the state, broadening the manufacturing base of the country and as such, scrapping the laws that forced it to become mere assembly points for export-oriented production.

He said this industrialization, under a democratic coalition government, will do the opposite of today’s government: “it will increase wages, create jobs, respect rights and develop social services.”