You Are Here: Home → 2015 → May → 14 → Fact-finding mission reports torture, food blockade by soldiers in Blaan communities 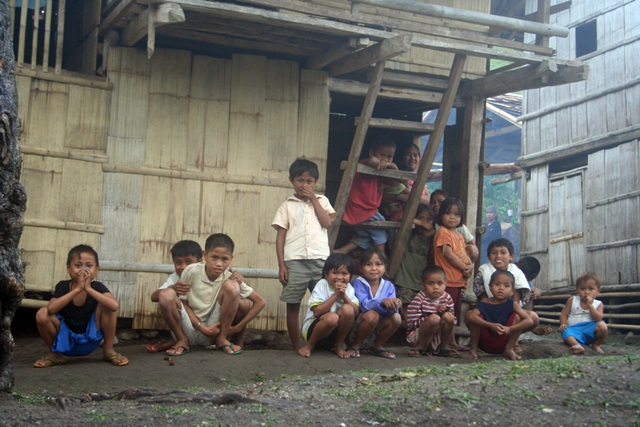 The soldiers clipped farmer Ruben Wating’s left thumbnail with pliers. Then, another soldier pulled out a .45-caliber gun, aimed it at his forehead, and threatened to kill him.

MANILA – A fact-finding mission in the provinces of Sarangani and Davao Occidental documented human rights violations against the indigenous communities of Blaan, committed by the Philippine Army’s 73rd Infantry Battalion.

The mission was held on April 27 to 29, and documented incidents from March 27 to April 10 in various communities of Malapatan, Sarangani and Malita, Davao Occidental.

At least 12 sitios (sub-villages) were subjected to economic blockade, 11 sitios, to illegal military encampment and one, aeral bombing, the mission said.

“A number of these cases happened after the Armed Forces of the Philippines failed to pursue members of the New People’s Army,” Cristina Palabay, Karapatan secretary general, said in a statement. “Unable to find and fight their equal, the AFP has time and again resorted to retaliatory violence, victimizing the unarmed population. Let us not allow such barbarity to continue.” 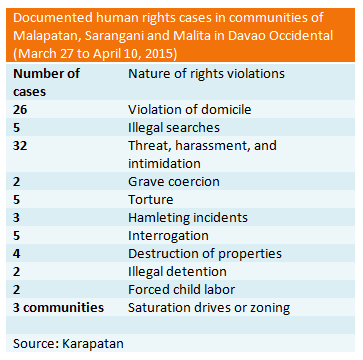 Ruben Wating, 35, a Blaan farmer and a member of the group Kafye de lagad (literally, for the good of the farm) of Upper Suyan village in Malapatan, Sarangani told the fact-finding team that on April 5, three soldiers from the 73rd Infantry Batallion accused him of being an New People’s Army (NPA) fighter who was involved in an encounter with government troops on April 2.

In Karapatan’s fact sheet, Wating identified the three soldiers as Ricky Sotal, Toto Sukal, a certain Gober, who came with a policeman. The four forced him to join them in drinking the two gallons of tuba that they brought. At around 9 p.m., the four brought him to a nearby creek, where they kicked him in the neck, causing him to fall into the water. They accused him of being a rebel, but Wating insisted that he is a civilian.

The soldiers, not contented with his answer, clipped Wating’s left thumbnail with pliers. Then, another soldier pulled out a .45-caliber gun, aimed it at his forehead, and threatened to kill him.

The soldiers then told him to get up and run. But Wating did not move an inch, afraid that the soldiers would shoot him. They brought him to the house of his neighbor, Boyet Lanab, where a soldier punched him on his right shoulder.

Soldiers told him to guide them in their operation against the NPA fighters. One smashed Wating’s hands with a bamboo stick.

Before allowing Wating to return home, one soldier hit his back with a belt, and told him not to go anywhere. His house was closely guarded by at least six soldiers.

Two days later, soldiers came and told Wating to “surrender” in their military camp. But the latter refused to go, saying that soldiers do not have any warrant of arrest and that he did not do anything wrong. The soldiers then left him.

Peasant brothers Masulong and Jimmy Ambat were also among the victims of torture, economic blockade and harassment from the military.

On April 4, at around 6 p.m., the two went to Pag-asa village in the municipality of Alabel, Sarangani to buy 25 kilos of rice. On their way home, the two were blocked at Maybaka subvillage in Upper Suyan by at least 21 soldiers from the 73rd IB, led by a certain Lt. Jordan and Cpl. Peter Maquiling.

The soldiers asked who told them to buy 25 kilos of rice.

“These are ours, sir, for our family’s consumption,” they told the soldiers who then retorted, “That is not yours. It is for the NPAs.”

Soldiers confiscated their rice then tortured and and interrogated them about the NPAs.
The soldiers punched the brothers, and threatened them with a knife and a rifle.

One soldier even placed a grenade at Jimmy’s side and told him that they would let it explode if he would not tell the truth.

During the nine-hour interrogation, soldiers threw away the 25 kilos of rice, confiscated two packs of cigarattes, two packs of instant noodles and Masulong’s wallet. They even tore his village residence certificate.

Soldiers then accompanied Jimmy and Masulong to their home in Kabaklod subvillage where they saw that the two has a small store. The soldiers then apologized, saying, “We thought it was for the NPAs.”

On April 5, at around 6 a.m., nine soldiers, one of whom was a certain Cpl. Maquiling, knocked at the house of Rexan Tagi, a resident of Kabaklod subvillage in Upper Suyan.

Tagi related to the fact-finding team that soldiers asked him to boil water for their coffee. While they were having coffee, another soldier whom he identified as a certain “PL” asked him to go outside for a talk. Then, they interrogated him about the NPAs.

“I do not know where the NPAs are, Sir,” he told the soldier.

“Do not try to pretend, just tell the truth – you are the contact of the NPA here,” said a soldier. “We know they left a gun in your house.” Another called Tagi a liar and kicked him twice in the back.

A soldier even told Tagi to surrender the gun and he will be rewarded with a cellphone and $23. But the latter insisted that there was no gun in his house.

Soldiers then searched the house, trampling on their clothes, the family’s sleeping mat and even Tagi’s father, Manda who was lying down, sick. His mother Joma nearly fainted with fear.

Harrassments among the Blaan tribe was earlier reported by Bulatlat.com back in 2011 when the military encamped in the heart of the Dlumay village in Upper Suyan. The soldiers tagged the alternative school, Blaan Literacy School and Learning Center, as an NPA school.

Palabay said all military units involved in the reported human rights violations should be pulled out from communities. The 73rd IB and Maj. Gen. Eduardo Año, she added, must be made accountable for the rights violations against the Blaan tribe.

The 73rd IB is under the 10th Infantry Division of the Philippine Army, headed by Año, one of the high-ranking military officials implicated in the enforced disappearance of farmer-activist Jonas Burgos.