“It appears that Aquino broke his silence on the issue more than two weeks after the factory fire to take a swipe at political adversaries at the local level and whitewash the accountability of Labor Sec. Rosalinda Baldoz and Local Government Sec. Mar Roxas for the factory fire.”

After the government concluded its investigation, President Aquino held a press conference June 1, more than two weeks after the fire that recorded an official death toll of 72. Aquino hinted at going after just the capitalists of Kentex Manufacturing, Inc. and the local government of Valenzuela City. The latter, through Valenzuela City mayor Rex Gatchalian, immediately reacted against it, claiming they are just abiding by the Bureau of Fire Protection’s recommendations.

Although the KMU and the various labor institutions and groups who condoled with the Kentex fire victims’ families have been calling for justice and have found Kentex Manufacturing liable in their fact-finding mission a day after the fire, it stressed that Kentex or the local government are not the only parties accountable for the factory fire.


In fact, sitting before Aquino when he broke his silence over the Kentex factory fire were those “most responsible for the death of many workers,” said Elmer “Bong” Labog, chairperson of KMU. He was referring to Labor Sec. Rosalinda Baldoz of the Department of Labor and Employment and Local Government Sec. Mar Roxas of the Department of Interior and Local Government.

Labog said Baldoz should be held responsible because the labor department she leads granted Kentex a certificate of compliance with occupational health and safety standards and general labor standards just a few months before the factory fire.

He added Roxas, Aquino’s Interior secretary and touted likely bet in the next presidential elections, “should be held responsible because the Bureau of Fire Protection, an agency under Roxas, allowed Kentex to operate despite the factory’s non-compliance with fire safety standards and failed to notify the city government of Valenzuela of the said non-compliance.”

Aquino covering up his administration’s sins against workers?

De Jesus said it was very unbecoming of the president of the republic to take on the roles of crime scene investigator, judge, jury, and executioner all rolled into one at a press conference in the palace complete with a model or mockup plan of the gutted building. 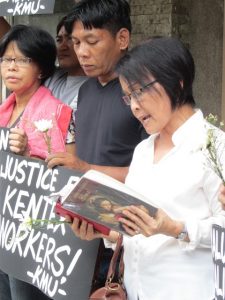 “By micromanaging the investigations into the deadly Kentex factory fire, President Aquino seems to be desperate in covering up his five-year track record of systematically destroying the welfare of Filipino workers,” De Jesus said.

The Gabriela lawmaker has previously said that the government is “liable not only for the deaths accruing from its negligence in implementing occupational health safety standards but more so because of its inutility in providing decent jobs for the people.”

She added that past workplace fires and even building collapses have victimized women and minors who, she said, are forced to be employed as stay-in workers. The fire prevention and labor agencies tasked to ensure safety and check violations, she added, ignored the prison-like architecture of thousands of sweatshops that treat workers as slaves and suspected pilferers of goods.

The non-government Institute for Occupational Health and Safety for Development (IOHSAD), one of the workplace safety institutions that conducted a probe into the causes of the Kentex factory fire and the condition of the workers before and after the fire, found President Aquino’s performance at the press conference “disturbing.”

The group reminded the public how Malacañang said on May 16 that “heads will roll” for those to be found lenient in implementing labor and safety standards. It asked Aquino now, where are those heads?

Two weeks after the fire, threats are all the public heard from the president, and even these were directed only to a narrow section of those believed responsible for the killer factory fire. Nadia de Leon, IOHSAD Advocacy Officer, said “Pres. Aquino’s report reflects just how little the government values occupational health and safety and workers’ basic right to life. Pinning the blame on the local government and exempting the Labor Department from any criminal liability and serious breach of duty trivialize this great loss of lives and blatant disrespect of worker’s rights.”

Most labor groups and NGOs supporting workers are one in saying that the Kentex fire is not an isolated case and not the first in highlighting the government’s neglect of worker’s right to occupational health and safety.


“The long list of work-related deaths under President Aquino’s term shows the government’s failure to ensure safe working conditions for workers,” added De Leon of IOHSAD. Under Aquino, IOHSAD cited the death of 10 workers in Eton Towers in 2011, six workers in Keppel Shipyard in 2011, 17 workers in Novo Jeans and Shirts in 2012, eight workers in Asia Micro Tech in 2014 and 11 workers in Guiguinto in 2015. These are just the workplace accidents that got reported.

Lito Ustarez, KMU vice-chairperson, pointed to “the problem of President Aquino refusing to acknowledge his government’s failure to review policies on this matter,” even when Aquino was making grand, general promises in the furor generated by Kentex fire deaths.

He also said such measures are included already in House Bill 4635 or Workers Safety and Health Inspection and Employers Liability Decree (Worker’s SHIELD) filed by Rep. Emmi De Jesus and Rep Luzviminda Ilagan of Gabriela Women’s Party in June 2014. But the problem, he said, is “the Aquino government has refused to heed these demands, prioritizing the profit-making of capitalists over workers’ safety and rights.”

“DOLE’s Department Order No. 131-13 (Rules on Labor Laws Compliance System) serves as a license for employers to disregard workers’ safety,” said De Leon of IOHSAD in another statement.

Like many labor groups, she said compliance with occupational health and safety standards should not be based on the employers’ willingness to disclose their violations.

“The Labor Department should take the main responsibility for inspecting workplaces and ensuring that conditions are safe for workers,” De Leon added.

Unfortunately, even the efforts geared to improve labor inspection as it is being held today under the government’s labor laws compliance system seem to have failed the Kentex fire victims. At the May 29 inquiry of the House of Representatives Committee on Labor and Employment on Kentex fire, DOLE-NCR Director Alex Avila and the Labor Laws Compliance Officers (LLCO) who performed the inspection were unable to present proof to validate the Certificate of Compliance they issued to Kentex eight months before the fire.

The officer reportedly said he was not able to take pictures because he had not brought his government-issued tablet at the inspection. Gadgets were issued to 574 Labor Laws Compliance Officers as part of the $1M grant of the International Labor Organization to the Labor Department last year, to support its new labor laws compliance system.

The labor center and the families of Kentex factory fire victims and survivors have repeatedly picketed the headquarters of the labor department to denounce its policies which they blame for the killer fire. They have also called for Baldoz’s resignation, saying she has presided over “killer workplaces.”

They blamed fatal accidents in the workplace on the Aquino administration’s policies, which, they said, amounted to abandoning genuine labor inspection and compliance of labor standards and occupational health and safety standards.

Two batches of Kentex fire survivors and families of fire victims have also already filed labor cases against Kentex with the labor department. With the KMU, they are planning also to file criminal cases this time to include Labor Secretary Baldoz as one of the respondents.

“It appears Aquino broke his silence on the issue more than two weeks after the factory fire just to take a swipe at political adversaries at the local level and whitewash the accountability of Baldoz and Roxas for the factory fire,” Labog concluded.