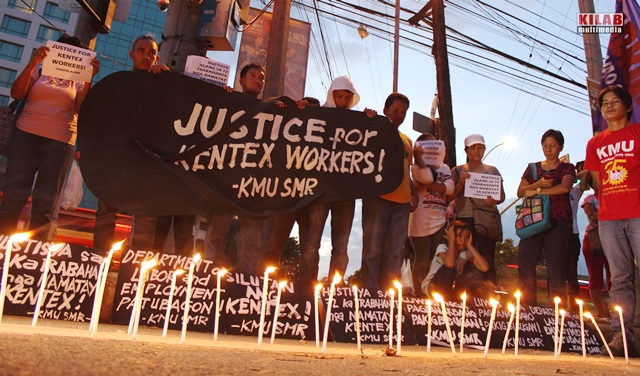 “Labor Secretary Rosalinda Baldoz has perpetuated a climate of impunity when it comes to compliance with occupational health and safety standards.”

A week later, after 72 people were confirmed trapped and killed in the no-fire exit, no-fire drill and no-fire alarm factory, and with relatives and survivors telling the media of labor standards violations by Kentex management, labor groups noted Baldoz’s change of tune.

“It would be foolish to believe the Labor Department’s claim that Kentex violated labor and safety standards after their inspection,” said Joselito Ustarez, vice-president of labor center Kilusang Mayo Uno (KMU), one of the groups that immediately conducted a fact-finding mission in the gutted factory and among the survivors.

Baldoz has said Kentex’s violations might have begun after it received its “Certificate of Compliance” on Sept. 18, 2014.

“There simply was no way Kentex removed the crucial fire exits in the second floor of the building if these had truly existed,” Ustarez said at the workers’ picket in front of the Department of Labor and Employment (DOLE)-National Capital Region office in Malate, May 20. Members of KMU, along with students, women and urban poor marched to the DOLE regional office after marking the eighth death anniversary of veteran labor leader Crispin Beltran in Plaza Miranda. They held a picket in time for DOLE’s holding of a mandatory conference with Kentex and CJC Manpower Services.

The labor center also picketed DOLE offices on Monday May 18, the day they designated as “national day of mourning” to bring to national attention the violations they pointed as the cause of death of 72 workers of Kentex.

KMU viewed Baldoz’s holding of mandatory conferences as just her way of “trying to absolve herself of her crime.“ They said Baldoz has no right to investigate the capitalists of Kentex, as she should be investigated as well.

The owners of Kentex did not attend the DOLE’s mandatory conferences on Monday and this Wednesday May 20. Neither did they attend the hearing of the House Committee of Labor on the biggest factory fire casualty.

Aside from the DOLE admitting Kentex’s violations of occupational health and safety standards, it has initially found fault with CJC Manpower Services. The latter has been supplying Kentex with contractual and “pakyawan” workers. Baldoz said it is not registered with the DOLE.

But to protesting workers in various areas of the country, it is not merely the registration of contracting and outsourcing companies but the contractualization policy itself that should be scrapped.

Citing the death of other workers in earlier fire and accidents that occurred in the workplace — all of which are deemed preventable if standards had been strictly imposed — the KMU said “Baldoz has perpetuated a climate of impunity when it comes to compliance with occupational health and safety standards.”

Under the Aquino government and Labor Secretary Baldoz, Ustarez recalled the death of 17 female workers in a fire that gutted Novo Jeans and Shirts Department Store in Butuan City on May 9, 2012, and the death of eight women workers in a fire that hit Asia Micro Tech warehouse in Pasay City on May 30, 2014. More than 40 construction workers have also been known to have died on their jobs since 2010.

“It does not provide for mandatory inspections and it devolves OHS compliance to companies through ‘self-assessments,”’ said Carlo Olalo, spokesperson of KMU Southern Mindanao.
The labor department’s policy approving various ways of flexible hiring and firing, one of which is in the form of contractualization which also has a corresponding department order from the DOLE, is also blamed for the “climate of impunity” in violating labor standards. DOLE order no 18-A series of 2011, Executive Order 366, among others, detailed how establishments could resort to contractualization.

Striking Tanduay workers from Cabuyao, Laguna said in a statement the “only way to give justice to the 72 victims of the tragedy” is to put an end to contractualization.

“Contractualization killed the Kentex workers. It is a crime that both the government and private companies are guilty of committing for decades now. We do not want to end up dead, neither do we want workers to be dying every day due to low wages, absence of benefits and job security,” said Dante Ragasa, vice president of TUDLA.

Even as the strikers were battling three to five incidences of harassment and violence in the picketline every day since they launched a strike May 18, they also joined the national day of mourning for Kentex workers.

Even the moderate labor groups under the Trade Union Congress of the Philippines also held a picket at the gutted factory on May 20, denouncing the violations in occupational health and safety in Kentex.

The alliance Defend Jobs Philippines composed of workers, women, youth and urban poor, meanwhile, held a day-long series of activities beginning with rallies and live mural painting in front of Kentex factory on May 20. Toward late afternoon, they offered a mass and prayers to Kentex fire victims, saying May 20th is also the 9th day since the fire. They capped their concerted actions with a solidarity walk for justice from Kentex factory to the nearby major intersection of Paso de Blas in Valenzuela City.

The KMU, joined by members of the League of Filipino Students and Anakbayan, characterized Baldoz’ career as Labor Secretary as one “presiding over massacre of workers in workplaces, failing to secure a guilty verdict for the death of workers, much less jailing capitalists responsible for workers’ deaths.”