Amid increased political killings in the Philippines, US-based civil society and advocacy organizations want the US Senate to put back restrictions on military aid to the country.

MANILA – Eighteen civil society, church and advocacy organizations based in the United States have asked the US Senate to retain its past legislation restricting military funding to the Philippine government until it addresses the unabated human rights violations.

The groups, which include the New York-based Human Rights Watch and Bagong Alyansang Makabayan-USA, cited the recent spate of killings blamed on suspected state forces.

“To lift the current restrictions now would be sending the wrong message to the Philippine government: that the US is unconcerned by serious continuing rights abuses by the Philippine Army and that the Army should no longer be treated as the abusive force that it continues to be,” the groups wrote in its letter addressed to US Senator Lindsey Graham, dated July 1.

Early this year, the Department of Foreign Affairs announced that the US government had lifted the cap on Philippine military funding since 2014, releasing $50 million in military aid for that year. The arrest of the fugitive ex-military official Jovito Palparan Jr. was reportedly a factor in the dramatic fund increase.

This year, the US pledged to release $40 million. News reports attributed the increase in military aid to the country’s maritime dispute with China.

Since 2008, the US Senate cut down foreign military financing (FMF) to the Philippines, due to alleged involvement of suspected military agents in extrajudicial killings (EJKs) and various human rights violations in the country.

Despite the restrictions, the civil society organizations noted the Philippine government’s response to address human rights violations as “insufficient.”

“EJKs and other violent abuses implicating members of security forces remain a serious problem,” read the groups’ letter to the US senate.

Members of the armed forces and paramilitary forces, the letter added, “have been responsible for numerous unlawful attacks on activists, human rights defenders, priests and other church workers, and labor organizers. In recent years, environmental activists and tribal leaders have also been targets of assault.”

The letter cited the recent killing of Typhoon Pablo survivor-turned activist Ricky Basig, who was shot dead on June 25 in his home in Baganga town in Davao Oriental. Also in June, three indigenous peasants in Paquibato district in Davao City were killed by soldiers, who claimed they were New People’s Army (NPA) rebels. A peasant couple who were branded by soldiers as NPA supporters in Negros Oriental was brutally killed and burned by suspected soldiers.

“The military typically denies involvement in such attacks, even when there is strong evidence pointing to the involvement of military personnel,” the letter read.

Apart from activist killings, the groups pointed out that the Philippines remains as the third most dangerous place for journalists after Syria and Iraq. The International Federation of Journalists noted that 36 journalists were killed under President Aquino – the most recent was the killing of CNN-Philippines cameraman Jonathan Oldan on June 25.

“While the perpetrators of these crimes and the motives are often unknown, in many instances there are credible allegations of government forces’ complicity,” the letter read, adding that journalists have been killed after receiving death threats from “people believed to be linked with Philippine security forces or local government officials.”

The human rights group Alliance for the Advancement of People’s Rights (Karapatan) said that under the Aquino administration, it had documented 238 victims of EJK, from July 2010 to March 2015. Under the nine-year Arroyo administration, Karapatan documented 1,205 EJK victims. 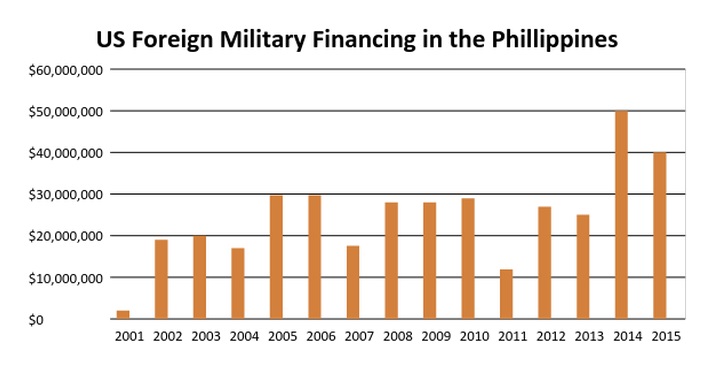 A 2008 US Congressional Research Service (CRS) report stated that its foreign military funding (FMF) declined from its peak in 1985 to 1997, as funds were shifted to respond to natural disasters and humanitarian crises. But the aid began to increase again in 2001, after the 9/11 attack, when the US declared its so-called global war against terror.

Human Rights Watch reported that the US FMF to the Philippines increased from $2 million in 2001 to $19 million in 2002, following former President Gloria Macapagal Arroyo’s pledge to support the US global war against terror. In 2003, there was only a $1 million increase, but accompanied by a $25 million emergency support, according to a report.

The FMF for 2002 and 2003 both constituted 80 percent of the total military aid that the US provided in the entire East Asia and the Pacific region.

Former US Ambassador Harry Thomas Jr. said the Philippine government received a total of $507 million in military assistance from 2001 to 2010. The CRS report stated that the Philippines received the most dramatic increases in the region.

In 2008, the US Senate imposed restriction on military aid to the Philippines to pressure the Arroyo administration to address the involvement of state security forces in various human rights violations.

The Consolidated Appropriations Act 2008 stated that its $30 million budget would be slashed by $2 million until the Philippine government implements the recommendations of Philip Alston, United Nations Special Rapporteur on Extrajudicial, Summary and Arbitrary Executions, who visited the country in 2007.

There was no drastic decrease in military aid in the next two years that followed, with $28 million released for 2009, and $29 million for 2010, according to a 2015 US Department of State report.

In 2011, the US Senate decreased the military aid to the Philippines to $11.9 million.

From 2009 to 2015, the Philippines received $211 million out of the $389 million or at least 54 percent of the total US foreign military funding in the East Asia and Pacific region.

US foreign aid takes the form of economic, military and development assistance, aimed chiefly for “US security and democracy-building.”