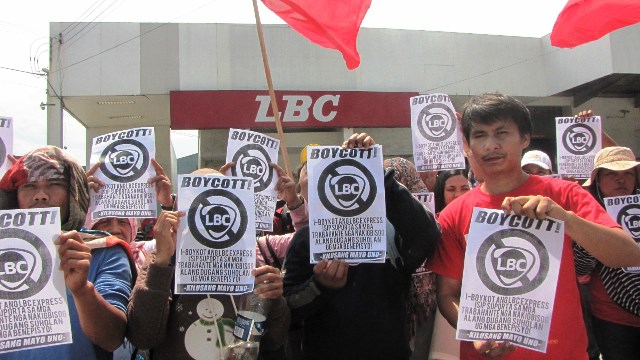 As the LBC management is asking the labor department to assume jurisdiction of the labor dispute to quell the impending strike, the concerned union and supporters in the capital waved “Boycott LBC Express” posters.

MANILA – About a hundred workers of LBC Southeast Mindanao (SEM) in Davao City are gearing to hold a strike soon on the issue of wages in the Araneta-owned courier company. LBC (SEM) is a subsidiary of LBC Express, the Philippines’ largest express courier, cargo and money remittance service company.

In support of their strike preparation, members and affiliates of KMU held separate pickets on Monday, July 6, in front of LBC Express branches in Davao City and Quezon City. They appealed to the public for understanding and support for the LBC workers’ impending strike, saying their demands are “justified.”

Their CBA negotiations had been declared as deadlocked since April this year. Should they push through with their strike, it will affect 26 LBC branches and the delivery hub in Davao City.

LBC has a total of 1,178 branches in the Philippines and “presence in 23 economies.” It was founded by Carlos Araneta in the 50s, who still chairs its board at present, while his son is chief operating officer. It reportedly enjoyed double-digit growth rates in the past years; it also forecasted two-digit growth this year.

In Southeast Mindanao, LBC Express (SEM) employs about 130 people, majority of whom are organized into LBC Davao Employees Union, an affiliate of Association of Democratic Labor Organizations under the Kilusang Mayo Uno (LBCDEU-ADLO-KMU). On June 22, nine in every 10 union members voted to hold a strike if their deadlocked negotiations for a new collective bargaining agreement (CBA) remain unresolved.

For a thin slice of LBC profits

A worker’s right to a decent living is what’s at stake in the LBC workers’ struggle, said Carlo Olalo, spokesperson for KMU Southern Mindanao. 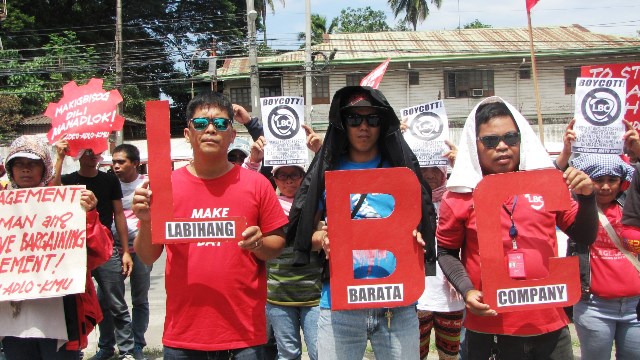 But even before they launch their strike, they already face obstacles like the possibility that the Labor Secretary might assume jurisdiction — the LBC management had asked the Labor Department to do so. Also, amid news of the overwhelming strike vote in LBC SEM, the management announced in the media last week that its services will still continue.

Oliver L. Valentin, LBC SEM (Davao) senior vice president for operations, was quoted as saying the workers are receiving wages and benefits higher than mandated by law and that the company has been at the CBA (collective bargaining agreement) negotiation table with the union for the past few months to discuss and determine “the most mutually-beneficial agreement between the two parties.”

The union president, Butch Gajudo, clarified in a statement the problem is not LBC’s absence in negotiations but “lack of sincerity.”

Gajudo said the union has provided “realistic and fair demands for increases in wages and benefits for all its members this year.” They initially proposed a 15 percent salary hike and benefits amounting to P9.299 million ($205,346) for two years, but during negotiations, it lowered its demand to seven percent or P3.154 million ($69,649) total and eventually at five percent totaling P2.739 million ($60,484) for two years.

Their demand represents “only a four per cent cut in LBC SEM’s P57.8 million ($1.3 million) net income for 2013-2014 from its 27 branches in the Southeastern Mindanao region alone,” the national labor center KMU said in a statement Monday.

On the other hand, LBC Express (SEM) reportedly continued to refute the union’s assertions about the amount of its profit for years 2013 to 2014.

Yet, reports said the entire LBC Express’ revenues from courier services and money remittances for 2014 have increased 13 percent, amounting to a total of P8.2 billion ($182 million), despite the problem of port congestion in Manila that year. As more OFWs send balikbayan boxes and remittances home to their families in the Philippines, the company expects another double-digit growth this year.

Meanwhile, the LBC management has been committing unfair labor practices, aside from “dilatory tactics in the negotiating table,” the union president said.

Last year, LBC SEM’s union members number up to 121. This year, it has dropped to 93. Gajudo said many union officers have resigned due to harassment and punitive actions of the management.

As the LBC management is asking the labor department to assume jurisdiction of the labor dispute, the concerned union and supporters in the capital waved “Boycott LBC Express” posters. They urged the public to temporarily shun the company’s services until the labor dispute is resolved.

Olalo in Davao City appealed to the public not to listen to LBC’s “vilification campaign against the workers.”

The labor leader also appealed to the clients of LBC Express to “unite and stand with the workers in their fight for a just salary increase and additional benefits.” He encouraged the public to sympathize with LBC workers in the event it does launch the strike.