The first barrier consisted of sharp razor wire (or concertina wire) atop concrete barriers. The second were steel barriers. The third were rows of policemen armed for riot; the fourth were container vans; the fifth were firetrucks, and behind all these were rows again of policemen and some soldiers. They put these in a portion of Commonwealth Avenue and Batasan Road. Soldiers with long firearms also patrolled the elevated footbridges where the protesters held the program near Ever Gotesco mall, Commonwealth.

All these turned Commonwealth Avenue into a “fortress,” or as some passersby commented, a “warzone.”

It did not stop the protesters, though. Despite the intensified repression they reported in the weeks leading to Aquino’s last SONA, they went ahead to deliver what they call as the “real SONA.” 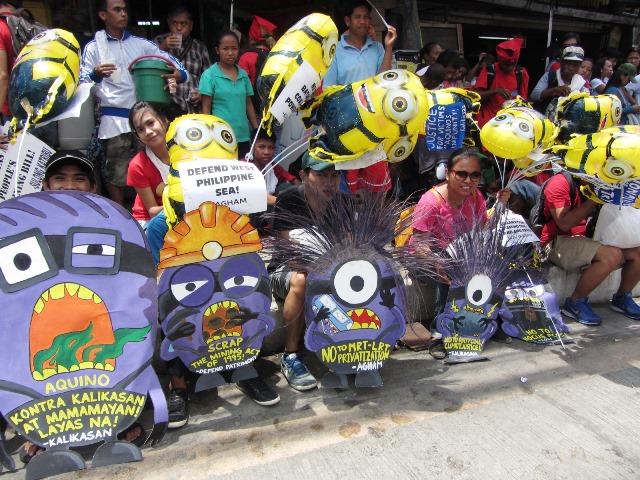 The delegations from Central Luzon and Southern Tagalog who arrived in the capital the night before marched as early to Commonwealth. They were soon joined by members of various progressive organizations from Metro Manila. In the face of armed and armored policemen backed by soldiers with high-powered rifles, they came “armed” with placards and streamers, “minion” balloons and huge yellow ribbons “awarding” President Aquino’s “legacy” in terms of pork barrel, criminal negligence, holding on to Hacienda Luisita and other lands, human rights violations, among others.

But before slugging through the barriers, the protesters endured a heavy downpour that soaked many through their clothes and forced them to go barefoot.

The protesters brought wooden placards as big as the policemen’s shield. On it were their calls, and their condemnation of President Aquino’s record in the past five years. They skirmished at least three times with the police before they managed to advance and begin their program for the real State of the Nation.

First, they skirmished and a few were hurt when the delegation from Southern Tagalog positioned themselves early morning near Ever Gotesco; second and third simultaneously happened when the drenched marchers coming from Tandang Sora broke free from the north-bound “garrisoned” road where the police had clearly expected to herd them, and they marched instead at the west-bound lane of Commonwealth Avenue; at the same time, the protesters who arrived ahead marched back to get nearer the arriving protesters. To merge, the two groups each battled phalanxes of the police, and in the process forced to remove concrete barriers, container vans and trucks.

In the skirmishes, the wooden placards served the protesters as shield, but the rallyists did not have truncheons like the police. Many were hurt but not seriously. The workers reported one of them was badly hurt when he was “swallowed” or pulled behind the police shields and beaten up.

Protesters told Bulatlat.com that they heard from the side of the police, “Huwag n’yo masyado bugbugin, nandyan ang media.” (Don’t beat him too hard, the media are around.)


The police shouted at the protesters: “Namemerwisyo kayo, di kayo nagpapadaan.” (You’re inconveniencing others by blocking their way).”

“But it’s you who blocked Commonwealth in the first place,” the protesters countered.

Some protesters who jumped into the truck used by the police to block the west-bound lane of Commonwealth transformed it into their platform from which they asked the police, “please, just stand aside and let us pass through to end this.”

When later, the truck was removed, the protesters clapped and cheered and happily marched returning to the north-bound lane of Commonwealth for their program.

Using a thin placard like an umbrella, 58-year old Leo Santiago of Anakpawis told Bulatlat.com he joins the street SONA every year.

“I listen to the SONA at the street every year. I just want to hear the SONA of the president and the street saying the same. But I don’t feel the growth he (the president) was saying. We’ve become even poorer. What the SONA here (in the street) says is more real,” Santiago said.

Santiago used to be a pedicab driver. But as more jobless people resorted to driving a pedicab for a living, he shifted to selling embutido. He says he earns P200 ($4.40) for his whole day’s work.


Students in their twenties from Pasig said they have school that day but they decided to join the protest, they even joined the struggle to break through the police barricades and some of them had been hurt.

“We prioritized coming here because we have to help deliver the message about our real condition, our problem with K to 12, our parent’s problems finding jobs,” said a 21-year old student from Pasig.

As they listened to the real SONA program, the police lining the other lane of Commonwealth Avenue behind razor wires continued to make their presence felt. They jeered when Karapatan secretary general Cristina Palabay tackled the participation of police and soldiers in making it “a crime to speak out freely.”

The police beat at their truncheons when Palabay described their behavior in Commonwealth as “feeling Rambo.” But when Palabay asked the crowd of protesters how they should respond in the face of repression, and the protesters resoundingly chanted in unison, “Makibaka, Huwag Matakot” (Struggle, don’t be afraid), the police were quiet.

There were fewer chances for mosh pit dancing unlike last year, but the crowd was just as responsive to the speeches. They laughed when a very serious president of contractuals’ organization in Tanduay, Ansi Are, happened to call President Aquino as ‘panot’ (bald smooth). They nodded in agreement to what he said about Aquino’s cronies, such as Lucio Tan, but some groaned when it was mentioned there is a call to boycott Tanduay products.

The protesters responded that yes, they would support the struggle of Kentex workers for justice. “Sila yung nalitson” (they’re burned alive), an elderly protester told his juniors beside him.

Do you feel that economic growth? Sol Pillas of Migrante asked the protesters at one point, and they immediately shouted no, followed by murmurs of how untrue that is in their case.
Did your wage increase under Aquino? Bong Labog of Kilusang Mayo Uno asked the protesters. The crowd responded with grumbles. A construction worker from Migrante told Bulatlat.com, his wages have even gone down.

The crowd was especially more alert when Mae Paner, called Juana Change, took to the stage.

When she was followed by a sing and dance number from Sining Lila, who sang “Noynoy You’re Worthless” to the tune of “Worth It” even the policemen watched and snickered.