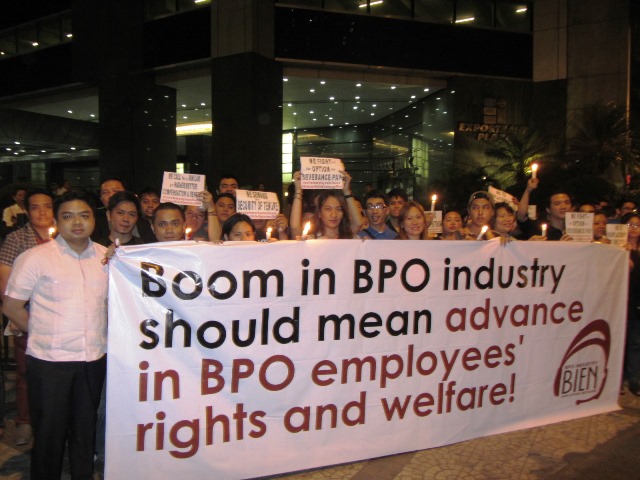 “You need to get yourselves organized. After all, it’s a constitutionally guaranteed right.” – UP Prof. Patricia R.P. Salvador Daway

MANILA – Local government secretary and Liberal Party presidential bet Mar Roxas may have been advertising himself as “Mr BPO,” but according to a group of BPO employees, he should not “steal” the credit for whatever achievements the BPOs had achieved because of the hardworking BPO employees.

In one of his political advertisements Roxas was projected as “Mr. BPO”. Employees’ group BIEN, however, reminded him that “the growth of the Business Process Outsourcing (BPO) is mainly because of the resiliency and stellar service that BPO workers have put into our jobs.” BIEN is BPO Industry Employees Network, a broad network and accredited labor association of BPO workers with members from the top 70 BPO companies and major BPO hubs across the country.

“Our clients and investors choose the Philippines, despite the competitive global market, mainly because Filipino workers are top-of-the-class customer service oriented people,” BIEN said in a statement Aug. 3. As proof, it said the BPO workers would even risk life and limb just to go to work even during disasters such as at the height of the Yolanda devastation, the Cebu-Bohol earthquake, and many other calamities. The BPO workers continued working at the time to serve overseas-based clients, “despite our continued calls for Malacañang to intervene and enforce work suspension even on our industry,” BIEN recalled.

“When they say go to work, you can’t say anything. We have work on Philippine holidays. We have work on US holidays… In the end we don’t really have holidays,” a BPO employee servicing US-based clients for eight years said late last year during the general assembly of BIEN.

Just over a month ago, at a lecture in labor law focusing on BPO workers’ rights and status in UP Diliman’s College of Law, BPO employees shared cases about not receiving their holiday pay, or enjoying the holiday only if they had manually filed to either get their holiday pay, or spend the day off work.

“There are more than thousands of us employees. But only few of us dared approach the office for our day-off, or some just didn’t have the time or energy anymore for the repeated trips to the office,” Noel Apuan, an employee in the BPO industry for 10 years now, told Bulatlat.com.

UP Professor and former Associate Dean of College of Law Patricia R.P. Salvador Daway suggested that there should be an arrangement in policies about holidays which the BPO employees must enjoy, while still addressing the profitability of the company and the viability of BPO industry.

Regarding reports of BPO employees, some of whom are working students from UP, saying that forming a union is prohibited in their BPOs, Daway said that that is considered an unfair labor practice, because the BPO employees are being denied of a labor organization that could take the cudgel for them.

“You need to get yourselves organized. After all, it’s a constitutionally guaranteed right,” Daway told the hundred or so students and BPO employees who listened to her lecture.

Daway also reiterated that if work quotas were not attained once, and the supervisor terminated the agents from employment because of that, the affected employees can go (file a case) before the National Labor Relations Commission (NLRC). She said the reason (for termination) should have been “habitual and gross” violations, and not just a one-time failure in meeting the quota. Cases like that were also shared during the open forum.

Local Government Secretary Mar Roxas, who some reports call as the “father” of BPO industry, is being blamed for the violations on the rights of BPO employees. In a statement, Ian Porquia, president of BIEN Philippines, said that, “If we are to credit Mar Roxas on his efforts for the BPO industry, it is the ‘self-regulating practice’ which many companies are doing today.” 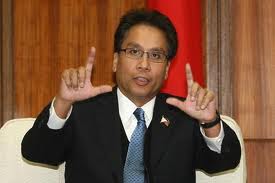 Porquia blamed Roxas and the policy of “self-regulation” he left behind as the reason why BPO workers are still required today to go to work even during calamities.

“When Roxas was still secretary of the Department of Trade and Industry, he, together with the IT-Business Process Outsourcing Association of the Philippines (IT BPAP), started enforcing the ‘self-regulating’ policy in the BPO. Through this, most policies being implemented by BPO companies are either left unchecked by state agencies or are not being regulated by the Department of Labor and Employment.”

Because of this ‘self-regulating practice,’ Porquia said it is not surprising that almost every day, a case is being filed at the National Labor Relations Commission (NLRC) against any BPO company for unfair labor practices.
At UP Prof. Daway’s lecture last May on BPO workers’ rights, a BPO employee shared that he intended to file another case against his present BPO employer. He had won a separate case of illegal dismissal against his former BPO employer. Now, his concern is that he just discovered that his current BPO has not been remitting their SSS and Philhealth payments.

“If there is such a legacy that Mar Roxas left with the BPO sector, it is in opening the doors to further exploitation and abuses of BPO workers,” Porquia of BIEN Philippines concluded. His group asked Roxas to stop using the gains of BPO workers to advance his political career.