The political satire of Juana Change 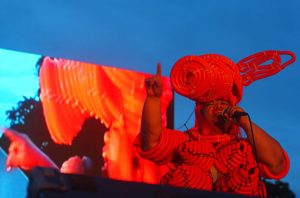 “Artists are very effective in criticism because the attack is different, its penetration to the audience’s consciousness is different. Art goes straight to the heart, to the psyche.”

MANILA — One cannot ignore her presence.

Juana Change would always stand out in a crowd of protesters, her appearance being her message.

During President Aquino’s sixth State of the Nation Address, she went to the demonstration wearing a teacher’s uniform. A huge report card was placed above her head, showing a 65% grade for Aquino’s overall performance as president.

At the height of the pork barrel scandal, she came to Rizal Park (formerly Luneta) in Manila in her red-orange costume — pig ears, snout and a barrel around her body. The next day, Juana Change was on the front page of almost all newspapers.

Juana Change — Mae Paner in real life — is arguably the most popular satirist in the Philippines today. She has brought political satire to the street protests and the internet.

The making of Juana Change

Juana Change first came out in a YouTube video in December 2008. At that time, President Gloria Macapagal-Arroyo was facing a string of corruption scandals.

Before this, Paner and other professionals gathered to discuss what they could do for the country. In what Paner called as a “visioning exercise,” one of the participants wrote on the board, “Wanna Change.” She suggested replacing “Wanna” with “Juana,” a name representative of Filipinos. As most of them are artists, they all agreed to utilize their talents for their advocacy for social transformation.

Despite limitations in resources, the team is able to produce short-length videos. It was a challenge to produce high-quality videos with a tight budget because all of them were used to doing well-funded productions.

But the videos kept coming. Over good food, Paner and writers Rody Vera and Raymond Lee would brainstorm ideas based on the burning issues of the day.

Paner and her creative team tap their colleagues in the film and advertising industry for the videos — all for pro bono work. Paner jokingly branded her advocacy as “puro abono” advocacy as she would often shell out her own money for her costumes and for the video production.

In 2009, Paner decided to support presidential candidate Benigno Aquino III, who went on to assume power in June 2010.

In January 2011, however, Juana Change uploaded the “Porsche” video on YouTube. The video shows Paner as “Juana Change,” an old woman, a nurse, a college student and a crippled man talking about President Aquino’s Porsche worth P4.5 million. As of this writing, the video has garnered over 110,000 views.

Paner said she was only being vigilant. Besides, she poured her talent, time and resources into Aquino’s campaign, hoping that things would change for the better.

Apparently, Aquino did not live up to her expectations. Paner lost all her hopes when news reports on the pork barrel scam and the controversial Disbursement Acceleration Program (DAP) broke.

In one of the protest actions in Ayala, Makati, Paner, dressed as a market vendor, delivered a fiery speech,“Noynoy, kapag ’di ka tunay na pagbabago, pipitpitin ko bayag mo. (Noynoy, if you are not for genuine change, I’ll crush your balls.).”

The audience roared in laughter.

Paner said she has always been a communicator.

“It was in PETA [Philippine Educational Theater Association] that I learned what love for country means,” Paner said.

Her involvement in PETA made her realize how effective art is in criticizing the powers-that-be.

“It’s very threatening to the administration,” she said. “Artists are very effective in criticism because the attack is different, its penetration to the audience’s consciousness is different. Art goes straight to the heart, to the psyche.”

She was arrested and detained in 1984 but was eventually released. She was only 21 then, a fresh graduate of Psychology from the University of Santo Tomas.

“Laughter is inherent among Filipinos,” Paner said. “We want to make light of situations that are difficult…but criticisms against those in power is there.”

She said the sorry state of the nation inspires her. “For me, this makes me want to do what I do. While others are inspired by the rainbow and other things that are pleasant, I draw my inspiration from poverty,” she said.

Juana Change’s “public sphere” includes public assemblies and the internet. She recognizes that the two are distinct venues; each has its own advantages and disadvantages.

She said that in live performances, there is a real connection between her and her audience and she gets real-time reactions. The applauses affirm the effectiveness of her satire.

However, the reach is limited.

In her YouTube videos, she does not get instant reaction but the reach is wider.

“When it gets viral, it becomes like a virus that has a life on its own. You can no longer control who uses the material,” she said.

The videos get in the hands of government and paid trolls, and at the same time, they also become accessible to students, teachers and other netizens. They can view the videos anytime; the message is virtually replicated many times over.

Juana Change gets threats for what she does but she has chosen to ignore them.

Just this May, she, along with other activists, was barred from entering the halls of Batasan Pambansa complex. This despite the Constitutional guarantees on the right to free speech and free expression.

For deciding to be “an advocate for social transformation,” Paner said she had a lot of trade-offs. Since she devoted most of her time for her advocacy, she has not earned as much as she used to. For being critical of President Aquino, she burned bridges with friends who have chosen to work for the administration, such as Jim Paredes and Leah Navarro.

Still, she has no regrets because she has also gained the respect of people she looks up to.

She is now busy planning for the national tour of satirical play “Pinatay si Mayor!” where she portrays the character of Mayor Vangie Palaban who runs and wins, and eventually gets defeated by a pig in the elections.

Juana Change hopes her political satire would continue to entertain, inform, and educate the citizenry to act for genuine social change.