Then & Now in APEC-induced ‘development’

19 years since APEC summit in PH

See also: APEC govts’ designs on SMEs, women seen as a bane rather than a boon

MANILA – Early APEC meetings held this year in Cebu, Boracay and Manila have produced “initiatives” and plans for final approval in the November meeting of top economic leaders of 21 member governments. They packaged their draft initiatives as helpful to economies in the Asia Pacific region. But various groups campaigning for #PHFightAPEC said last week the Filipino people are not to be deceived by the upcoming conference’s declared thrusts on food security, SME’s (Small-Medium Enterprises), so-called blue economy, and disaster resilience.

Similarly aimed buzzwords have been used in past APEC gatherings, but despite faithfully abiding by these initiatives, the Philippine economy has remained stunted at pre-industrialized levels, according to member organizations of PCAIG (People’s Campaign Against APEC and Imperialist Globalization) 2015. Worse, amid continuing liberalization, they said, most economic data show Philippine productive sectors have even shrunk over the years.

“As we have done with the offensives of neoliberal policies in the past decades, we and the Filipino people will expose and resist APEC,” declared the conveners of PCAIG.

APEC as a US-led formation

PCAIG member organizations see the US government as the force controlling and mainly benefitting from most trade and investment deals being forged or further liberalized via APEC.

In its brochure announcing counter-APEC meetings, conferences and protest actions in November, PCAIG bucked the upbeat announcements of the Aquino administration, saying its hosting of the 2015 APEC summit is actually bringing to the fore “the collusion between the US and its local lackeys led by Pres. Benigno S. Aquino in the imperialist plunder of the Philippines and intensified repression and war against our own people.” 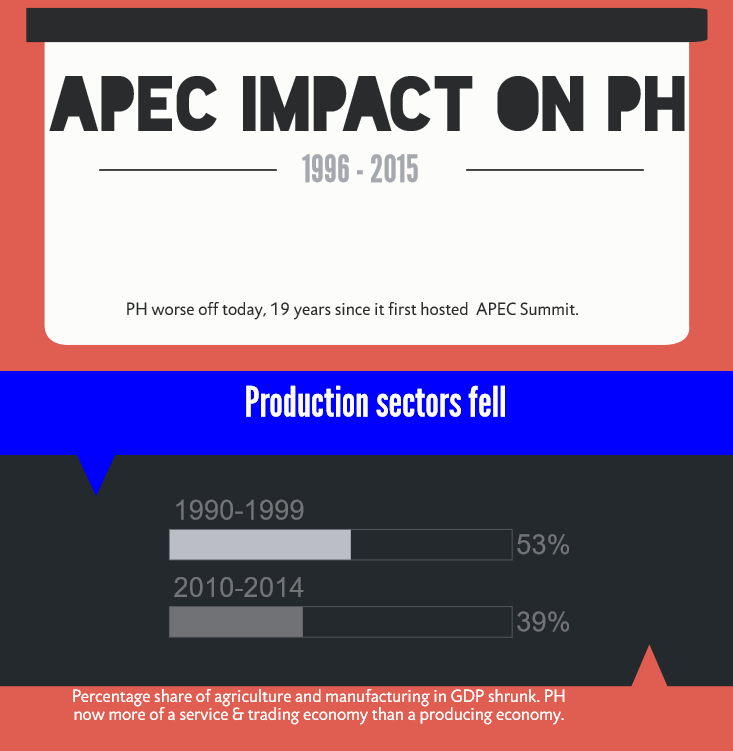 When the youth from LFS (League of Filipino Students), a member of PCAIG, marked their 38th anniversary, they brought a mock logo of APEC, which read “US-led,” in a protest at the United States embassy in Manila on Sept. 11. At the time, APEC finance ministers were meeting in Cebu “to assess the economic and financial outlook” and launch what they call as Cebu Action Plan, a list of initiatives claiming to combat inequality and bring positive outcomes of greater regional integration.

Such promises were condemned as “newfangled lies” by students and workers. In a separate statement, labor center Kilusang Mayo Uno (KMU) recalled that when the Asia Pacific Economic Cooperation Summit was held in the Philippines in 1996, the Filipino workers and people were also bombarded with similar lies.

“APEC strengthened the US-Ramos regime’s slogan of ‘Philippines 2000’, which promised economic development and the country’s emergence as a Newly-Industrializing Country or NIC. Filipinos were told that there will be more decent jobs with the entry of foreign investments into the country,” said Jerome Adonis, KMU secretary-general.

In this year’s APEC, he said the new-fangled lies are “inclusive growth” through so-called “structural reforms.” But, citing nearly two decades since the last APEC Summit was held in the Philippines, Adonis said facts today confirm that “APEC is a weapon of big foreign and local capitalists against the Filipino workers and people.”

Non-government economic thinktank Ibon Foundation said the Aquino government is being presented in the media as globalization’s poster child. Under his presidency, the Philippines received praise for having reported fastest growth rates and for being the most business-friendly in Asia-Pacific region.

But the Philippines’ glowing GDP figures were recorded amid highest unemployment and underemployment rates (6.8 percent and 18.4 percent respectively, based on conservative official estimates); highest poverty incidence (officially at 25.8 percent even as independent estimates pegged it at more than 70 percent); greatest inequality rates in the Philippines; and intensifying repression of opponents of neoliberal policies, said Liza Maza, spokesperson of PCAIG 2015.

Ibon said unemployment and underemployment combined rose from 8.3 million in 1996 to 12.2 million in 2015, representing the worst job crisis in Philippine history.

Such degree of jobs crisis is unprecedented, and a look at the dire consequences of neoliberal globalization on the Philippines’ industrial and agricultural sectors show why job creation and job quality have been falling. It is in these strategic sectors that real economic growth is hoped to show through.

Due to APEC-facilitated trade liberalization, the Philippines has aggressively reduced tariffs that by 2012, it has some of the lowest agricultural and non-agricultural tariffs among countries in Asia, Ibon Foundation said in a statement. With such “globalization onslaught,” the share of agricultural production in gross domestic product shrunk from an average of 21.3 percent (or a fifth) in years 1991 to 2000 to just a tenth (10.8 percent) in 2011 to 2014. Ibon noted that it’s the lowest in the country’s history.

Manufacturing’s role in any prospect of Philippine development has also been pulled down by APEC’s investment liberalization, said Ibon.

On one hand, the industry is so foreign dominated that almost 70 percent of earnings yearly from 2004 to 2013 are with transnational corporations. On the other hand, the more numerous and bigger employers, the largely Filipino owned small and medium enterprises have continuously seen their ranks diminished by thousands of closure each year since 2000, according to Ibon research.

In summary, PCAIG said Philippine production has dropped drastically since the country first hosted APEC in 1996. It said the share of the production sectors was at 53 percent of the GDP in the 1990s, but it fell to just 39 percent in the period 2010 to 2014.

This collapsed production is the reason why joblessness and poverty remain stubbornly high, Maza of PCAIG said. In 2015, unemployment and underemployment rose to 12.2 million, the highest so far recorded.

PCAIG and progressive groups want the Philippine government to reconsider its implementation of globalization and free market policies being pushed by APEC. In a press conference last week in Quezon City, it challenged the Aquino government to do the following in the upcoming APEC summit: rectify its costly policy mistakes that prevented the Philippines from taking the sovereign development path to real industrialization.